The complex design of the Affordable Care Act, combined with a strong concentration in the hospital market and active Republican sabotage efforts, has created a dynamic where most people on the individual market would be better off with a private insurance monopoly. That is, for millions of low income Americans, more competition on the exchanges would be a bad thing. To understand why, we need to look closely at how Obamacare subsidies are set and how insurers can and do exploit the subsidy formulas.

ACA’s Competition Theory
The core theory behind the ACA’s exchanges was that a market for private insurers would drive down premiums. At first appearance this seems to work. Looking at all counties using Healthcare.gov (38 states), the ones with more insurers tended to have lower premiums. Additionally, among people paying full price for insurance, the more insurers, the more people who bought coverage. 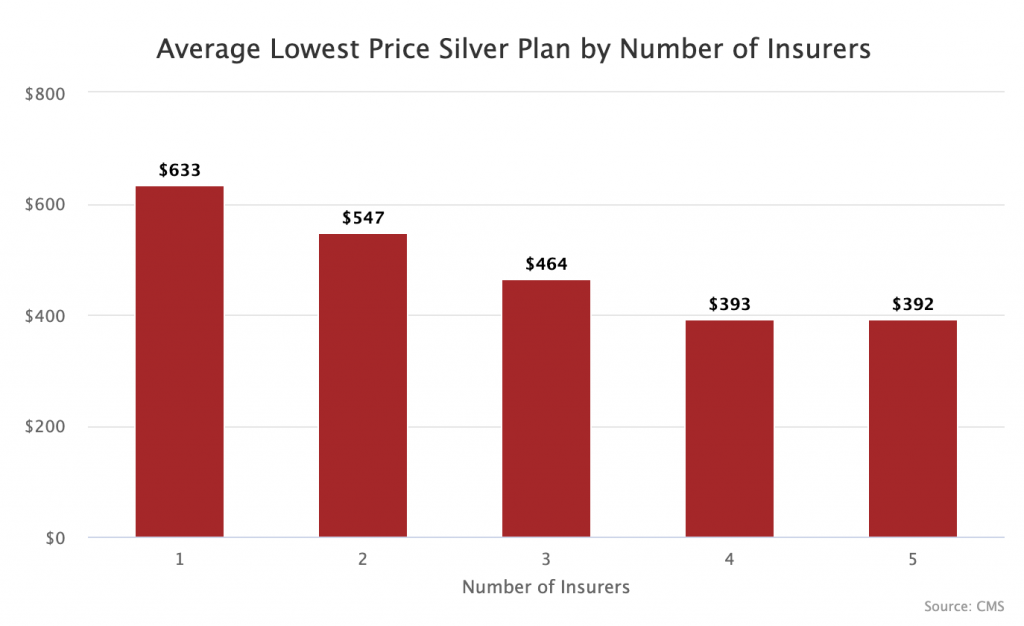 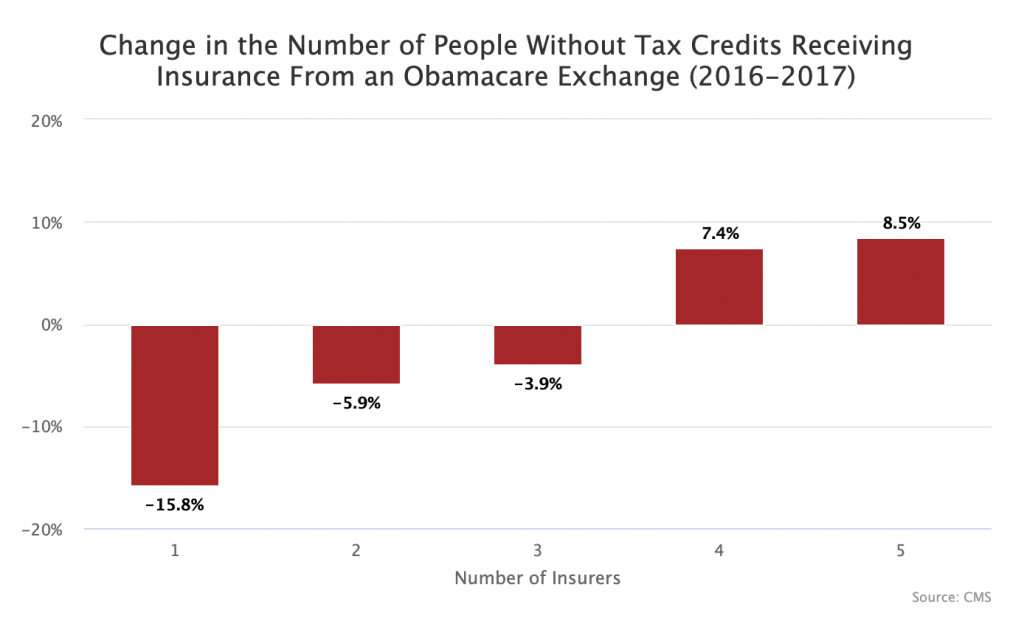 The Problem
However, there is a problem with this simplistic analysis: less than one-sixth of people who buy individual coverage on Healthcare.gov pay the full price. While the drafters of the law thought the exchanges would be highly popular and used extensively by businesses and individuals, they ended up being more of a program of last resort.

The vast majority of people who use Healthcare.gov have an income below 400 percent of the federal poverty level, meaning that they qualify for subsidies through the Advance Premium Tax Credit (APTC). The way these subsidies are designed actually makes competition worse for low-income individuals (as explained below). This is likely why counties with just one insurer saw a smaller net drop in total coverage than counties with two or three insurers. 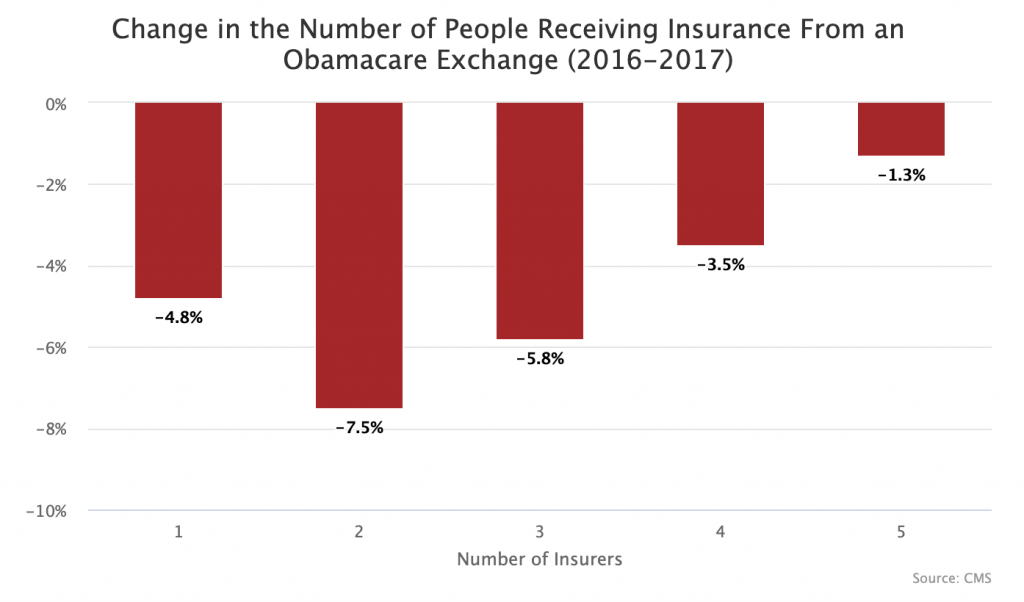 In a competitive market with multiple insurers, the price difference between the lowest cost silver plan and the SLCSP is normally just a few dollars. For example, Genesee County, Michigan was one of the most competitive counties on Healthcare.gov last year. It featured seven insurers offering 35 silver plans. The lowest price silver plan for a single adult age 50 was $329.90 a month, just $11 less than the second lowest silver plan, which was $341.34 a month.

However, if a health insurer knows that they are going to be the only insurer on the exchange, they also know that whatever silver plans they offer will be both the lowest cost silver plan and SLCSP. By creating only one very cheap silver plan and one expensive silver plan (a strategy I call “silver stretching”), they can maximize the amount of the subsidies that their customers receive, which the customers can then spend on any of their plans, including the very cheap silver plan. It is important insurers do this specifically with their silver plans because the ACA contains another separate subsidy that low income individuals are only eligible for if they choose a silver plan.

Example from Tennessee
Tennessee shows how this works out in the extreme. From 2016 to 2017, every county in Tennessee lost at least one insurer. This left Blue Cross Blue Shield (BCBS) of Tennessee as the sole insurer on the exchange in roughly half the state while other parts of the state had limited competition involving just two insurers. BCBS appears to have aggressively engaged in silver stretching in the counties where it was a monopoly insurer.

In Hardeman County, BCBS offered just two silver plans for an individual age 50. One cost $732 per month, the other $868. Since $868 is the SLCSP, individual subsidies were based on that plan. A person with an income of $30,000 would be expected to pay around $207 towards this plan and thus get a tax credit of $661 a month to cover the rest. This means they could use their $661 subsidy to buy the cheaper $732 silver plan for just $71 per month.

By comparison, in neighboring Fayette County, Cigna and Humana were competing on the exchange. The competition helped assure that the lowest cost silver plan was $556 a month and the SLCSP was $582 a month. This means a 50 year old person making $30,000 in this county qualified for a tax credit of $375 ($582 – $207). As a result, they would need to pay $181 per month for the cheapest $556 silver plan.

Moreover, in markets where there is some competition but not enough to ensure a convergence of silver plan prices, the structure of the ACA subsidies can encourage insurers to employ strategies that intentionally undercut the subsidies of low-income individuals. I call this “silver squeezing.” For example, in Dickinson County, Kansas BCBS only competed with Medica. BCBS decided to offer just two silver policies, a BlueCare Solutions Simple Silver plan for $505 a month and a nearly identical BlueCare Solutions Silver plan for $506 a month. In this market, our theoretical person with an income of $30,000 per year would need to pay $206 for the cheapest silver plan.

Why would BCBS post virtually identical silver plans at virtually identical prices in the same market? Because their only competitor in that market was Medica whose cheapest silver plan was $631. By posting two silver plans, BCBS is able to ensure that the subsidies in that market were based on its $506 plan, which would make Medica’s plans much less affordable to individuals on the exchanges. Had BCBS only posted its $505 plan, the subsidies in Dickinson County would have been pegged to Medica’s $631 plan. This would have helped individuals in that exchange but reduced BCBS’s market share.

In states where monopoly insurers seem to be exploiting the ACA’s subsidy design, the difference between the cheapest and second cheapest silver plan in single-insurer markets is substantially larger than in multi-insurer markets.

In Tennessee, a 50 year old individual who qualifies for tax credits in a monopoly county gets around $900 more each year in subsidies than an identical individual in a multi-insurer county. Thus, it is not surprising that, in Tennessee counties where BCBS gamed the system, exchange enrollment dropped by just 7.94 percent from 2016 to 2017, while in other counties enrollment dropped by 17.49 percent.

Tennessee is the sad map of our future
What all of the above analysis shows is that counties with monopoly insurers charge higher overall premiums and use silver stretching to drive up subsidy amounts. This sort of practice is good for the vast majority of people on the exchange whose income is low enough to qualify for subsidies, but it’s obviously bad for the small minority who pay full price.

Tennessee’s health insurance situation has another quirk that makes it a great indicator for what the future of the American health system will look like. In TN, the state government has allowed the Tennessee Farm Bureau to offer a non-exchange health insurance plan that is not subject to Obamacare minimum coverage regulations. The existence of this plan has effectively enabled healthy people who make too much to qualify for subsidies to escape the exchange, leaving the exchanges with subsidized individuals and sick unsubsidized individuals. President Trump’s new rule allowing “short term” plans to run 364 days is basically designed to recreate this dynamic across much of the country.

A little competition can be bad and a lot of competition is mostly impossible
When thinking about the health care system going forward, we need to realize that competition between a small number of insurers on an exchange can paradoxically be worse for a majority of people who will use Healthcare.gov than widespread private insurance monopolies. Thus, attempts to “make Obamacare better” by trying to marginally increase competition could easily do more harm than good. It is only when there is a large degree of competition (four or more insurers) on an exchange that this dynamic changes, but getting substantial competition in much of the country is completely infeasible. And even in 4+ insurer markets, it’s still the case that subsidized users will be worse off.

Since we require each insurer to negotiate provider rates individually with each hospital network, competition among a large number of insurers is only really possible in heavily populated areas which also have competitive hospital networks. Thanks to rural hospitals being de facto monopolies and the high and growing level of market concentration among many urban hospital networks, that does not exist in much of the country. The main leverage an insurer has over a hospital are threats to exclude them from their network, but if the hospital is a local monopoly that threat is hollow.

The ACA was based off of Massachusetts’ health care law, but Massachusetts is unique since the whole state has a relatively high population density and a high level of hospital competition. It is also a state with a history of aggressive regulatory oversight to prevent insurers from exploiting loopholes. Indeed, many of the problems of the ACA can be traced back to the fact that it was designed around unique health care market dynamics that cannot exist in most of the country.

Given the way subsidies work and the problems that will result from the repeal of the individual mandate and the expansion of short-term health care plans, the least bad option for most going forward is probably private insurance monopolies. We just have to hope that the monopolies that emerge are smart enough to exploit the law’s design to increase the level of help low-income people are getting.