The US welfare system was not equipped for the rapid loss of labor income caused when the economy shut down in late March. One specific shortfall, the limitations of state unemployment insurance (UI) systems, was resolved in part by a federal program that expanded eligibility for UI benefits and increased the amount of benefits by $600 per week. This recently-ended program is often discussed as an individual benefit for unemployed workers. Less discussed are all of the family members of the unemployed who are also depending on these payments to survive.

By design, the US welfare system promotes employment and rarely provides an unconditional income to people who cannot or should not be working, such as children, students, caregivers, and persons with work-limiting disabilities. The major exception are pension payments to the elderly, which the Social Security program does a good job of providing. Other countries have gone further than we have, building welfare systems that provide payments to cover the expenses of children, for example. Without a welfare system providing a living income to all, many nonworking people in the US rely on workers in their family to meet their basic needs.

Families with non-workers are, by definition, less able to provide labor, on a per person basis. The combination of less labor income and no or meager welfare income means families that contain nonworkers have the relative disadvantage of less income per person. One way to see this general effect is by calculating the average weekly hours worked per family member using the monthly Current Population Survey (CPS). In addition to calculating an overall average, the CPS allows for the identification of hours worked by families that contain one or more of the following: children, students, persons who report a disability or being unable to work due to disability or illness, unpaid caregivers, the unemployed and underutilized, the self-employed, and the elderly. 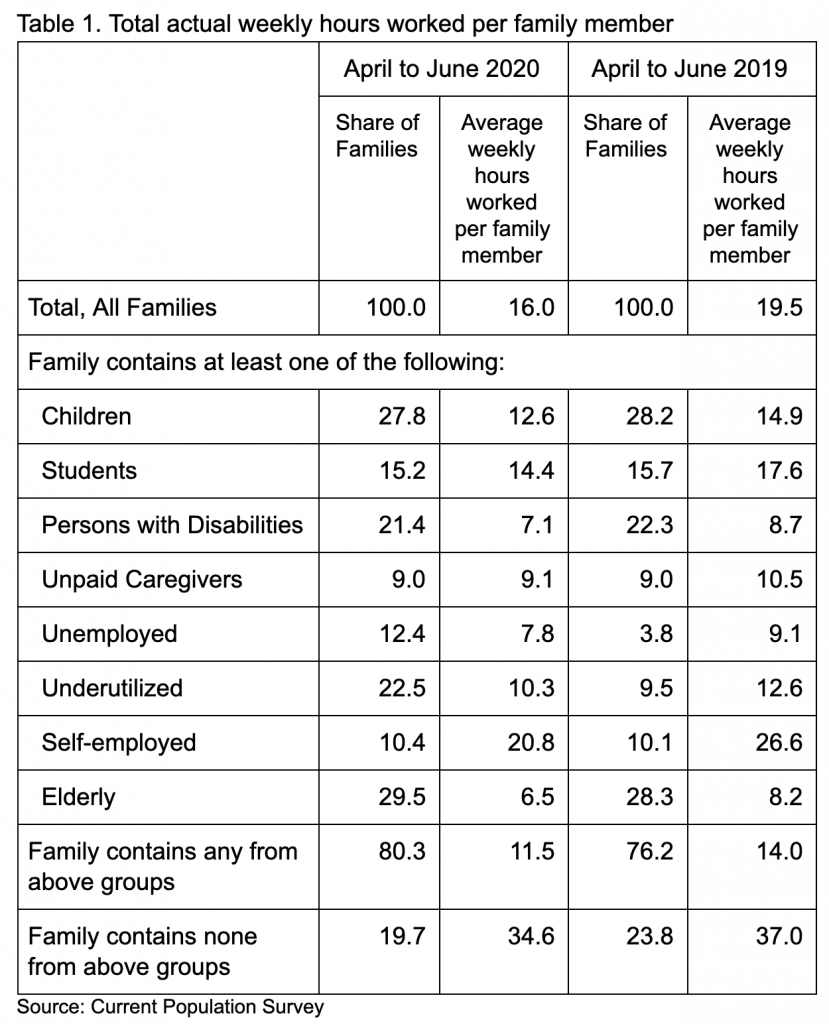 Data covering April to June 2019 and data covering the same three months of 2020 during the US COVID-19 outbreak both show around three times as much labor provided per family member by families without any member in the categories described in the table. During April to June 2019, families without members in these categories worked an average of 37 hours per family member per week, compared to 34.6 hours in 2020. Hours worked fell by 6.5 percent during the pandemic, but are still roughly equivalent to each family member having a full-time job and are likely sufficient for avoiding poverty, even at low wages.

In contrast, the 2019 data show only 14 hours of work per family member per week on average for the families with at least one person in the categories described in the table. For the COVID period one year later the hours per family member fall to an average of 11.5 per week, an 18 percent reduction and a level at which labor income is insufficient for avoiding poverty at low wages. Additionally, the share of families with at least one person in any of the groups increased to 80.3 percent in 2020 from 76.2 percent the year prior, as people who had previously been providing labor income to their families became unemployed and underutilized.

For families that include persons with disabilities or illness, the hours of market labor provided per person per week are even lower, with an average of 7.6 hours per week during April to June 2020 and 8.7 during the same months of 2019. Some in this group receive disability income, but some in the group also have care needs provided for by family or may have risks that limit family members from providing labor during a pandemic. Likewise, though the elderly group likely receives a livable income through social security, the pandemic would seemingly disproportionately limit how much family members living with elderly people can work if the labor would pose health risks to the elderly.

The work-focused design of the US welfare system is in part why an expansion of UI benefits gets income to families. Because US welfare policy emphasizes labor income as the source of financial support for families, and UI can replace labor income (or not), ramped up UI can handle the job of maintaining or increasing a pre-COVID-19 level of financial support for families. Thinking about labor income as family income shows why expanding benefits that replace labor income helps families. Considering the relative disadvantage of some families and just how far labor income can be stretched in a family that includes people who have a good reason to not work, generous UI benefits make sense, especially in this moment.

Number of People in Unemployed Families

Data on the unemployed, a measure that undercounts those affected by the pandemic, show an average of 20.5 million unemployed during April to June 2020, compared to 5.9 million during April to June 2019. However, also counting those who live in the same family as the unemployed shows 49.2 million people affected by unemployment in the pandemic, including 11.3 million children, 3.2 million persons with disabilities, 5.9 million students, 1.2 million unpaid caregivers, and 3.3 million elderly. 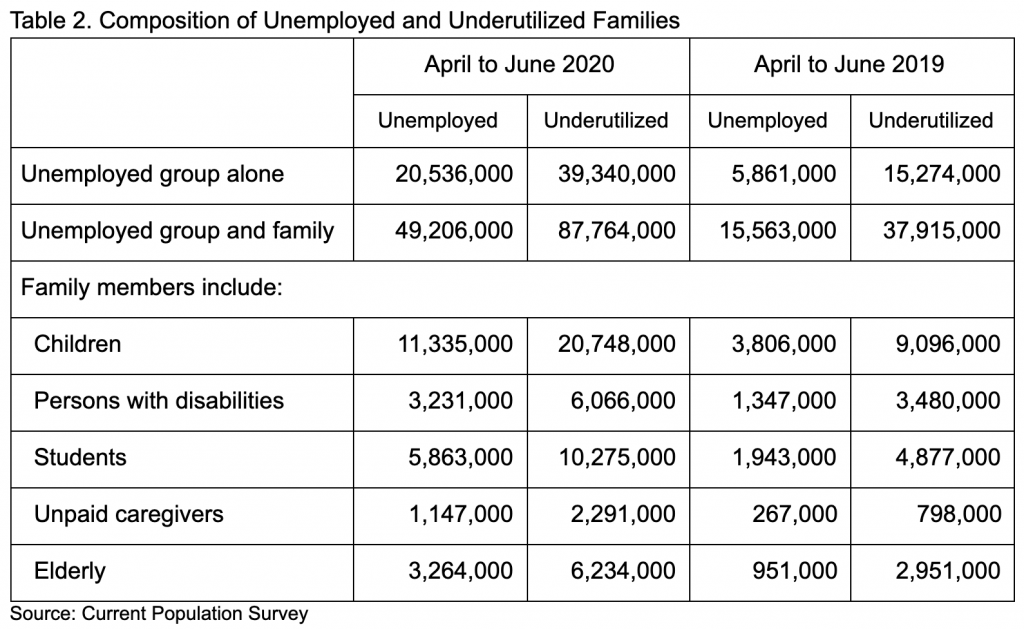 A broader definition of unemployment that includes people who are not on temporary layoff but have given up looking for work, as well as those who would like to work more hours but cannot find more work (underutilization, U6) shows 39.3 million underutilized people on average during April to June 2020, compared to 15.3 million one year prior. The underutilized and their families combine to total 87.8 million, or about one quarter of the US population. The families of the underutilized include 20.8 million children, 6.1 million persons with disabilities, 10.3 million students, 2.3 million unpaid caregivers, and 6.2 million elderly.

The CPS data illustrate points that are somewhat obvious but need emphasizing. The first is that the US system relies on labor income to meet basic family needs even for nonworkers, so a shutdown of the economy that reduces labor income means families lose the income needed to meet their basic needs. Specifically the families that contain nonworkers are particularly hard hit, as they were already splitting the labor income more ways before it was reduced. The second point is that for each unemployed person there are on average 2.4 people in the family unit. If UI benefits are cut, then whole families, including children, the disabled, and unpaid caregivers, will be hurt.