With Obamacare repeal efforts now behind us, the discourse will soon turn towards the single-payer question. In anticipation of that turn, I want to get out ahead of one of the most backwards arguments commonly relied upon by liberal critics of the US single-payer movement. The argument is this: moving to a single-payer system would be hugely disruptive to those with employer-sponsored insurance because it would take away their insurance and replace it with a public alternative.

Here is Paul Krugman making a version of this argument in yesterday’s New York Times:

A far more important consideration is minimizing disruption to the 156 million people who currently get insurance through their employers, and are largely satisfied with their coverage. Moving to single-payer would mean taking away this coverage and imposing new taxes; to make it fly politically you’d have to convince most of these people both that they would save more in premiums than they pay in additional taxes, and that their new coverage would be just as good as the old.

The reason this argument is backwards is because it is the system of employer-sponsored insurance that takes away people’s employer-sponsored insurance. Workers do not stick with the same employer for their entire life, but instead move between employers fairly frequently. Indeed, in 2016, there were around 60 million total job separations in the US. 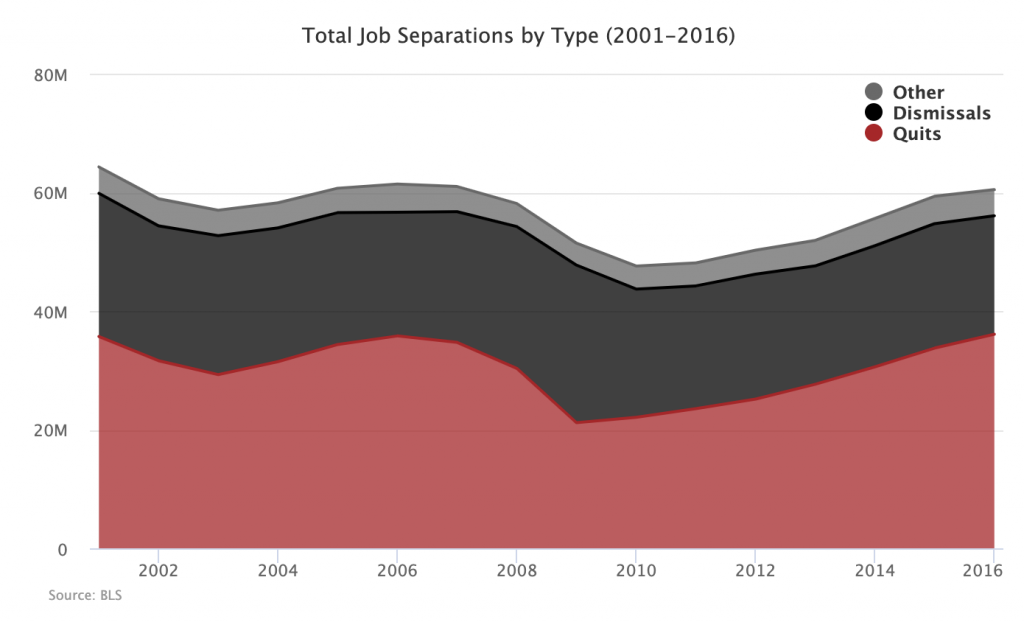 Not every one of these separations ripped away insurance from the separated worker and their family, but many of them did. If it is true that taking away people’s insurance is intolerably disruptive, then it is the system of employer-sponsored insurance that must be eradicated as soon as possible.

Even people who do not switch jobs are vulnerable to losing their health insurance under the employer-sponsored system. For the health insurance market to actually work like a market, participants need to be prepared to change their insurer every single year. Employers need to constantly rethink what insurers they should contract with to provide benefits. And when open enrollment comes around, employees and those on the Obamacare exchanges are supposed to reassess their options and switch to the best insurer on offer. Put simply: a well-functioning private health insurance system requires people to frequently change their insurance situation, which is precisely the evil that Krugman says we need to avoid.

As the name suggests, it is the single-payer system and only the single-payer system that can truly prevent people from having to switch between insurance providers. Krugman is right to say health insurance disruption is a horrible experience to go through. I know first hand how bad it can be. But it is only by replacing our current system with a single public insurer that we can end, once and for all, the scourge of people having their health insurance yanked out from underneath them.