For most of the twentieth century the stock market made only small gains compared to the golden era we are living in today. Since the 2008 financial crisis, markets have soared and, month after month, the major stock indexes have broken new records. In July, the NASDAQ and the S&P 500 broke new all-time highs, with the Dow Jones not far behind. The stock market has not just recovered from the financial crisis. It is making serious bank.

One of the stock market’s most popular cheerleaders has been President Donald Trump. Since July, Trump has sent out eleven tweets championing the strength of the stock market. Two in particular seem to suggest that a rising stock market goes hand in hand with increased wages:

Stock Market at all time high, unemployment at lowest level in years (wages will start going up) and our base has never been stronger!

Former President Barack Obama was a bit more discerning when he compared the stock market to wages. However, he still used the stock market as a yardstick to measure the strength of the economy. A few years after the financial crisis, when the stock market began to pick up, Obama said in his 2011 State of the Union Address:

Two years after the worst recession most of us have ever known, the stock market has come roaring back. Corporate profits are up. The economy is growing again.

Our political leaders seem to suggest a soaring stock market means great things for our country. But, what does the stock market do for average Americans? More specifically, what does it do for their wages? 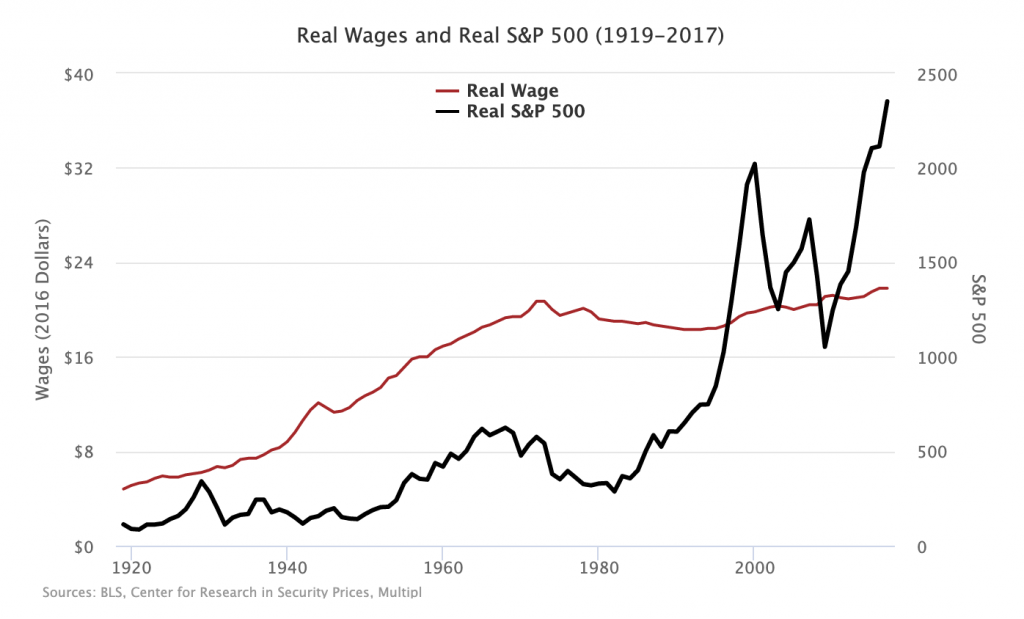 The figure above compares the average real wages of nonsupervisory workers and the real level of the S&P 500 from the early twentieth century to today. Both series are adjusted for inflation using the CPI (pre-1978) and CPI-U-RS (post-1978).

Political leaders seem to believe that what’s good for the stock market is good for the larger economy. But the data show that since the 1980s, when the stock market rises, wages barely move. Today, hourly wage earners – who constitute nearly 60 percent of the workforce – are only making slightly more on average than they did forty years ago. In fact, if the federal minimum wage kept pace with the average hourly wage and average productivity since the late 1960s, it would be over $18 per hour today.

Yet, political and business leaders still proceed as if the stock market is key to measuring the success of the economy. Perhaps the stock market tells us about the prospects of capital owners, but it certainly doesn’t tell us much about the average worker.