After Kamala Harris’ endorsement last week, it seems more and more like favoring a single payer system will become the dominant tendency within the Democratic Party. And for good reason. Most Americans now support such a system, including nearly two-thirds of Democrats. To make single payer happen we are going to need a plan. But before we make a plan, it is helpful to map out the general policy terrain in this area.

1. Current System
For starters, let us look at a simplified schematic of our country’s current system of health insurance. Broadly speaking, money comes into the system through taxes, premiums, foregone wages (a kind of private tax), and out-of-pocket expenses. From there, the taxes are used by federal and state governments to directly fund public health insurance (Medicare, Medicaid, and Other) or to fund subsidies for employer-sponsored insurance and insurance acquired through the individual exchanges. Exchanges and employers use premiums and foregone wages to pump money directly into private health insurers.

Here is how the US population was allocated across the various insurance types in 2015: 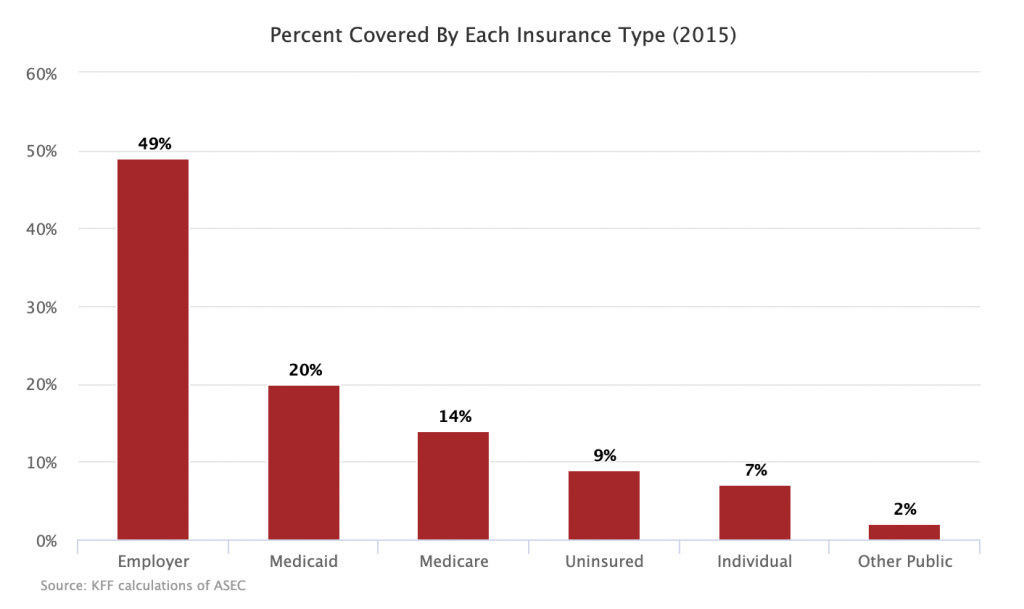 2. Target System
The end goal of single payer advocates is to create a system that looks like this instead: In this system, money comes from federal taxes and then those federal taxes are used to fund the national health insurer (called Medicare here). There is disagreement currently on whether there should also be some cost-sharing in the form of co-pays and deductibles.

3. Potential Paths
One path to single payer is to transition from the current system to the target system in one fell swoop. To do that the federal government would impose additional taxes designed to capture the premiums, foregone wages, and state taxes currently spent into the system. That money would then be combined with existing federal taxes to fund the national health insurer. If the new taxes are more progressive than current funding streams and overall utilization of health services does not expand too much, this approach should cover everyone while leaving most people with more disposable income than they currently have.

The gradualist paths are tricky because some are genuinely intended to reach the single payer end game, while others are only intended to stop the bleeding of the private insurance system and thereby prop it up. Most prominently in the latter camp is the Loser Public Option, which seeks to have the government come in and offer an insurance option only in counties that private insurers have basically abandoned.

With that trickiness noted, here are some of the gradualist paths currently being considered in the discourse.

3a. Medicare Buy-in
Under this proposal, individuals above a certain age (say 50) would be allowed to buy into Medicare coverage at cost and apply towards that cost any subsidies they would otherwise be eligible for on the individual exchanges. Those currently employed could also opt in and have their employer contribute some of the premium cost (through foregone wages) just as employers already contribute some of the premium cost for private employer-sponsored insurance.

Insofar as Medicare is substantially cheaper than private alternatives, this plan should move many on to the public rolls.

3b. Medicaid Buy-in
Under this proposal, states would be allowed to create a buy-in option for Medicaid on the exchanges. As with the Medicare buy-in option above, individuals would be allowed to apply towards the cost of Medicaid any subsidies they would otherwise be eligible for on the individual exchanges. Unlike the Medicare option, however, it does not appear that those proposing this idea intend to allow individuals currently receiving employer-sponsored insurance to opt in.

Insofar as this plan is constrained to those using individual exchanges to get their health insurance and requires state cooperation to expand Medicaid, it is not likely to move that many on to the public rolls.

3c. Separate Public Option
Distinct from the Medicare and Medicaid buy-ins above, this proposal would require the federal government to create a new public health insurer that would then go into private markets and compete for every single customer in those markets. This would mean offering up plans on exchanges and offering up plans that employers can select to cover their employees. This is the most significant part of Pete Stark’s Americare.

Insofar as the federal government could run a more efficient insurance company and insofar as the federal government puts a thumb on the scale for its insurance company by subsidizing it substantially (which it should do if this path is taken), this proposal should result in a massive amount of switching away from private insurers and to the public option.

3d. Kiddie Care
Under this proposal, the federal government would insure everyone under a certain age (say 26) immediately through taxes. This is basically like going straight to the single payer target system above but only for those below the age of 26. The appeal of Kiddie Care is as follows:

Conclusion
It is important to note in conclusion here that the gradual paths are not necessarily in competition with one another. In fact, it would be possible to combine many of them together if you wanted to do so. The purpose of this post is not to favor one or another path, but rather to map out what I think the basic terrain on this issue is at this moment in time.