Critics argue that the elimination of this work would strike an intolerable blow to employment in the country. In reality, the loss of employment would be relatively small compared to the overall economy, should only be temporary, and can be cushioned through unemployment benefits and active labor market policies that help reallocate redundant workers into new jobs.

Existing Labor Turnover
One of the reasons for the pervasiveness of this myth is a lack of understanding of just how many people get separated from their job already every year.

In 2016, 60 million people separated from their job at some point during the year. That is equal to 42 percent of the American workforce. 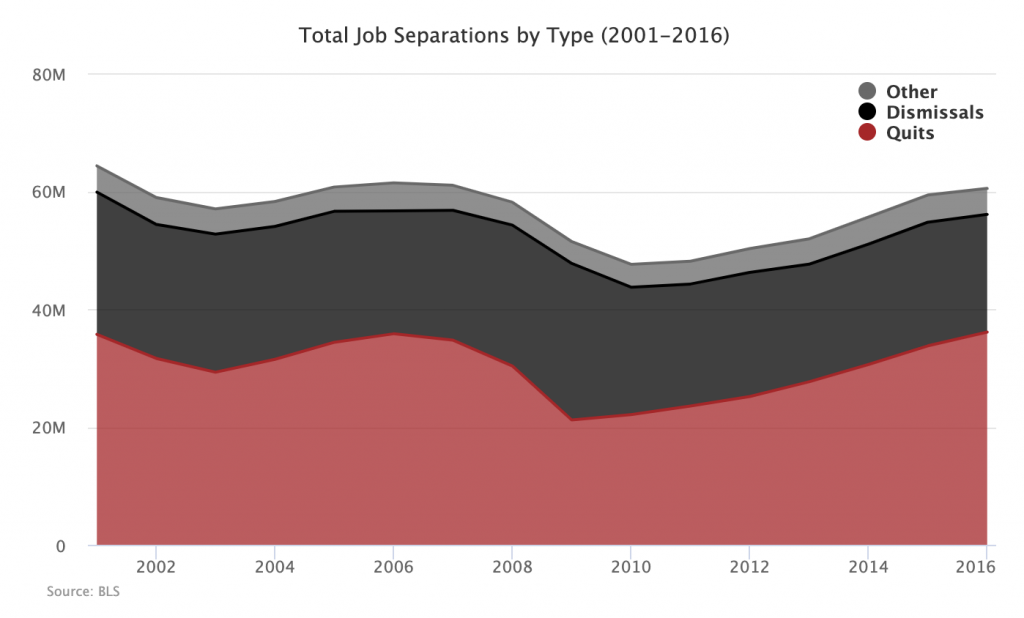 Of course, there is a difference between quitting a job (often for another job already in waiting) and being fired from a job. But if you look only at layoffs and discharges (grouped in the above graph as “dismissals”), you see that, in 2016, 20 million people were fired from their job, representing around 14 percent of the total US workforce.

Being fired from a job without having another job waiting can be a very bad experience, but it is also a very common experience that does not generally have long-term negative economic consequences.

Vulnerable Health Care Employment
Figuring out how many people work “in health care” can be a little tricky.

One way to do it is to look directly at health care professions as defined by the Occupational Employment Statistics (OES) codes. The Kaiser Family Foundation does this in their analysis saying that health care currently employs around 12.7 million people, or 9 percent of the workforce.

The problem with this figure for our purposes here is that it defines health care workers by the work that they do rather than by the establishments they work for. This means it excludes occupation groups like Office and Administrative Support that are the most likely to be made redundant in a single payer transition. Actual health care workers, defined as those providing frontline health care services like doctors, nurses, medical technicians, and so on are the least likely to be made redundant by such a transition.

Another approach is to isolate the relevant establishments in the North American Industry Classification System (NAICS) and then add up the number of people employed by those establishments in the types of professions threatened by bureaucratic streamlining. There are around 2.6 million jobs in Office and Administrative Support within health care provider establishments. This includes every establishment under NAICS 62 excepting social assistance establishments. There are also around 0.4 million total jobs under Direct Health and Medical Insurance Carriers (NAICS 524114). So, under this most liberal of possible interpretations, we are talking about a universe of 3 million jobs.

If you were to lay off all 3 million of those workers, it would be equal to how many workers are already laid off in this country every 54 days.

Of course, you would not lay off anywhere near that many people. Office and Administrative Support jobs include everything from HR jobs, payroll specialists, and people who answer the phone. Only a minority of those 2.6 million jobs are actually involved in the kinds of insurance intermediary work that is threatened by the switch, and even then some of those jobs will still remain in order to bill the national insurer. All 0.4 million medical insurance jobs are threatened, but at least some of those workers will be able to move into the smaller number of similar jobs created by the expansion of the public insurer (e.g. Medicare).

Although it is hard to come up with a precise estimate, the likely number of jobs made redundant by the switch is a few hundred thousand over the course of a few years, this in a country where 1.6 million people are dismissed from their jobs every single month.

Transitional Assistance
Given the small numbers we are talking about in the context of the entire economy and given the fact that office and administrative skills are fairly portable to other sectors (non-health care establishments employ over 19 million people in such jobs), it is not at all clear that there needs to be any special program for reallocating those made redundant by this change. But even if there does not need to be such a program, single payer proposals generally contain one.

For instance, here is how the issue is handled in Conyer’s HR 676:

(e) First Priority In Retraining And Job Placement; 2 Years Of Salary Parity Benefits.—The Program shall provide that clerical, administrative, and billing personnel in insurance companies, doctors offices, hospitals, nursing facilities, and other facilities whose jobs are eliminated due to reduced administration—

(1) should have first priority in retraining and job placement in the new system; and

(2) shall be eligible to receive two years of Medicare For All employment transition benefits with each year’s benefit equal to salary earned during the last 12 months of employment, but shall not exceed $100,000 per year.

How Economic Growth Works
As a closing note, it is worth emphasizing that reallocating workers away from unnecessary tasks and towards new tasks is how economic growth works. Such a reallocation can be painful to those directly affected by it in the short-term, which is why humane societies create systems of unemployment benefits and institutions capable of helping people dislocated by economic changes get into new jobs. But the basic mechanics of finding ways to be more productive with the same amount of labor is fundamentally good.

When people talk about single payer making some health administration workers redundant, they often characterize it as a purely negative thing. It is the “con” of single payer that is nonetheless outweighed by so many countervailing “pros.” But this is not quite right. Making the workers redundant is also a pro insofar as it creates a more prosperous society through greater economic efficiency.

This is the first post in our Single Payer Myths series. The series tackles common arguments against a single payer system one at a time.