Last week, we published our first paper. The subject was Obama’s mishandling of the Great Recession and how that mishandling destroyed middle class wealth and middle class black wealth in particular. The paper does not go into all of Obama’s economic failures, but instead focuses narrowly on the decisions made about how to allocate home value losses. A more comprehensive paper about his overall mismanagement would have included things like the too-small stimulus, the unnecessary sequester deal, and the failure to staff the Federal Reserve with aggressive unemployment-fighters.

When Obama came into office, one of the very first things he had to do was pass a fiscal stimulus plan to deal with the effects of the Great Recession. According to reporting from Noam Scheiber, the job of deciding how big the stimulus should be was initially given to Christy Romer, the soon-to-be chief White House economist. Romer calculated that closing the gap caused by the Great Recession would require a stimulus of $1.7-to-$1.8 trillion and presented her figures to Larry Summers, Obama’s top economic advisor.

Summers decided unilaterally that Romer’s figures were impractical. So Romer got working again, producing a second proposal of $1.2 trillion that also included options for $600 billion and $850 billion. Summers again decided to unilaterally kill the $1.2 trillion proposal and eventually president-elect Obama was presented a choice between $600 billion and $850 billion. The $850 billion figure, which was $1 trillion too small, eventually became the basis for the American Recovery and Reinvestment Act (aka the stimulus bill). So, despite unified Democratic control of government, the Obama administration put forward a stimulus plan that was never going to come anywhere close to solving the macroeconomic problem of the day.

Just a few years after bungling the stimulus, the Obama administration agreed to a sequester arrangement in 2011 that promised to slash government spending by $1.2 trillion between 2013 and 2023. This agreement was struck at a time when the black unemployment rate was an eye-watering 15.7%. By the time the austerity plan hit in 2013, black unemployment was still north of 12%.

Arguably the effects of a stimulus that was $1 trillion too small and $1.2 trillion of austerity could have been counteracted by extremely aggressive monetary policy. But Obama did not pursue this kind of monetary policy, apparently because of the mistaken belief that monetary policy had already “shot its wad.” Obama allowed vacancies at the Federal Reserve to go unfilled rather than packing the Board with people who would pursue aggressive expansionary policy and appointed a Fed chair in Janet Yellen who similarly failed to ramp up monetary policy once in power.

All of these decisions created enormous and unnecessary economic pain, especially for black families. While failed housing policies wiped out middle class black wealth, the failed fiscal and monetary policies kept black unemployment sky high for years longer than it needed to be. 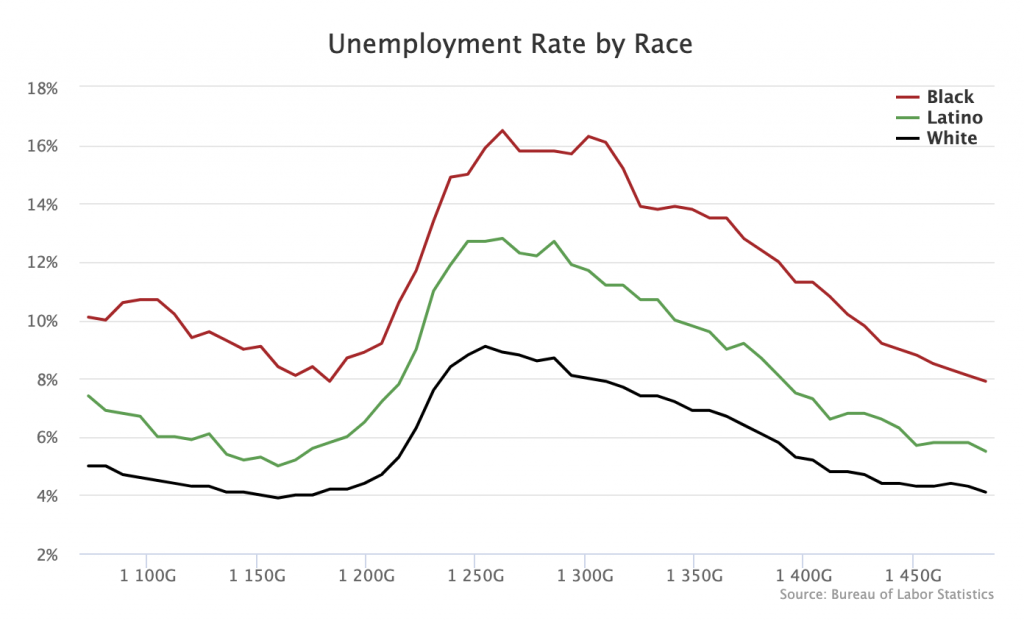 Those who say Obama did a good job of managing the economy often say things like “Obama had 8 straight years of month-over-month job growth.” This is supposed to be an impressive statistic, but when viewed correctly, it is really an indictment of his economic mismanagement and the excruciatingly slow recovery it delivered. Good economic policy would have resulted in massive job gains over a brief period of time after Obama came into office followed by fairly stagnant job numbers after full employment was reached. Instead, the Obama economy only delivered modest job gains each month, so modest in fact that after 8 years in office, we were still not at full employment.

Insofar as black and Latino unemployment is consistently much higher than white unemployment, the labor market pain caused by these bad economic decisions was disproportionately shouldered by communities of color.