Because of the Republican tax plan (bill text, JCT budget effects, JCT distributional effects), the SALT deduction is now capped at $10,000. This cap has attracted some liberal ire and, according to Ben Casselman, sincere state-level efforts are underfoot to undermine it through various state-led shenanigans (see also Dylan Matthews).

As far as I can tell, there are basically two schemes currently being discussed. The first scheme is to allow individuals to make “charitable contributions” to their states and receive a dollar-for-dollar credit on their state taxes for doing so. The second scheme is for states to switch from income taxes to employer-side payroll taxes coupled with earnings-related benefit payments. Since employers can still deduct state-level payroll taxes for federal income tax purposes and individuals can still deduct charitable contributions for federal income tax purposes, both schemes promise to effectively recreate the SALT deduction. 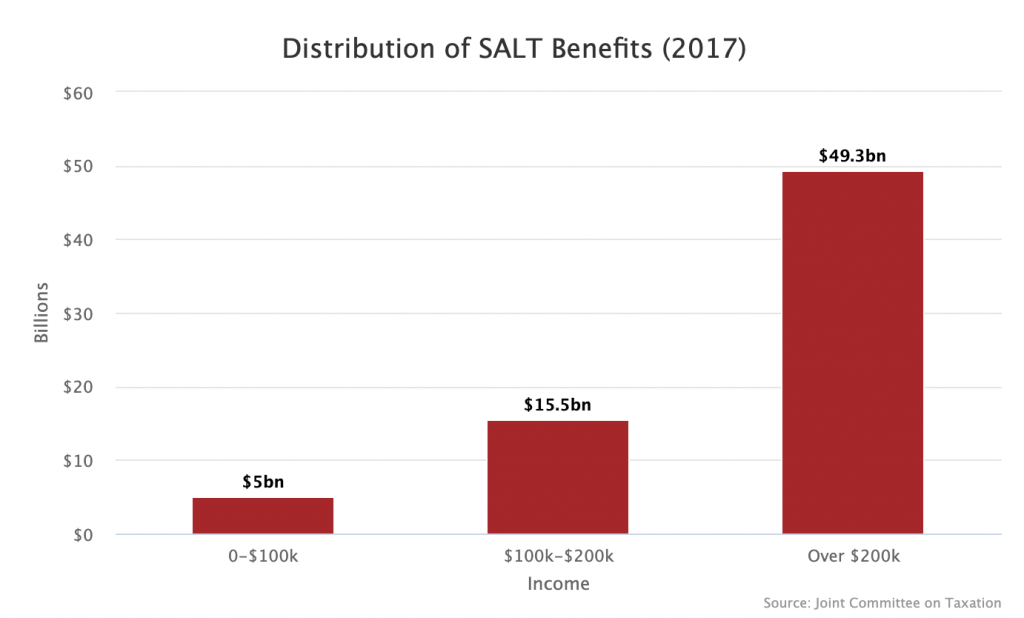 This is because, to get any benefit from SALT at all, you need to be rich enough for itemizing deductions to make sense. This is also because the value of the benefit is determined by each tax unit’s marginal tax rate and richer people have higher marginal tax rates than less rich people.

To see how weird the SALT deduction really is, imagine a hypothetical state that taxes 100 percent of the income of its residents and then provides a benefit payment to each resident equal to 95 percent of taxes they contributed. The remaining 5 percent is retained to pay for the normal set of state and local government services. This hypothetical state would be no different than a state with a 5 percent flat income tax, except that the SALT deduction would allow every person in the 100-percent-tax state to claim a taxable income of $0 for federal income tax purposes.

If you think this is all far fetched and abstract, consider that all of the schemes discussed above take the form of collecting government revenue through some channel that results in a federal income tax deduction and then giving the money right back. The “charitable contribution” strategy gives all of the money right back and the payroll-tax strategy gives some of the money back through the corresponding earnings-related benefit. It is hard to understand how those plans differ from the unsettling 100-percent-tax scheme except in their magnitude.

Although SALT is implemented as a tax deduction for mostly rich individuals, it is arguably more accurate to describe it as a transfer of funds from the federal government to state and local governments. Indeed, those who defend SALT often do so in these terms: it allows states to raise taxes higher than they might otherwise be able to because they know those they are levying the higher taxes on can partially offset them through reduced federal income taxes.