In the New York Times, David Brady, Ryan M. Finnigan, and Sabine Hübgen argue that single mothers are not responsible for America’s high poverty rates. In a corresponding paper, Brady and friends show that single parenting rates are not that much higher in the US than peer nations. What differs is how harsh the penalty for single motherhood is. In peer nations, single-mother families face somewhat higher poverty rates than two-parent families. In the US, they face massively higher poverty rates.

Of course, America’s child poverty problem is not solely the result of its “single-motherhood penalty.” The truth is that even US children in two-parent families have much higher poverty rates than children in other developed countries. For instance, in 2013, the Finland two-parent child poverty rate was 2.2%. In the US, it was 5.7x as high at 12.6%.

Only Canada has worse two-parent child poverty in the LIS data, though one suspects that has probably changed since the introduction of the new Canada Child Benefit.

Another way to put this point is to say that high US child poverty is not so much driven by the “single-motherhood penalty” as it is simply driven by the “family penalty” or the “child-having penalty.” Across peer nations, the US dedicates the lowest amount of GDP to public family benefits like paid leave, child care, child allowances, and so on. 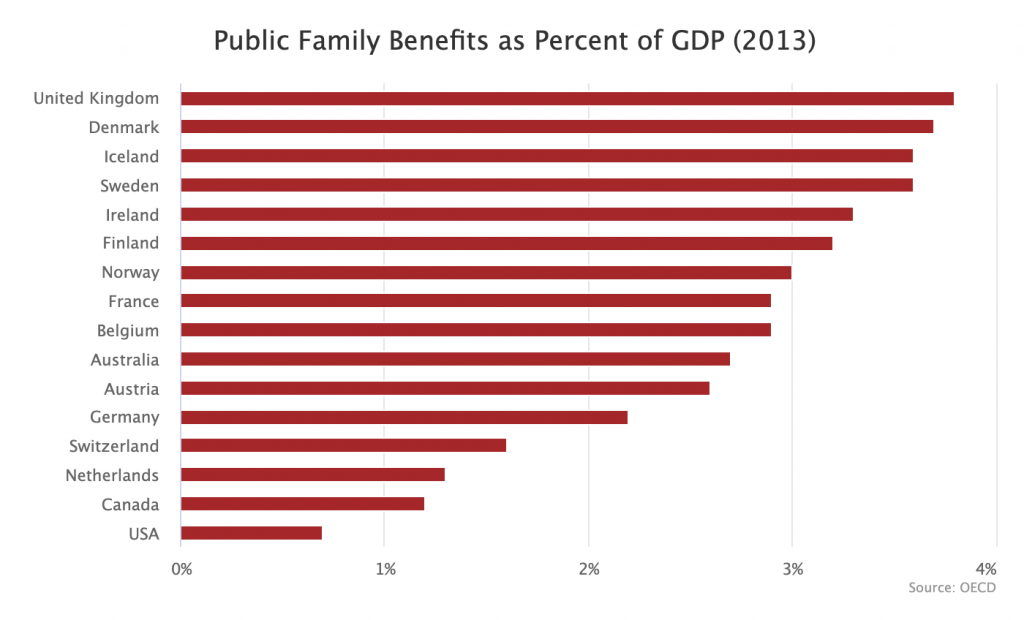 Ultimately, an economic system that distributes income only to the factors of production will neglect children since they neither work nor own. For as long as the US income distribution more closely approximates the factoral distribution of income than peer nations, it will continue to struggle with high child poverty.