The wage gap discussion in the US has long struck me as being a little strange. One side says that women make 20 percent less than men. Then the other side says that, once you control for the different labor market characteristics of men and women, the gap is much smaller. Then the first side comes back and says that the fact that men and women have different labor market characteristics is itself gendered and that this gendered sorting is still a problem.

The latter point has been the sophisticated argument about the gender wage gap for some time, an argument that seems quite persuasive to me. Unequal pay for identical work is not the only way that a labor market can be sexist. A labor market that sorts men into higher-paying jobs and women into lower-paying jobs is still sexist, just in a different way.

But what’s odd about this sophisticated argument is that its advocates all seem to be using the wrong statistics. The NWLC statistic that says women make 80 percent of what men make only compares the median earnings of full-time workers. So despite making a very persuasive case against controlling for labor market characteristics, advocates end up using one of those controls for their own headline statistic! Just as it ignores gendered sorting to control for job type, hours worked, and experience, it also ignores gendered sorting to control for full-time work.

The correct statistic for those partial to the sophisticated argument should be a completely uncontrolled comparison of the median earnings of all men and women who are in their prime working years (ages 25 to 54), including those who work less than full time and those who do not do any paid work. Unlike the NWLC statistic, this comparison reflects the gendered sorting that results in women being more likely to have part-time work and more likely to be out of the labor market altogether. 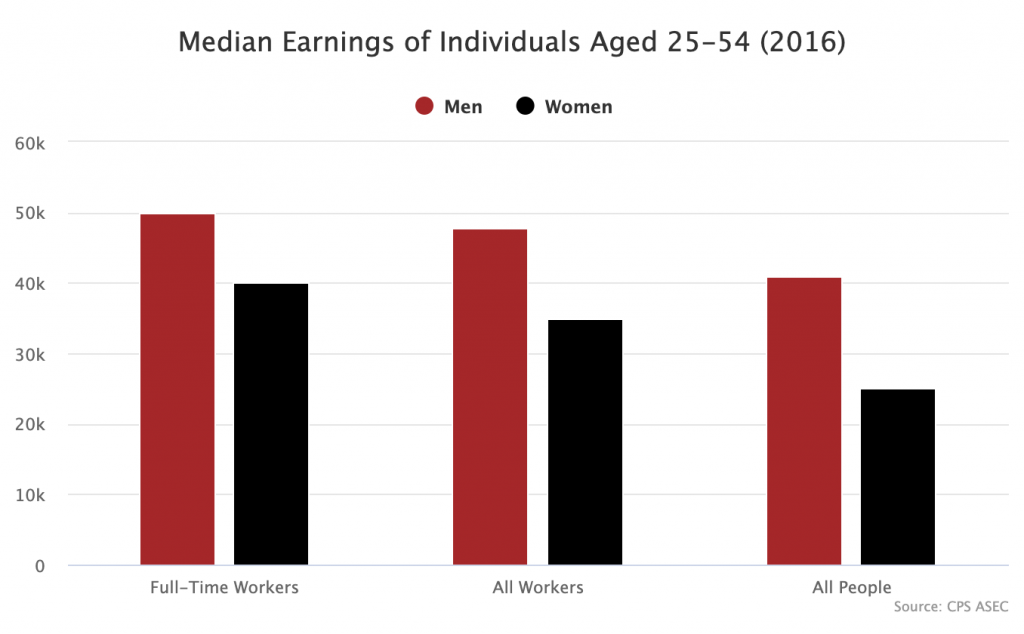 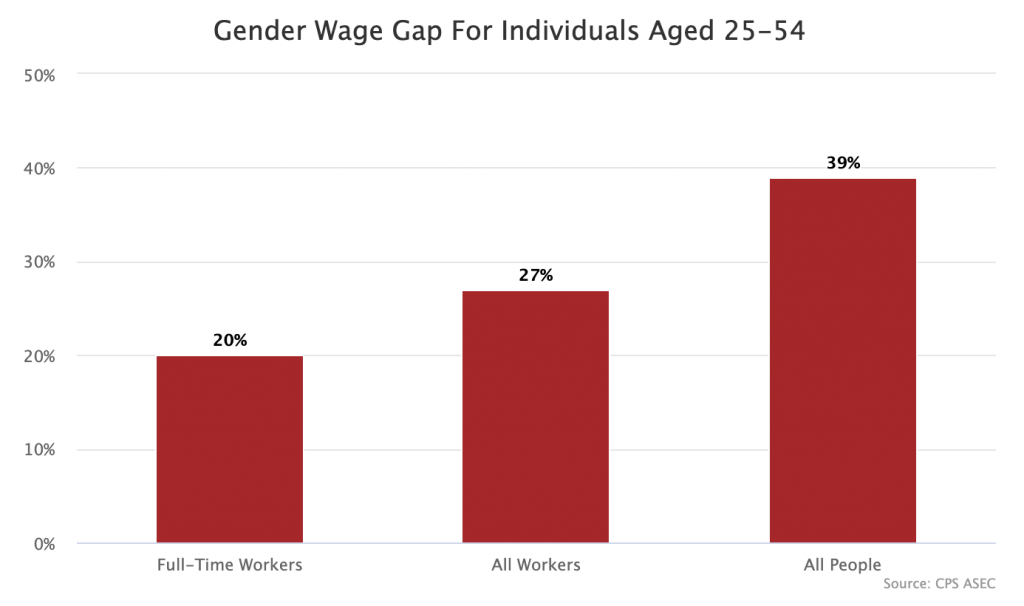 The difference between the conventional 20 percent finding and the correct 39 percent finding is, as you would expect, completely driven by gendered differences in who engages in full time work. When I compare full-time workers (those working 50+ weeks) between the ages of 25 and 54, I find the median woman earning $40,000 and the median man earning $50,000. Even though this calculation is slightly different than the NWLC wage gap, it nonetheless shows women earning 20 percent less than men. When I compare all workers (those working 1+ week) between the ages of 25 and 54, I get women earning $35,000 and men earning $47,750, meaning a wage gap of 27 percent. And then when I compare all people in that age band, including nonworkers, I get the 39 percent wage gap figure.

If you are trying to determine how much less employers pay women for the same work, then you should use a bunch of controls to ensure an apples-to-apples labor comparison. If you are trying to determine what effect gendered sorting in the labor market has on earnings, then you should use no controls as I do here. The conventional NWLC measure that says that women make 80 cents on the dollar uses one control (full-time work) while rejecting all the other controls, which places it in a weird middle zone that does not track anything of clear significance.