I have been writing a lot about the Mercatus study on Medicare-for-All. This piece is an attempt to make my points about it as clear and brief as possible for those not inclined to slog through a bunch of semi-technical writing.

The following graph provides a visual aid that can explain the entirety of the controversy this report has caused. The graph displays the study’s estimates of the total amount of health spending that will occur between the years 2022-2031 under three different scenarios: our status quo system, Bernie’s M4A plan, and Mercatus’s M4A plan. Each scenario is further broken down by federal health spending and other health spending. 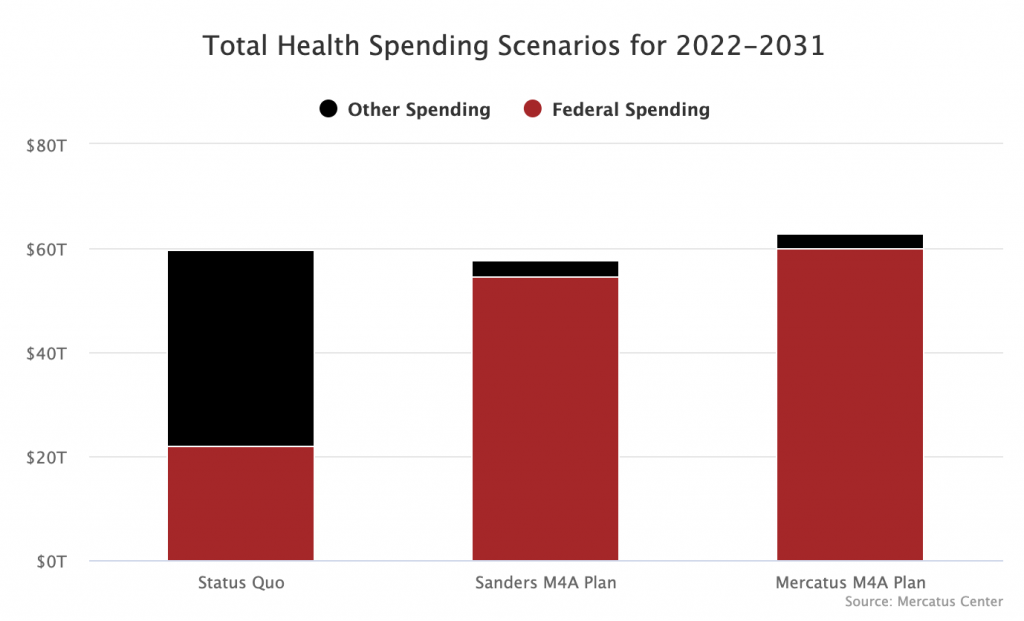 When Mercatus released their report, they had one goal in mind: draw attention to the fact that the red (federal) spending goes way up in the Sanders M4A plan. And of course it does, to the tune of $32.6 trillion.

But M4A advocates responded by drawing attention to the fact that total spending (red plus black) actually goes down in the Sanders M4A plan by $2 trillion. This has been a long-running argument for M4A: yes federal spending goes up a lot but that federal spending is merely replacing other spending (premiums, deductibles, copays) people are forced to do in our status quo system.

Mercatus got mad that this became a major emphasis of the coverage of their report. So they started a counter-campaign arguing that the third bar — Mercatus M4A plan — is the real estimate. However, this is not the real estimate. The author of the report acknowledges as much in the paper and, tellingly, this estimate appears in the appendix of the report, not its main text. What the Mercatus M4A plan really represents is a totally separate plan Mercatus came up with that has higher provider rates than the ones in Sanders M4A plan.

Which score you go with ends up mattering a lot for public messaging and for the press. And so it needs to be repeated again: the Sanders M4A plan bar is a score based on the actual text of Sanders’s bill and the Mercatus M4A plan bar is not.

With that all said, which score you go with really does not matter that much. None of these bars are that precise and even the Mercatus M4A plan is an incredible deal.

Relative to the status quo, the Sanders M4A plan insures 30 million more people, virtually eliminates out-of-pocket expenses, and provides hearing, visual, and dental coverage for everyone. The cost is the same as we already spend in the status quo minus 0.7 points of GDP.

So one very generous way of describing the Mercatus’s report is to say that: Mercatus has concluded we can insure 30 million more people, virtually eliminate out-of-pocket expenses, and provide hearing, visual, and dental coverage for everyone — all for the same price we are currently paying for healthcare plus or minus 1 point of GDP. That is a no-brainer deal if I’ve ever heard one.