Most of the discussion surrounding the Mercatus center report on Bernie Sanders’s Medicare for All plan has been about whether the score shows that Sanders’s plan can realistically save $2 trillion over the first 10 years of implementation. The answer to that question is “yes it does show that,” but Mercatus has been hard at work spinning gullible media platforms to say otherwise.

But as important as it is to get that fact right, it’s also important to make two other points that people often get wrong about Medicare for All and this study.

First, even Mercatus’s modified version (black line) of Bernie’s plan (red line) where Mercatus assumes zero provider payment cuts is really not that much more expensive than the status quo. Under the status quo, Americans as a whole will spend 21.1 percent of GDP on health care between 2022 and 2031, while under the Mercatus version of Medicare for All, it’s 22.2 percent — and for that extra 1.1 points of GDP, you get 30 million more insured, the virtual elimination of out of pocket expenses, and universal dental, hearing, and vision coverage. 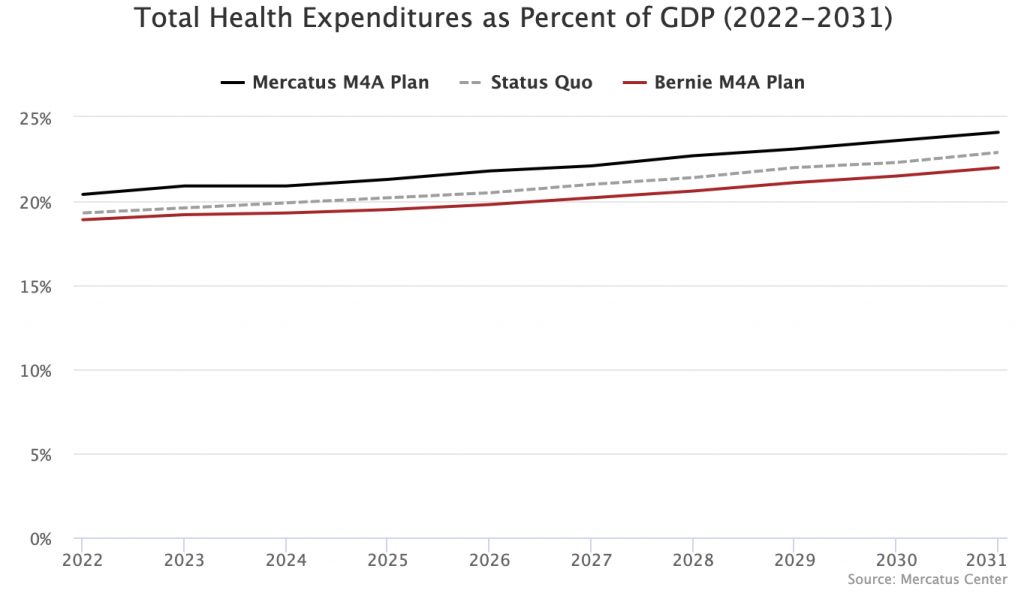 The naive way to think about how much fiscal room the government has is to just look at the tax level. The US tax level is currently 26 percent of GDP while Denmark’s is 46 percent of GDP. So, under the naive take, the difference between those two numbers, 20 points of GDP, is basically the total conceivable budget for new government taxes. If you spend 10 of those 20 points on Medicare for All taxes, then you only have 10 more points left. But if you spend only 2 points on a complicated scheme of refundable tax credits, then you have 18 points left. Or so the reasoning goes.

What this means, then, is that the cheapest route to universal healthcare (in terms of national health expenditures) is always going to leave more fiscal space for spending on other public benefits than any other route, regardless of whether the cheapest route involves a bunch of government spending or very little. The centrists do not yet have a plan for how they are going to get to universal healthcare without Medicare for All. But you can be sure that, if such a plan relies upon the existence of a bunch of private insurers, then it will cost more than even the Mercatus version of Medicare for All (black line) above. And in that case, their unnecessarily expensive approach to healthcare will crowd out other social spending to a greater degree than Medicare for All will.