GOP staffers wrote a piece for the USA Today about Medicare for All that was published under Donald Trump’s name. As you might expect, the piece is full of errors and misrepresentations. They are addressed below.

Dishonestly called “Medicare for All,” the Democratic proposal would establish a government-run, single-payer health care system that eliminates all private and employer-based health care plans and would cost an astonishing $32.6 trillion during its first 10 years.

The $32.6 trillion figure is based on a misleading representation of a Mercatus study report put out in July. According to that report, our current health care system will cost Americans a grand total of $59.653 trillion between 2022 and 2031. Medicare for All, which covers 30 million more Americans, virtually eliminates out-of-pocket expenses, and includes dental, hearing and vision, would only cost Americans a grand total of $57.599 trillion, or $2 trillion less than our current system.

Since Medicare for All shifts almost all of the spending onto the federal government’s budget, that budget number goes up by $32.6 trillion over the same period. But this is irrelevant since it is more than offset by spending reductions elsewhere, as seen in the graph below based on the Mercatus report. 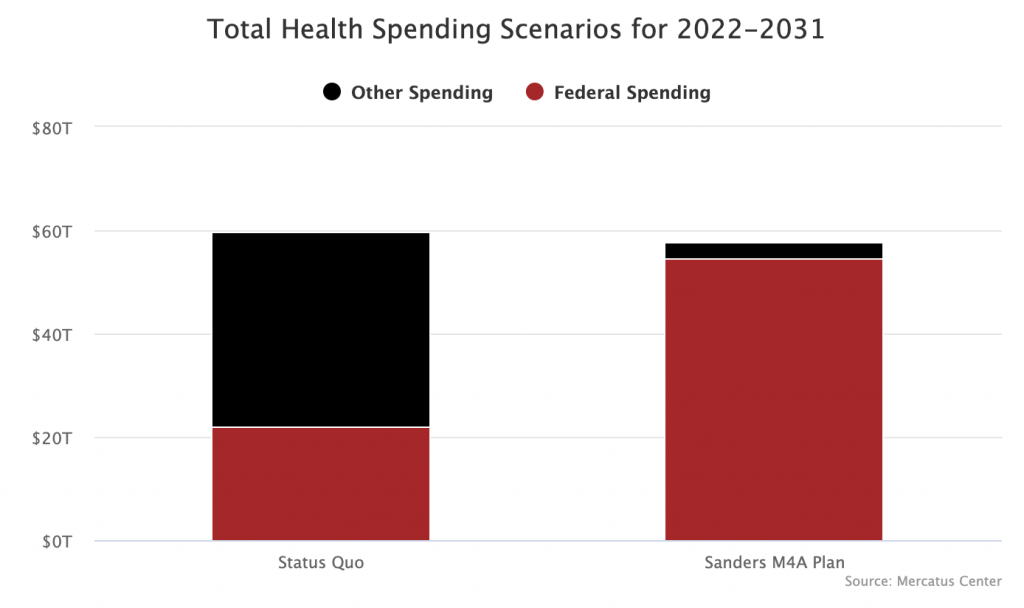 As a candidate, I promised that we would protect coverage for patients with pre-existing conditions and create new health care insurance options that would lower premiums. I have kept that promise, and we are now seeing health insurance premiums coming down.

Trump has not kept this promise. Instead, what he has done is relax regulations on short-term health insurance plans, which do not cover pre-existing conditions. Those plans used to be limited to 3 months, but now are able to last for 364 days, making them essentially one-to-one competition with exchange plans that are required by law to cover pre-existing conditions.

The first thing the Democratic plan will do to end choice for seniors is eliminate Medicare Advantage plans for about 20 million seniors as well as eliminate other private health plans that seniors currently use to supplement their Medicare coverage.

Seniors currently have to pay extra money each month for supplementary health insurance coverage since Medicare’s core coverage is not comprehensive and requires considerable cost-sharing. Medicare for All gives them all the things Medicare Advantage and supplemental plans provide but without charging seniors any money. This is a huge benefit for seniors who would have the same health insurance coverage and more money in their pockets.

In fact, under current Medicare for All proposals, seniors are probably going to benefit more than any other group, after the uninsured. This is because they get the universal comprehensive coverage of Medicare for All but without facing any extra taxes to pay for it. Those who are currently privately insured will get relief from having to pay huge sums of money to private insurers but will also end up paying a big chunk of those savings to the government in the form of higher taxes. Since seniors generally do not work, they would not be affected by the payroll taxes in the plans, and since Social Security income is largely exempt from federal income taxation, they would also mostly be unaffected by the income taxes in the plans.

Indeed, the Democrats’ commitment to government-run health care is all the more menacing to our seniors and our economy when paired with some Democrats’ absolute commitment to end enforcement of our immigration laws by abolishing Immigration and Customs Enforcement. That means millions more would cross our borders illegally and take advantage of health care paid for by American taxpayers.

Putting aside the rhetoric, the point here is that immigration will make it harder to finance Medicare for All by creating new customers for the system. But this has things exactly backwards. Immigrants are generally net payers into the government and allowing doctors to immigrate to the US, for instance from India, would both increase net payments to the government (because those doctors pay more tax than they receive in benefits) and increase the capacity of the medical system by increasing the number of providers.