The Washington Post’s Glenn Kessler decided again this week to fact-check claims made about health care policy. As with his prior attempts in this policy area, Kessler’s newest piece features his signature sloppiness, multiple corrections of his own errors, and is generally mistaken. 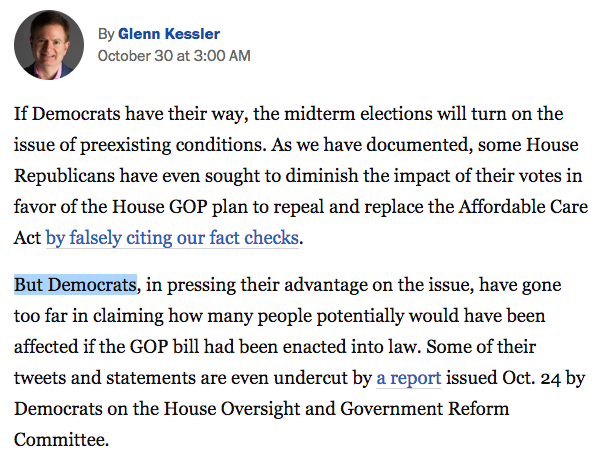 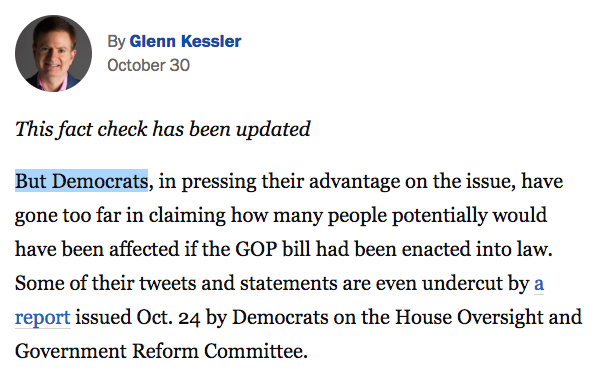 That’s right. After publication, Glenn deleted the entire first paragraph of his piece and now amusingly begins his post with the conjunction “but.” Making sure his new lede makes grammatical sense is too much for the nation’s factual umpire.

This is just the funniest example of Glenn’s sloppiness in this piece. If you read the entire corrected version of his fact-check, you’ll notice that Glenn has moved so much stuff around and inserted and rewritten so many paragraphs that the piece is nearly inscrutable.

As best as I can piece it together, the core issue addressed by the piece is this: many Republican politicians who are running for office right now have made efforts to undermine legal protections for people with pre-existing health conditions by doing things like 1) voting to enact the AHCA, 2) voting to repeal the ACA, and 3) supporting lawsuits that would repeal the ACA.

Kessler awards 2 or 4 Pinocchios to claims like this depending on the past behavior of the Republican politician who is being accused. Specifically, the Pinocchio logic tree appears to go like this:

Kessler’s Pinocchio-mongering makes no sense on either point.

Kessler does not raise methodological objections to CAP’s estimates or give any reason to believe that they are incorrect. He only notes that other organizations throughout the years have produced somewhat different estimates, which is of course to be expected given the difficult nature of estimating such a thing. So what exactly is deceptive about citing CAP’s estimates rather than the estimates of other organizations? Do candidates’ speeches have to cite every single estimate of the number of people with pre-existing conditions that has ever been produced? Apparently so or else be called a liar by Kessler.

When it comes to AHCA only stripping protections in the individual health insurance market, Kessler is just conceptually confused about how to understand the impact of that. Kessler reasons that, because only a small percent of each state’s population receives insurance through the individual exchanges, it is wrong to use estimates of the total number of people with pre-existing conditions in the state when describing how many people AHCA’s provisions put at risk.

The problem with this analysis is that it ignores the fact that insurance situations change all the time. Indeed, that is one of the most hellish parts of the US system. You may be in employer-provided insurance today, but if you get laid off or switch jobs, you could very easily find yourself in the individual insurance market tomorrow. And if you have a pre-existing condition, stripping out protections in the individual market quite clearly does put you at risk of not being able to get coverage regardless of whether you rely on that market today.

So to recap: according to Kessler, it is a lie to reference one credible estimate rather than all such estimates simultaneously; and it is a lie to say that all people with pre-existing conditions are put at risk when one of the insurance channels, which anyone could end up relying on at some point in their life, is permitted to discriminate against them. These are not only lies, according to Kessler, but full-blown 4 out of 4 Pinocchio lies! Once again, it is hard to avoid the conclusion that Kessler does not know what he is talking about.