At the suggestion of Slate’s Jordan Weissman, I set out to produce some figures that illustrate the poverty-reducing effect of various child allowance benefit amounts. A child allowance is a program that provides a flat cash benefit amount to every child, e.g. $300 per month per child. In this sense, it is like the child version of an old-age or disability pension. The figures show that even a relatively modest child allowance would substantially reduce poverty. They also show that, at the margin, the child allowance is more effective at poverty reduction than other basic income programs.

For this exercise, I used the Annual Social and Economic Supplement (ASEC) and the Supplemental Poverty Measure (SPM), both produced by the Census Bureau. I take the income concept of the SPM, which includes cash income and cash-like in-kind benefits like SNAP and WIC, and then subtract out the Child Tax Credit (CTC) and the Additional Child Tax Credit (ACTC). From there, I add in various child allowance and basic income amounts to produce the statistics below. The idea here is to calculate what things would look like if we replaced the CTC and ACTC with a child allowance.

In the status quo, there are 44.9 million people living below the poverty line according to the SPM measure. Eliminating the CTC and ACTC brings that number up to 47.7 million (13.1 million children and 34.6 million adults). Starting from that baseline we can see what happens when we introduce a child allowance of varying benefit levels. 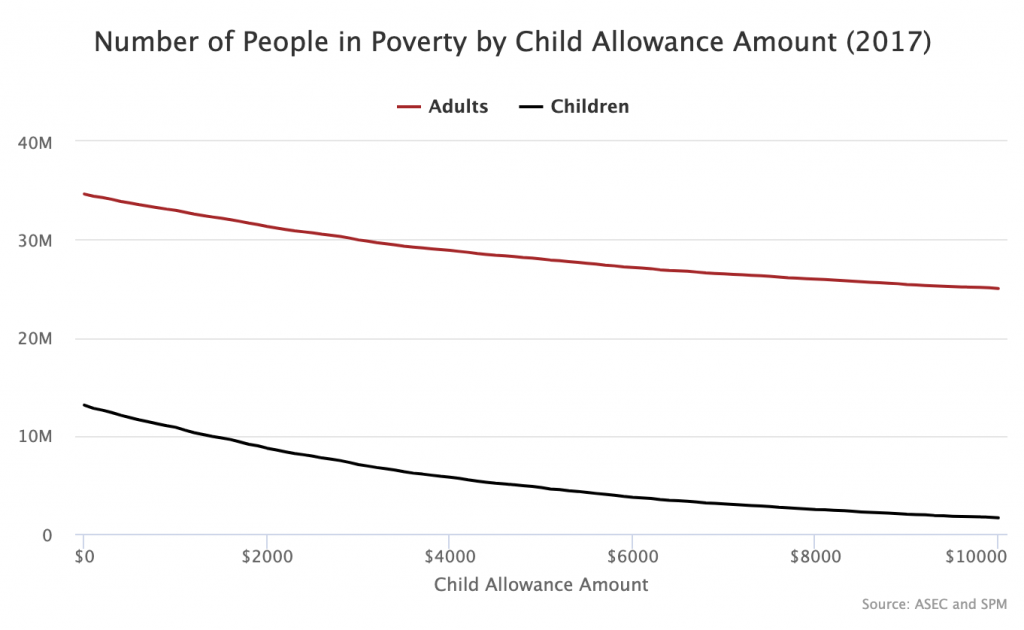 A child allowance of $3,400 per year would cut child poverty in half relative to the baseline while also pulling 5.2 million adults out of poverty. Funding such a program would only require 1.2 percent of GDP. 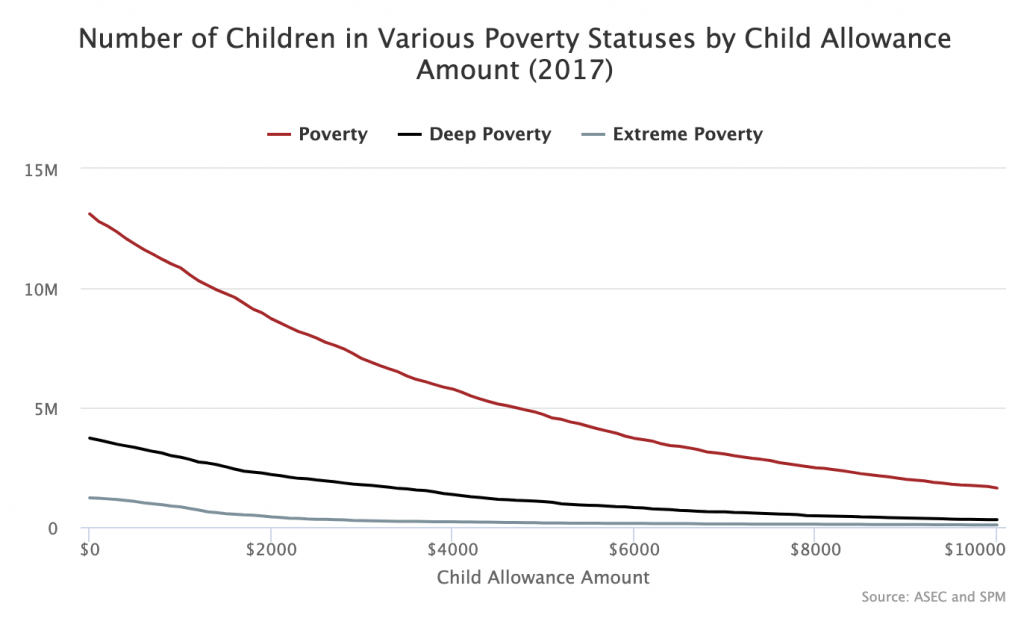 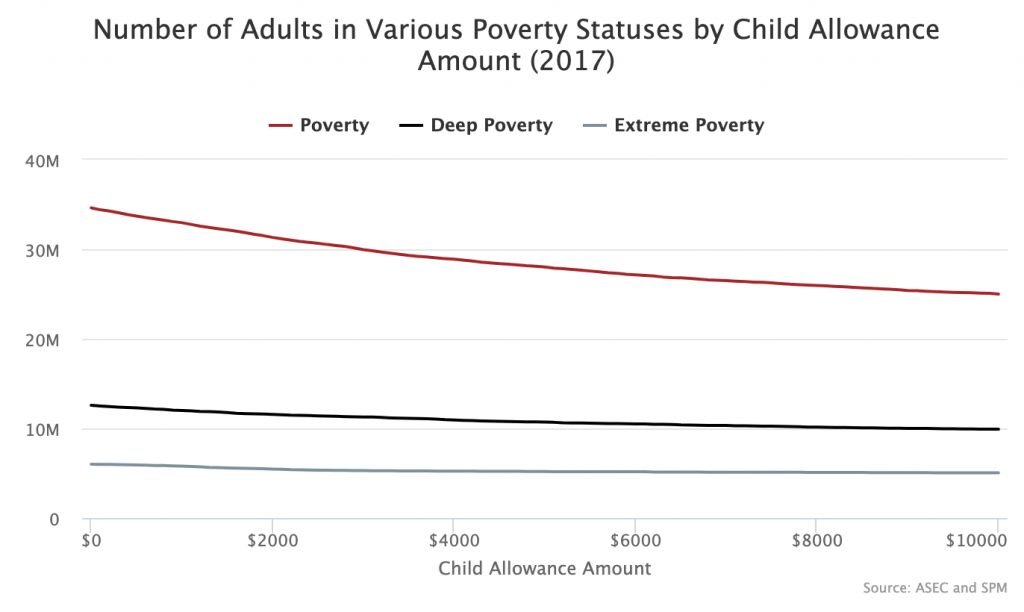 For children especially, even a modest child allowance dramatically reduces deep poverty and virtually wipes out extreme poverty. The reason those numbers don’t go completely to zero is because some families have negatives incomes, e.g. if they run a family business that loses a ton of money.

A child allowance program is a type of basic income insofar as it is a flat universal cash payment made to a group of people. That raises the question of how it stacks up against other kinds of basic incomes. In the below graph, I show how much a given amount of money would reduce poverty if it was divided equally between all people, all adults, or all children (child allowance). 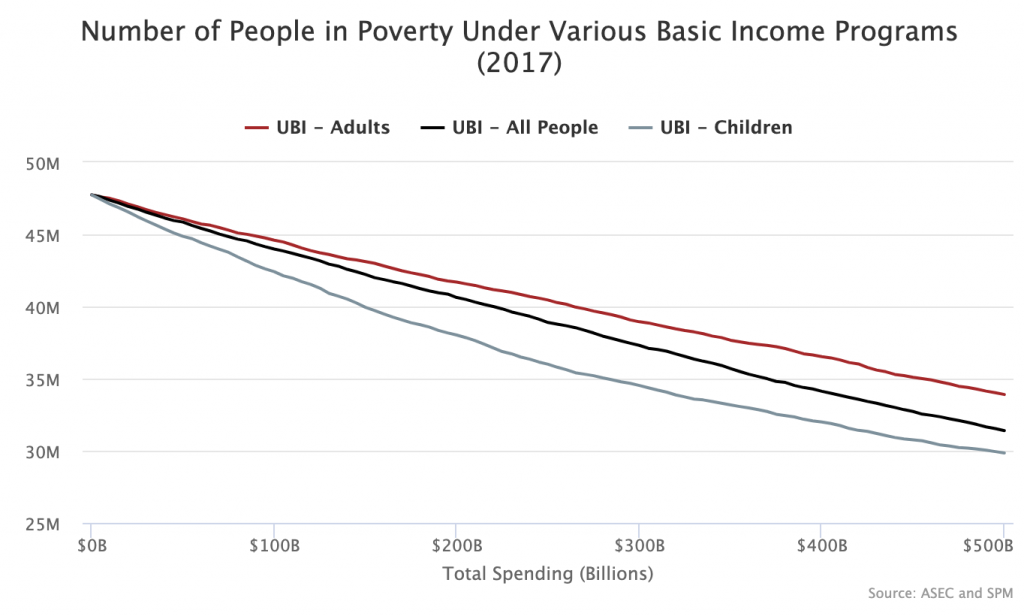 It turns out that the child allowance is quite a bit more effective than the other UBI approaches on a per-dollar basis. Putting $250 billion (around 1.2 percent of GDP in 2017) towards a child allowance program rather than an adults-only basic income pulls 4.5 million more people out of poverty.

What all this shows is something poverty researchers have known for a long time: children are a major driver of poverty in American society. They drive poverty not just for themselves, but also for millions of adults who wind up in poverty solely because of the financial strain of raising children. Only the welfare state can solve this problem.