Free cash flow is a useful measure of how much money a company generates for its shareholders in a given year. In 2017, US companies generated far more cash from operations than they spent on capital investments, allowing them to return the extra cash to people who own shares of the companies. Among non-financial companies in the S&P 500, the median free cash flow for 2017 was $816 million. In the same one year period, operations of the top ten non-financial companies, by free cash flow, generated $221 billion in cash for shareholders, after these companies had finished investing in plants, property, and equipment.

In determining how much cash can be returned to the owners of a company’s stock in a given year, free cash flow offers insight that other measures, like net income (the typical earnings reported by a company) cannot. Net income is easier for companies to game (for tax purposes, for example) because net income allows companies to spread out expenditures on capital investments over a multi-year period. Free cash flow is harder to fake, as it is simply the cash generated through operations in a given year minus the expenditures on capital — plants, property, and equipment — made in the same year. 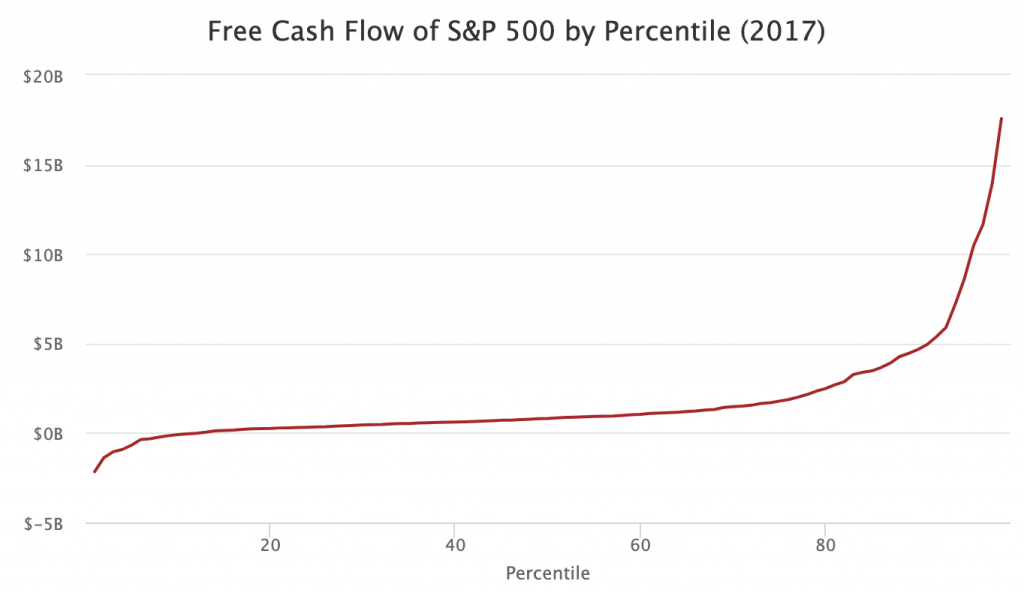 The distribution shown above also points out that much of the total comes from a small subset of companies. Apple, Microsoft, and Google hold the top three spots for free cash flow. Apple generated $51.8 billion in leftover cash in 2017, compared to $31.4 billion and 23.9 billion for Microsoft and Google, respectively. Facebook was sixth, generating $17.5 billion in unused cash. All of these companies, notably, benefit strongly from government protection of their intellectual property, often at the expense of consumers.

At a large scale level this is fairly obvious — Google can’t make an iPhone — but selling counterfeit iPhone chargers on the street, for example, is prosecuted aggressively and often results in felony charges. The result of protectionist IP policies is a windfall for the owners of IP–often more cash than they know what to do with.

And while some companies proclaim to be perpetually operating as start-ups, spending heavily each year in the capital that supports future growth, the distribution above suggests that most large companies are simply not able to find productive uses for all of the cash generated by operations. This suggests that bringing this cash flow into public coffers — whether through taxes or direct public ownership of corporate equity — could result in the money being put towards better uses. Those uses could include investments in our crumbling public infrastructure or even a per-capita dividend paid to every American not just the current shareholders of US corporations.

If 25 percent of the free cash flow of the non-financial portion of the S&P 500, totaling $207 billion in 2017 from 430 companies, was divided equally among 325 million people in the US, the dividend payment to each person would be $637 in 2017 and $575 in 2016. This is real money, particularly for those at the bottom of the income distribution, who currently own no shares of companies or their IP. Because the current ownership of stocks is very disproportionately clustered among the wealthiest people, nearly all of companies’ excess cash ends up flowing to the top. It doesn’t have to be this way.