Alexandria Ocasio-Cortez recently suggested raising the top tax rate to 70 percent in order to raise money to fund climate change investments. Conservatives were dismayed by the proposal while liberals and leftists generally defended the proposal by pointing to the fact that top tax rates in the US were once 91 percent and by pointing to tax scholarship that says rates that high (or even higher) are optimal.

One thing missing from the discussion so far is the point that a 70 percent top tax rate exists, not merely in midcentury US tax codes or in academic papers, but also in the real world right now. Sweden has a 70 percent marginal tax rate and it kicks in, not at $10 million like AOC proposes, but at around $98,000. AOC’s proposal is quite modest by comparison.

According to the OECD, single Swedish workers making over 867,000 SEK (around $98,000 at prevailing exchange rates) face a 70 percent overall marginal tax rate on all labor compensation earned above that threshold. The below graph decomposes this overall marginal rate into its three parts and shows how much is left for take home pay: 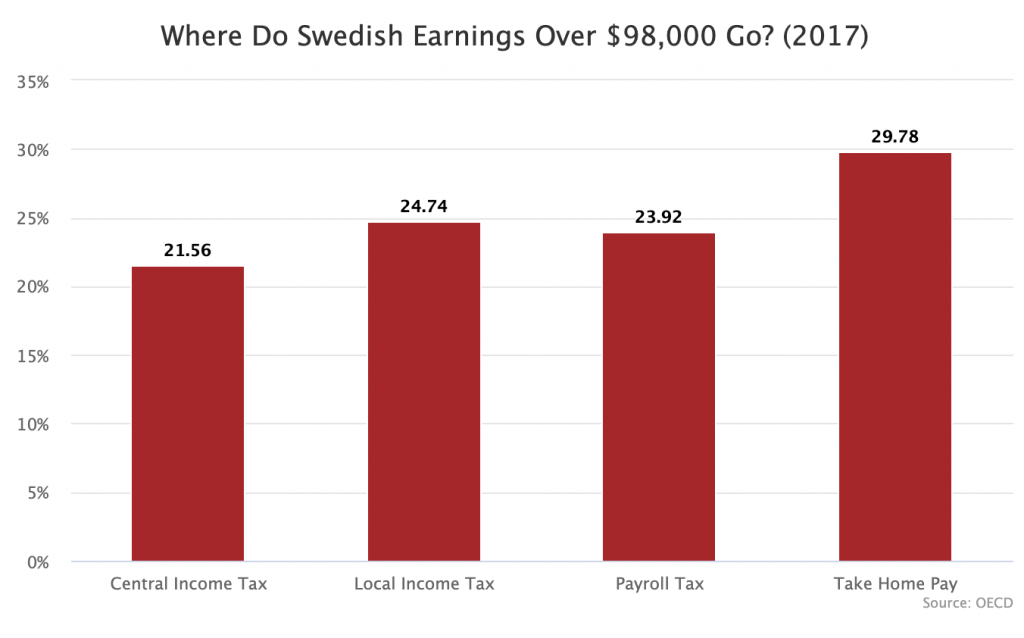 Most American pundits don’t look abroad when talking about these sorts of issues. Those who do look abroad often look at the wrong figures. The proper way to measure labor taxes is through something called the marginal tax wedge. The formula for this is:

Those doing cross-country comparisons often fail to properly account for the employer-side payroll tax and thereby hugely understate the tax rates of countries like Sweden, which rely heavily on those kinds of taxes. But despite their name, these taxes are ultimately paid by workers and therefore come in just like personal income taxes do when measuring how much a unit of labor is being taxed.

What a 70 percent tax rate would look like is thus much less hypothetical than people imagine it to be. Sweden is not perfect but it’s a successful high-income country where ordinary people have a higher standard of living than their US peers.