According to the Mercatus Center, Americans are set to spend $59.7 trillion on health care between 2022 and 2031 under our status quo healthcare system. Because of its enormous efficiencies, switching to a Medicare for All system would cut that figure down to $57.6 trillion even while covering 30 million more Americans, eliminating cost-sharing, and providing hearing, dental, and vision. 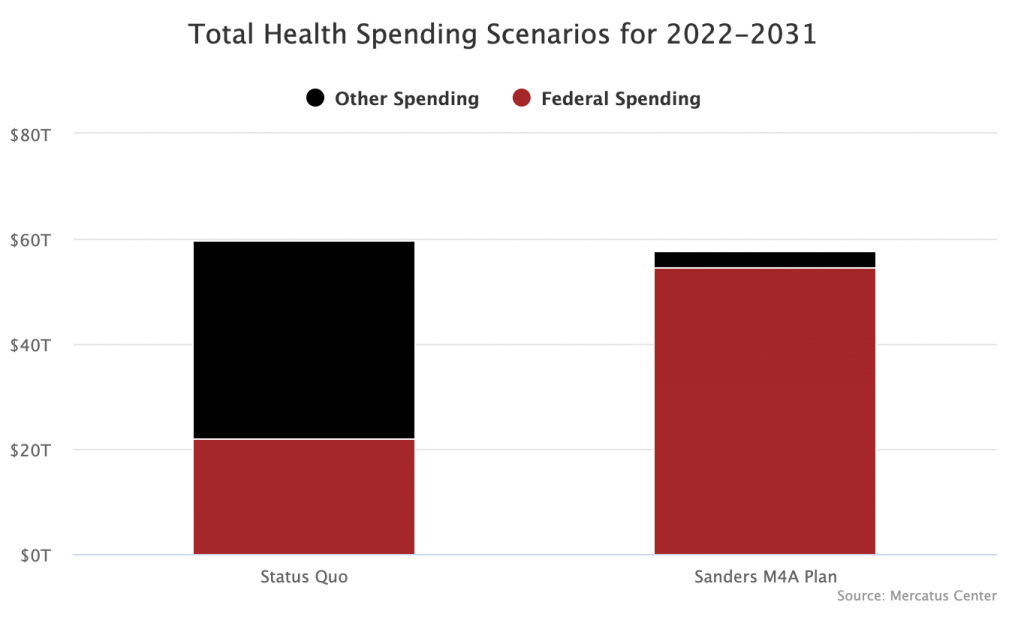 These cost estimates may be too high. The Political Economy Research Institute (PERI) also ran the numbers on Medicare for All and found the savings realized by switching to such a system to be significantly greater than what Mercatus reported. Nonetheless, in both the PERI and Mercatus studies, it remains clear that for a national health insurance system to work, a bunch of money needs to be rerouted through the federal government.

This then raises the question: how should we change our tax system in order to fund the new Medicare program? Naturally people disagree on this question and there are a number of reasonable paths one could take. Here I lay out one such path that focuses primarily on reforming payroll taxes.

Payroll taxes are assessed as a percentage of gross wages. Although all payroll taxes are ultimately paid for by workers in an economic sense, they are nonetheless charged in the tax code to either employers or employees. 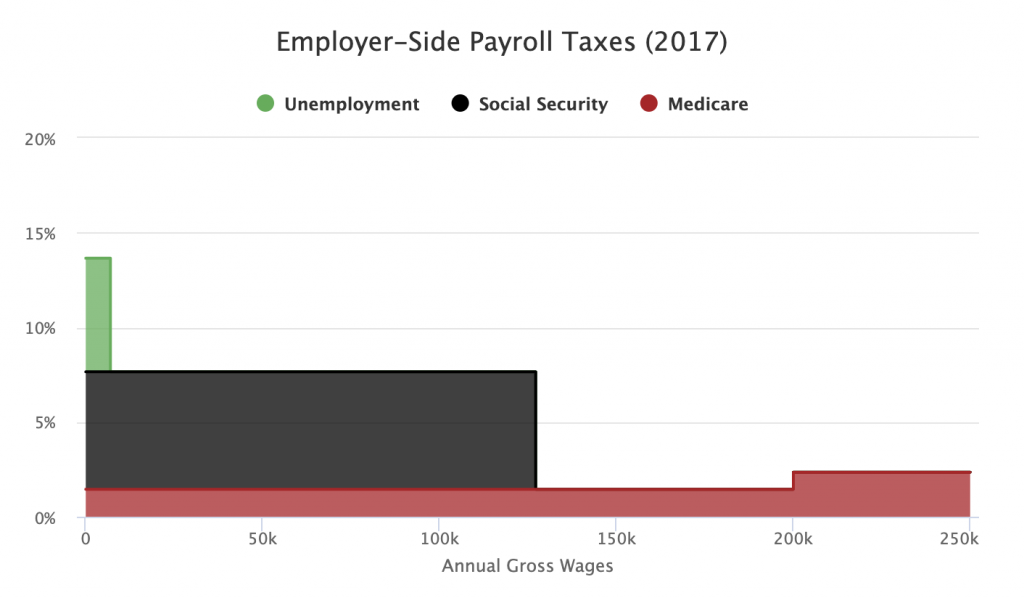 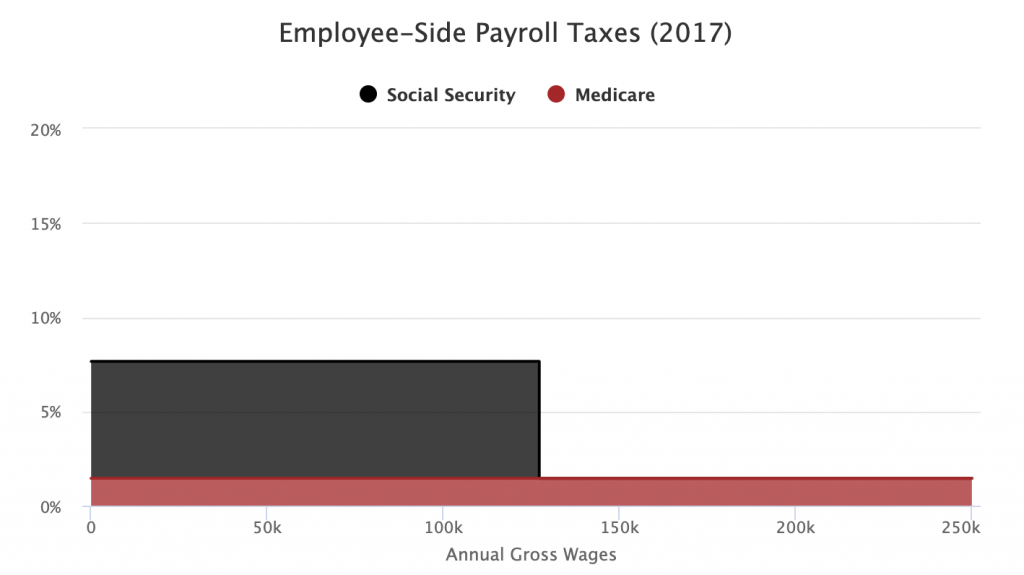 Overall, the payroll taxes have a “regressive” shape insofar as they start out at a high rate — a combined 21.3 percent for the first dollar of earnings — and then decline at higher earnings levels.

When we transition to Medicare for All, we should convert all of the payroll taxes to flat taxes. This will ensure that the middle class winds up, as promised, with better health care at a lower price, and provide a cushion for low-earners on Medicaid so that they do not see a cut back in disposable income.

One of the main distributive criticisms people make against Medicare for All is that many low-earners already receive free government health insurance in the form of Medicaid and so moving them onto Medicare while also making them pay higher taxes will leave them worse off overall.

As a general matter, I’ve found this criticism a bit under-theorized. Medicaid receipt is based on one’s tax unit, not family or household unit, and so you actually see it up and down the family/household income ladder (though obviously disproportionately at the bottom). Additionally, Medicaid recipients are not a static group and will generally find themselves shifted onto crappy individual or employer health insurance at a later point. Lastly, Medicare for All as proposed does actually give them better insurance than Medicaid.

The new employer-side payroll taxes would be assessed like this: 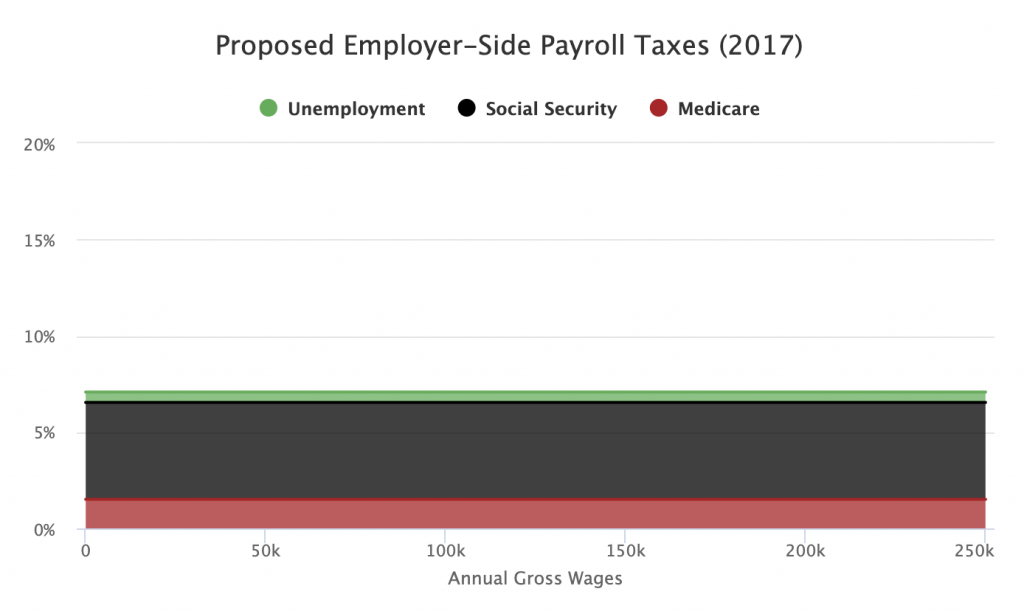 All together, employers would pay a flat 7.08 percent tax on top of every dollar they pay in wages. As I noted already, this particular change would not cost employers any more than they currently pay overall. It would just shift the distribution of these taxes up the earnings ladder. Relative to the status quo, payroll taxes would go down a bit for dollars earned below $127,200 and go down a bunch for dollars earned below $7,000. Dollars earned above $127,200 would be taxed more heavily.

The new employee-side payroll taxes would be assessed like this: 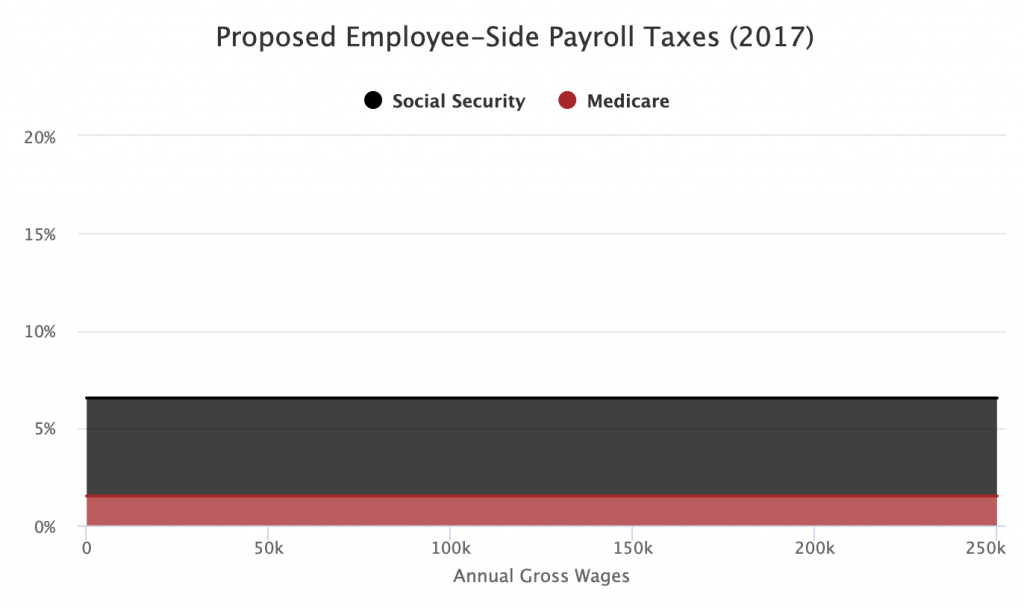 Jack Up the Employer-Side Medicare Tax

After you’ve committed to transforming the payroll system from a regressive tax to a flat tax, you’ll want to increase the employer-side Medicare tax to capture the money that employers are already paying into private insurance premiums. Using the NIPA and CMS data, I estimate that employer contributions to private insurance premiums are currently equal to 9.06 percent of wages and salaries. To reroute that into the national health insurance system, you’ll want to bump the employer-side Medicare tax up from 1.51 percent to 10.57 percent.

This would mean the employer-side payroll taxes would look like this: 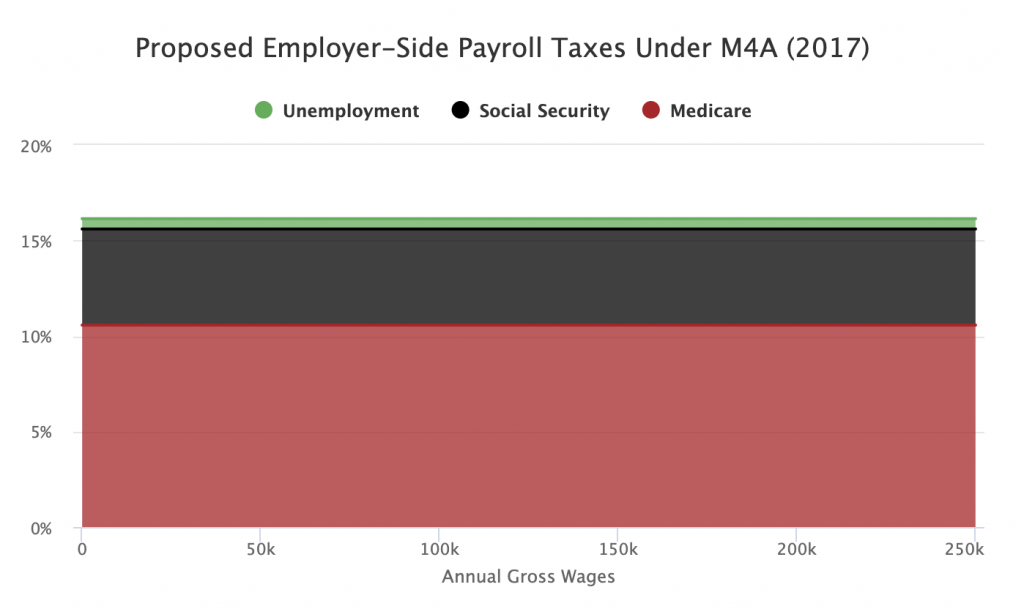 Under this scenario, the total employer-side payroll tax goes to 16.14 percent. And remember, this is just from redirecting employer contributions to private insurance into the Medicare tax. This change would not on average increase employer benefit costs.

To this point, critics will say that the 9.06 percent is just an average and some employers pay less than that while others pay more. But here is once again where the conversion of all payroll taxes to flat taxes helps to grease the wheels. Employers who pay less than that amount because they don’t provide insurance at all are generally low-wage employers, meaning they get the most relief from the flatter payroll tax scheme. Employer-side taxes on the first $7,000 of earnings only go up from 13.65 percent to 16.14 percent, or 2.49 points, on net. This is less than one year of regular nominal employment cost growth.

The other kind of employers who generally pay less than 9.06 percent of wages and salaries towards health insurance are high-wage employers. Because health insurance is currently charged at a fixed price (essentially a head tax), if you divide that price by the wages received by high-earners, it’s going to be below 9.06 percent. But the fact that rich workers and their employers have to suck it up and contribute more into the new system than they did the old system is a good thing and precisely what we are trying to achieve.

Although redirecting current employer premium payments into the national health insurer via a hike in the employer-side Medicare tax is a good start, it will of course fall short of the amount of money we need to raise. There is still the money households currently pay into the system via their premiums and out-of-pocket expenses and that amount also needs to find its way into the national health insurer bucket going forward. So what else can we do?

On this question, I have less of an opinion. It makes sense of course to bump up the federal income tax a bit to replicate household premiums. Bernie Sanders also has a laundry list of targeted taxes on the super-rich and levies on capital income. Those too sound good.

Another path though might be to just stick with the employer-side Medicare tax. You can start with a 9.06 percent (or similar) hike in that tax and then grow that tax year over year until it brings in the necessary amount of revenue. So long as you grow the tax each year by less than nominal compensation growth, employers can just pass it through to workers in the form of lower raises. In order to bridge the gap from year one of the program until the employer-side Medicare tax reaches its necessary level, you can just have the government borrow money. Using a one-off increase in the national debt to facilitate a transition into Medicare for All is as good a use of Treasury bonds as any other.

In closing, it is worth noting, as always, that this is not some kind of wacky idea, but instead one that has precedent elsewhere in the world. Swedish employers currently pay a flat employer-side payroll tax of 31.42 percent. If they can do that, then we can for sure do this.