The Washington Post’s Jeff Stein had a piece last week about the need for middle class tax hikes to pay for a robust social democratic agenda. I am quoted in it saying that the US could raise the tax level by $50 trillion over the next ten years by adopting Nordic style taxes, which is more than enough to cover the progressive agenda.

This response reminds me of a point I have been meaning to make for a while, which is that there is a trilemma at the heart of a certain kind of tax-shy egalitarianism that people don’t seem to recognize. The trilemma is that you cannot simultaneously believe the following three things:

Put simply: you can’t tax the rich to fund the welfare state if the rich are no longer rich.

There is a bucket of money out there that we can call “market income over $200,000” and the so-called predistributive agenda is to shrink the size of that bucket dramatically through unionization, codetermination, antitrust, reforms to intellectual property law, and so on. But if that bucket shrinks dramatically, then it cannot be drawn upon to fund the welfare state. 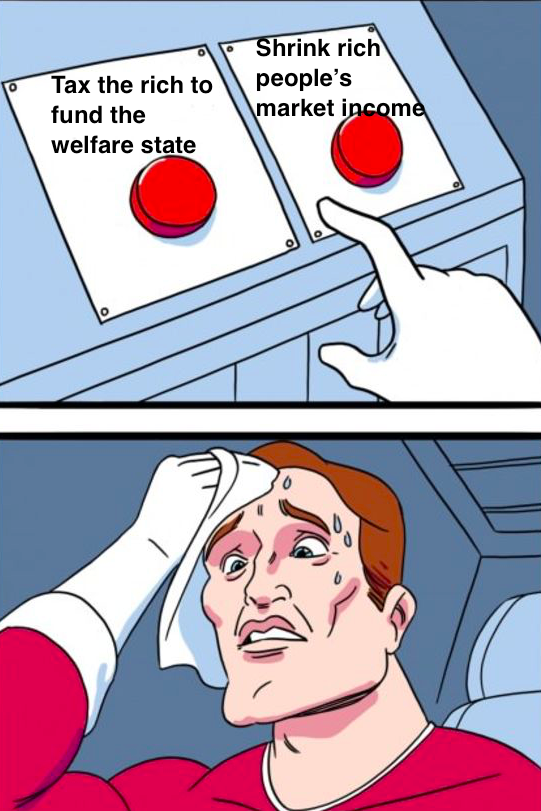 The only way out of this trilemma is to bite the bullet on one of the prongs.

You can say, as Dean Baker and Mark Schmitt have, that we should drop prong (1) on the theory that, if we achieve “predistribution” (i.e. increase the share of market income flowing to low earners and middle earners), then we don’t need a much bigger welfare state. This is a big mistake though as the welfare state exists primarily to get money to nonearners like children, elderly people, disabled people, students, caregivers, and the unemployed, not to get money to low earners and middle earners per se.

You can say that we should drop prong (2) and accept that we will need higher middle class taxes, especially if we substantially compress the distribution of market income. This is my approach to the trilemma.

Lastly, you can say that we should drop prong (3) and that we should not reduce the market income share of the rich. I do not know of anyone who advocates this, but it would be a funny troll position to take. Basically, the argument would be that middle class tax hikes are a political non-starter, but people love taxing the rich. Thus, we should try to increase rich people’s share of market income as much as possible so that we have the largest possible tax base for the welfare state.

To me, what the trilemma teaches us is that we should not in principle be opposed to raising taxes on whoever we need to. The welfare state is an absolute must and its existence should not depend on which tax units wind up with the lion’s share of the market income.