The New York Times had coverage of a JAMA article about hospital provider payments under Medicare for All. The headline is that Medicare for All would cost hospitals billions of dollars. But this headline and the story under it are misleading insofar as they do not discuss the offsetting savings that hospitals would achieve from a lower administrative burden.

The JAMA article, written by Schulman and Milstein, starts by pointing out that Medicare reimbursement rates were initially set at hospital costs in 2000. Since then hospitals have intentionally escalated their costs through high levels of capital expenditures that they could dump on the privately-insured. 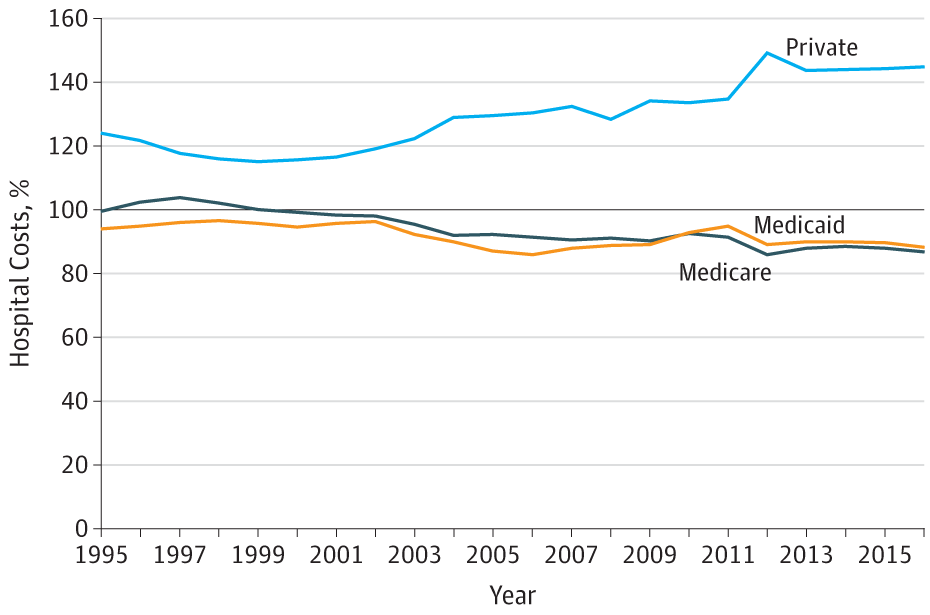 As a result of this development, Medicare provider payment rates are now about 13 percent lower than hospital costs. Shifting all payments to the Medicare provider rates would cut hospital revenue by about 16 percent, according to the authors.

To understand whether this cut would be problematic, it is necessary to look at how much hospitals will be able to save from the streamlined administration of a Medicare for All system. According to a study published in 2014, which was covered subsequently in the New York Times, around 25 percent of hospital revenue is spent on hospital administration. By comparison, hospitals operating in the Canadian single-payer system spend only 12 percent of their revenue on administration.

What this means is that the administrative efficiencies available under a Medicare for All system allow hospitals to offset 13 points of the 16-point revenue cut without digging into the actual cost of care. The remaining 3 points could come out of hospital profit margin (bringing the margin from 7 percent to 4 percent) or, as Dean Baker notes, from lowering the prices of hospital inputs, including the extremely high prices they currently pay for drugs and medical equipment.

The authors of the JAMA article point out that “most hospitals would have access to the financial reserves that they have built up over the last decades” to cushion themselves as they transitioned to the more efficient care model envisioned by Medicare for All. But if policymakers are worried that hospitals might close rather than transition, they could neutralize this problem by authorizing the federal government to keep closing hospitals open by buying them and operating them publicly.