Due to some combination of stupidity or malice (probably latter), Christopher Talgo at the Heartland Institute is claiming that Charles Blahous of the Mercatus Center has dramatically increased his estimate the cost of a Medicare for All health care system.

Talgo’s headline and subhead make it sound like Blahous released a “new” report estimating that the program would instead cost $60 trillion. 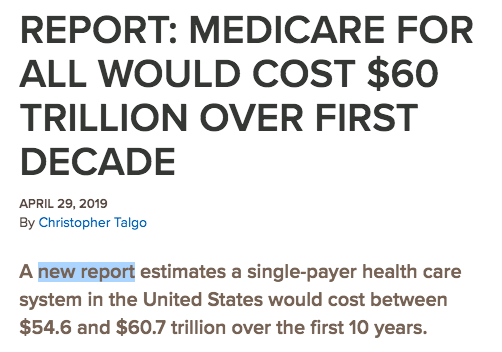 Then, in the text of his piece, Talgo writes:

In his earlier report, Blahous calculated a cost of $32.6 trillion over the first 10 years and possibly $38.8 trillion based on provider rate and drug price assumptions.

The “new” report that Talgo cites is really a brief paper Blahous published at AEI in February of this year. In it, Blahous actually tones down his language considerably, noting at one point that Medicare for All advocates are exactly right when they cite his estimate as showing that Medicare for All would cost basically the same as what we already spend on health care:

M4A supporters are correct to observe that Americans already pay for the vast majority of health spending that would occur under M4A and that most of M4A’s costs are therefore not “new” to the national economy. Specifically, my study projected that M4A would not qualitatively change total national health spending. Instead, national health spending would be somewhere within the range of 96-107 percent of current projections by 2031, depending on the specific assumptions.

But what do we get for this reform that does not meaningfully change total health spending? We get the elimination of cost-sharing. We get dental, hearing, and vision benefits. And we get the extension of insurance to 30 million more Americans. Blahous says we can have all this for what we already spend on health care in this country.