Elizabeth Warren and her daughter Amelia Warren Tyagi wrote a book in 2004 called The Two-Income Trap, which argued that the shift away from male-breadwinner/female-homemaker (“traditional”) families and towards dual-earner families paradoxically increased financial instability without really increasing standards of living. Recently, conservatives have begun spinning out arguments that start from the assumption that Warren’s thesis is true and then conclude that traditional families are better and should be encouraged in various ways.

The problem is that Warren’s thesis is not true. There are a lot of useful nuggets in her book, especially in the later chapters that deal with bankruptcy, Warren’s area of expertise. But the two main claims of the book — that modern dual-earner families are not financially better off than prior traditional families and that female homemakers used to function as unemployment and disability insurance — are clearly wrong.

Warren’s argument that dual-earner families are no better off than old traditional families is based on what can only be described as a completely bogus and misleading analysis of income and consumption trends over time.

The bogus aspect of the analysis is driven by confusions about inflation. Below is the table from the appendix of Warren’s book that drives the shocking finding that dual-earner families have less “discretionary income” than traditional families of old. 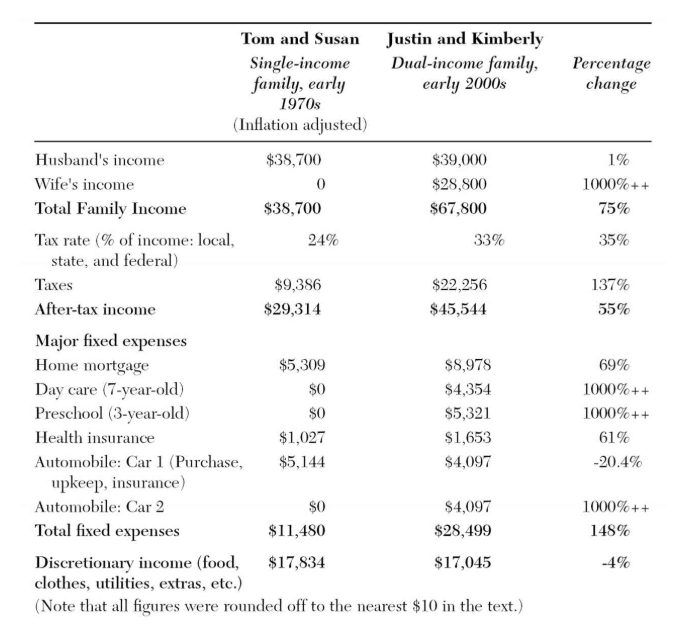 In footnote 9 of chapter 2, she explains that, by “inflation adjusted,” what she means is that she took the nominal dollar amounts from the 1970s consumption and income survey she used and adjusted them up by plugging them into the BLS inflation calculator. There are two problems with doing this.

First, the BLS online inflation calculator uses the CPI-U index. But she should be using the CPI-U-RS index. Under the CPI-U-RS, the income of the 1970s family is actually about 13 percent lower than she reports it as, and so they clearly have less discretionary income than the early 2000s family even if you accept everything else about Warren’s analysis.

Second, everything else about Warren’s analysis is technically mistaken. She takes each category of expenditure and adjusts it by the overall CPI-U instead of the CPI-U for that particular category of expenditure. So the home mortgage column is adjusted by overall inflation rather than housing inflation. The same is true for health insurance and cars: they are adjusted for overall inflation rather than health care and car inflation.

Taking components of the consumption basket and adjusting them by the inflation rate of the overall basket like this is completely nonsensical for these purposes. To see why, consider that discretionary expenditures here appears to mostly consist of food and clothing, categories where prices have grown more slowly than overall inflation. Thus, if the discretionary income category was adjusted for inflation using a consumption basket that matched what it buys, the 1970s “discretionary income” would have probably been much lower than what Warren reports it as.

The misleading aspect of the analysis also has two main parts.

First, the home mortgage, in addition to not being properly adjusted for inflation, also does not indicate that the average home in the 2000s has 33 percent more square feet than the average home in the 1970s. Perhaps it was a mistake for homes to be built that large, but it’s not simply a run up in prices driving the higher mortgage. It’s more housing being purchased.

Second, the child care expenses, which are responsible for $9,600 of the increase in “fixed expenses” for the 2000s family are temporary in nature. This family has a 7-year-old and a 3-year-old and therefore has related child care expenses. But in a few years, these expenses will go away. To get a sense of the average financial position of a dual-earner family versus an old traditional family, you have to look at their situations across their entire lifecycles, not compare them at the worse few years that the dual-earner family has (i.e. the years where they have multiple young kids). If you assume that they only have these $9,600 of child care expenses for 15 years, then that means they don’t have them during the other 25 years of their careers. Thus, those 25 years would give them $240,000 more lifetime “discretionary income” than the 1970s family has.

The Homemaker as Welfare State

Warren’s argument that homemakers operated as spare workers that would enter the workforce when the male breadwinner became unemployed or disabled is both implausible on its face and lacks an empirical basis.

The reason it is implausible is that unemployed or disabled workers are eligible for welfare benefits: UI, SSDI, and SSI. This is true now and it was true in the past. So you don’t really need homemakers to go into the workforce in those scenarios (Warren seems to believe that this was a widespread phenomenon mostly because this is what happened in her own family). Also homemakers would have little experience in the formal labor force and would therefore seem to struggle to quickly get a job, let alone one that was able to replace the earnings of the unemployed or disabled breadwinner.

In 1996, Jonathan Gruber (now of Obamacare fame) and Julie Berry Cullen published a study on this question titled “Spousal Labor Supply as Insurance: Does Unemployment Insurance Crowd Out the Added Worker Effect?” From the abstract:

We consider the role of spousal labor supply as insurance against spells of unemployment. Standard theory suggests that women should work more when their husbands are out of work (the Added Worker Effect or AWE), but there has been little empirical support for this contention. We too find little evidence of an AWE over the 1984-1993 period. We suggest that one reason for the absence of the AWE may be that unemployment insurance (UI) is providing a state-contingent income stream that counteracts the negative income shock from the husband’s unemployment. We in fact find that increases in the generosity of UI lower labor supply among wives of unemployed husbands. Our results suggest that UI is crowding out a sizeable fraction of offsetting spousal earnings in response to unemployment spells, although even in the absence of a UI system the spousal response would only make up a small share of the associated reduction in family income.

Gruber’s review of the literature finds little empirical support for the theoretical idea that spouses enter the labor force when their husbands are out of work. Gruber does some math to show that this is mostly because unemployment benefits already serve the purpose of replacing the incomes of unemployed workers. Then he shows that, in a counterfactual scenario where there were no unemployment benefits, wives would go into the labor force more to offset the earnings losses of out-of-work husbands, but that even in that scenario the wives “would only make up a small share of the associated reduction in family income.”

Just Do the Welfare State

Why did Warren go so far off the rails in this book? It is impossible to say, but I’d speculate that there are two main reasons.

The first is that, being a bankruptcy expert who was an advocate of lenient bankruptcy laws, Warren was invested in trying to show that families were not going bankrupt due to recklessness but rather because of very legitimate financial struggles. She realized that one possible argument against that was to point out that the rise of dual-earner families means that family units are richer than ever, and so she sought to prove that they aren’t actually richer when you look at it the right way.

The second is that Warren just did not seem to have a very developed view of the welfare state. Anyone approaching these questions from a welfare state lens would have spotted the problems clearly and known the answers to them immediately. Families with young children are hit with severe punctuated costs as they have to manage leave and child care, often when the parents are themselves working entry level jobs? Then provide family welfare benefits as in the Family Fun Pack. Job loss and disability are pushing families into bankruptcy? Then provide more generous unemployment and disability benefits.

As with many other problems in the American economy, the real issues Warren identified in her book can be solved by just doing a regular welfare state. A tortured effort to show that dual earning actually makes people less well off financially is just silly. Conservatives trying to build off the theory of the two-income trap are constructing errors on top of errors.