Joe Biden released a health plan today. Its most significant elements are: 1) the creation of a public option, 2) the increase of subsidies for those buying plans on the exchanges, especially for families with incomes above 400 percent of the poverty line, and 3) the option for individuals in non-Medicaid-expansion states to enroll in the public option for free. Biden claims that the resulting system will insure 97 percent of Americans, meaning 3 percent will still be uninsured.

There is much to quibble with in Biden’s plan.

If individuals in non-Medicaid-expansion states can enroll in the public option for free, then won’t every state repeal their Medicaid expansion to save state money? I suppose that’s fine depending on how good the public option is, but is that really the intended goal?

More generally, Biden’s plan has the same problem as any other plan that does not create a national health insurance system: it causes enormous amounts of insurance churn and instability, further immiserating people when they face hardships like loss of job, loss of spouse, loss of Medicaid due to income increase, and every other negative life event.

The most remarkable thing about Biden’s plan is that it does not even aim to provide universal insurance coverage. The more moderate wing of the Democratic party has mostly been putting out plans that purport to achieve universal coverage (e.g. through auto-enrollment mechanisms) without national health insurance. But Biden is literally doubling down on “preserving Obamacare” by preserving a class of uninsured people.

His campaign claims that the plan will leave around 3 percent of Americans uninsured. These sorts of estimates should be taken with a grain of salt as it is very uncertain how people will respond to the reforms. For instance, the CBO initially estimated that 22 million Americans would sign up for insurance on the Obamacare exchanges, but only half that many actually did.

Even if you suppose that Biden’s estimate is right and the uninsurance rate does go to 3 percent, that still implies an enormous amount of unnecessary death caused by a lack of insurance. One commonly-used (e.g. by CAP) estimate states that 1 unnecessary death occurs annually for every 830 uninsured people. This means that during the first 10 years of Bidencare, over 125,000 unnecessary deaths will occur from uninsurance. 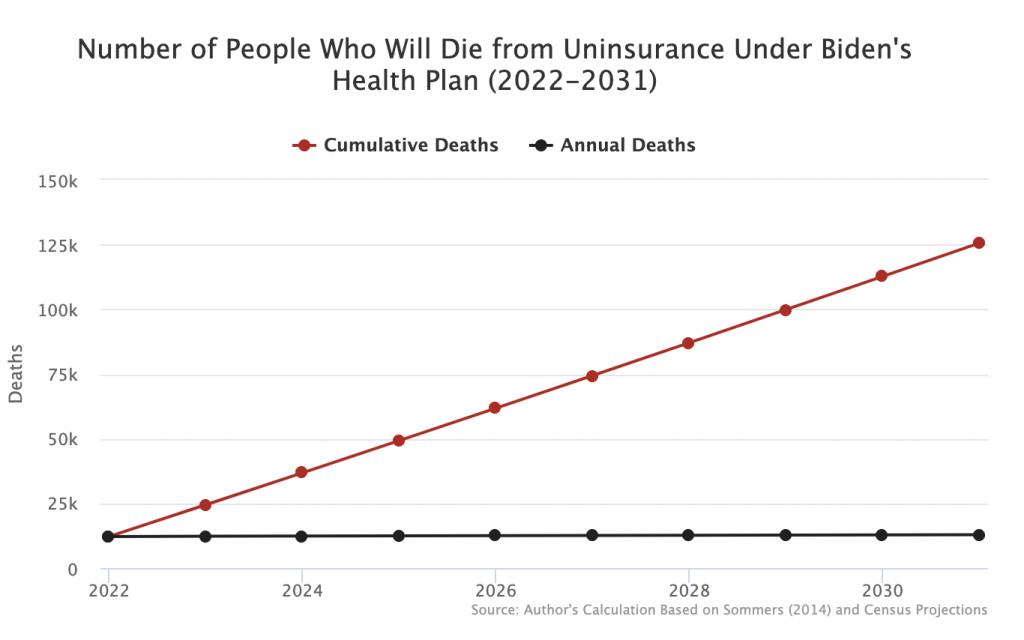 This is equivalent to the death toll of forty-two September 11 style attacks. Needless to say, this is not acceptable. No Democrat should be running on a health plan that does not provide universal coverage.