We now have detailed child care plans from Elizabeth Warren (I, II, III) and Bernie Sanders. In this post, I compare the plans with a focus on how the costs of each are distributed between the federal government, state and local governments, and families who use the child care system.

The Sanders plan is very straightforward: the federal government will cover all of the costs. State and local governments are not required to cover any of them. Families who use the child care system are not charged any user fees.

The Warren plan is more complicated and charges substantial user fees that will create many problems and undermine some of the purposes of child care benefits. In this sense, it is more “technocratic” understood as needlessly and counterproductively complex.

Under Warren’s plan, the federal government covers 80 percent of the subsidies for children in families with incomes below 200 percent of the federal poverty line and 50 percent of the subsidies for children with incomes above that amount. State and local governments are expected to pick up the rest. This split raises serious questions about how many areas will actually participate in Warren’s child care system. As we saw with Medicaid expansion, many parts of the country refuse to participate in benefit expansions that require local governments to pick up even a small fraction of the bill.

More troublingly, Warren’s plan relies upon quite large user fees from the families that use the program. The below graphs detail these user fees in both absolute dollars and as a percent of family income. 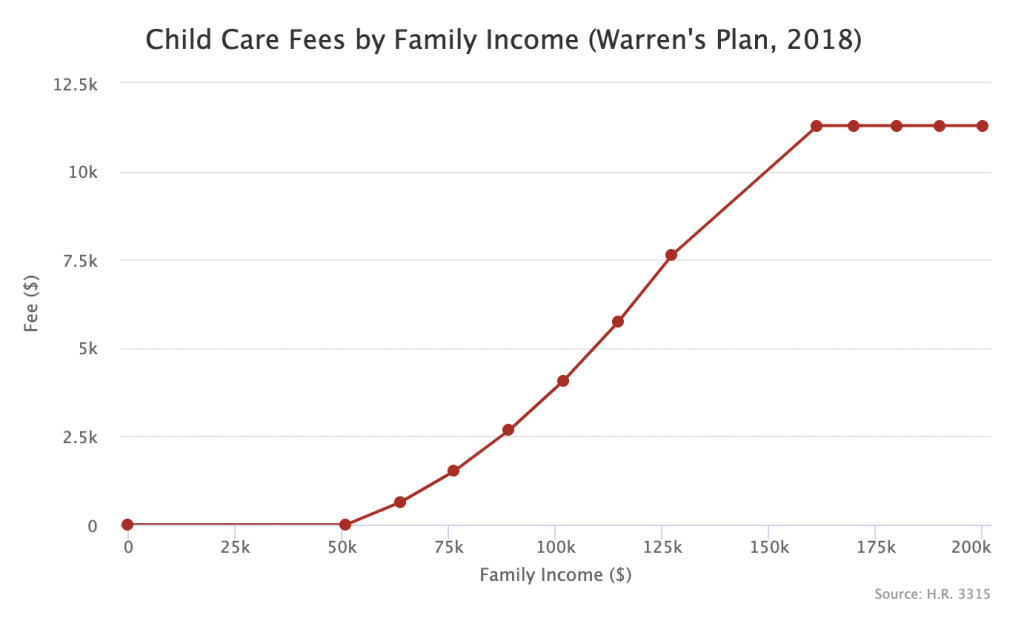 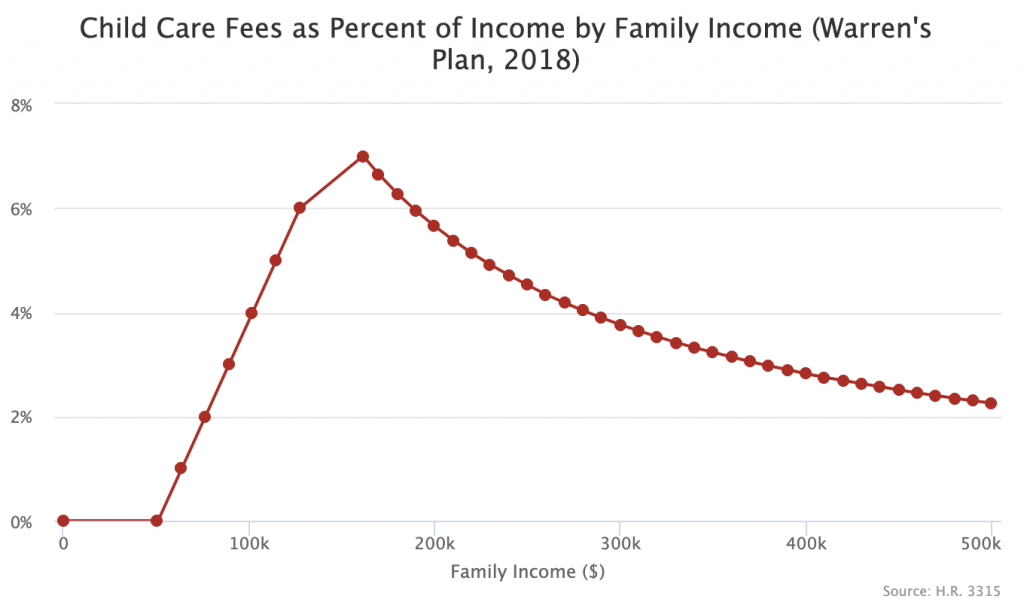 These graphs use a national average child care fee derived from CAP estimates of what high-quality child care should cost, which is $11,292. This does not mean every place in the country will see their child care fees capped at that level. In high-cost areas, the maximum amount a high-earning family might pay will be just as high as it is now, which in some places is well over $20,000.

There are at least six problems with this design.

First, it creates a complicated bureaucratic hurdle involving tens of millions of pages of unnecessary paperwork every year. These hurdles are the hardest on the poor, many of whom will struggle to document and then update their income and family size.

Second, it does not actually save the typical family in formal child care that much money. According to the analysis Warren released alongside her plan, “the typical American family with young children currently paying for formal care would see their annual child-care costs decline by 17%.” I guess 17 percent is better than 0 percent, but it doesn’t really stack up to the lofty rhetoric Warren uses to sell her plan and will probably be an enormous let down.

Third, the user fees create a variety of strange and inegalitarian asymmetries. Families who have more kids end up paying more fees over their lifetime than families that have fewer kids, defeating one of the purposes of family benefits, which is to equalize the financial burden of children across families of different sizes. Even families who have the same number of kids end up paying very different amounts depending on the spacing of their kids. A typical two-child family that has twins would pay 5 years of user fees. Another two-child family that spaces their kids out by 5 years would pay 10 years of user fees. Same number of kids, twice the fees.

Fourth, the user fees defeat the income-smoothing purpose of child care benefits. Under Warren’s plan, when families add a child to their family and partake of the child care, their fee-adjusted income goes down for as many as five years and then comes back up once they get out from under the child care burden. This negative income shock is unpleasant and can be fixed by providing child care for free and covering it with taxes that are applied to everyone regardless of whether they currently have a young child in their family unit.

Fifth, the user fees discourage utilization of the service, but there is no reason to do that. In other contexts, user fees are sometimes charged to prevent excessive utilization of a service by an individual or in aggregate. But you can’t really over-utilize child care anymore than you can over-utilize K-12 school. Dinging middle-earners and high-earners with fees works against Warren’s own stated purpose of ensuring parents (especially women) are able to stay in the workforce. It also can encourage segregation as high-earners have less of a reason to place their kids in subsidized centers.

Sixth, the user fees don’t even raise very much money. Maybe you would accept all these unsavory outcomes if it helped you “save a lot of money” understood as reducing the government cost by shifting it onto middle-earners and high-earners with young children. But applying Warren’s fee schedule and utilization assumptions to the 2018 Current Population Survey reveals that the total user fees collected through this scheme are only around $33 billion per year, which is 0.16 percent of GDP or around 5 percent of the military budget.

Even if you wanted to collect this money specifically from the middle and upper classes like Warren’s plan does, it would be much better to do so via tax. Raising the top four tax brackets ($168,401+ for a family of four) by 2 percentage points would more than cover it. Due to the standard deduction, such a change would only increase tax on those with incomes over $193,201 and even then only by 2 percent on every dollar earned beyond that amount. This would eliminate the negative income shock of the child care fees, spread the burden out among the entire high-earning population, not just high-earners who currently have young kids, and solve all of the other problems identified above.

As is typically the case when Warren and Sanders square off on policy, Sanders has the upper hand here. His superior understanding of the issues and technical details allows him to avoid the traps Warren often falls into when designing welfare programs. There simply is no good reason to have user fees like the ones Warren imposes and many good reasons not to.