Joe Biden announced on Thursday his intention to lower the Medicare eligibility age to 60. This was presented as a unifying gesture towards the left, but it doesn’t really make sense for that purpose or on the merits. Any age-based incremental expansion of Medicare should start with children, not with older working-age Americans.

When thinking about expanding Medicare, I believe it is useful to start with the below graph, which breaks down insurance status at every age. To produce this graph, I average every age with the year before and after it (so age 20 is actually the average of age 19, 20, and 21) and I assign individuals on multiple kinds of insurance to the insurance that is the lowest in the graph’s legend (thus elderly people who are dual eligible for Medicare and Medicaid are counted under Medicaid). 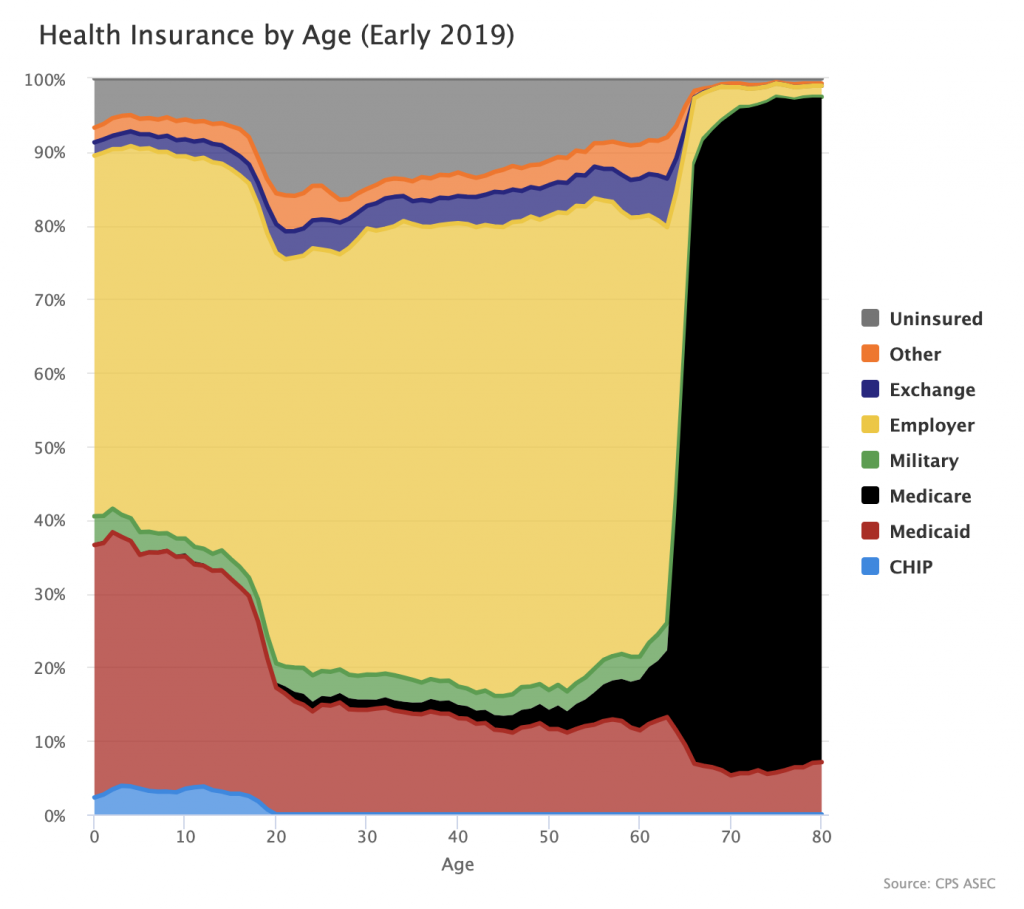 The end goal of Medicare for All advocates is to see the Medicare area (black) swallow the rest, ushering in a seamless, comprehensive national health insurance system.

Most bills that aim to do this move everyone onto Medicare over a few years in big chunks. The precise chunks, and their sequencing, differ from bill to bill, but these differences don’t matter much because the bills all terminate in the same outcome.

If you are not going to pursue a bill like that, but instead pursue a bill that adds just one chunk of people to Medicare, then the precise chunk you use matters a lot. And you need to be very thoughtful in making your chunk selection.

The chunk you choose should at minimum (1) benefit the group you are politically courting, (2) create conditions that plausibly promote further expansion of Medicare, and (3) fit reasonably well within the logic of the prevailing Medicare system.

Biden’s plan to expand Medicare to ages 60 through 64 fails on all counts, which is perhaps why Alexandria Ocasio-Cortez described it recently as “insulting.”

It fails criteria one because Bernie voters are overwhelmingly young adults. His support among ages 60 through 64 is vanishingly low. To give a crumb to Bernie voters, you need to do something that includes the youth.

It fails criteria two because this particular type of expansion is not likely to spur support for further expansion. Indeed, as Matt Yglesias and Ryan Cooper point out, the 60 to 64 age group is actually more likely to increase their opposition to Medicare expansion once they are benefiting from it. Furthermore, as a technical matter, moving the Medicare eligibility age downward is a strategy that hits a hard limit pretty quickly. You can’t, for instance, bring everyone over the age of 50 onto the Medicare rolls because that creates a wild asymmetry between old working-age adults whose only contribution to the health care system would be payroll taxes and young working-age adults who would be contributing the same payroll taxes and paying full freight for their own private plan.

It fails criteria three because the logic of the current Medicare system is to provide health insurance to people who are not expected to work, specifically elderly people and disabled people. The idea is that workers should contribute a portion of their earnings to a central fund that takes care of people who cannot work. But nondisabled people between the ages of 60 and 64 can work, do work, and are expected to work within our current public understanding of when retirement should occur. Bringing them in breaks the logic of the program and, as noted already, creates hard-to-justify asymmetries between workers.

Medicare for Kids — defined as a program of free health care for everyone between the ages of 0 and 25 — satisfies these three criteria quite beautifully.

Medicare for Kids also creates conditions that should push further Medicare expansion as individuals who age out of Medicare will be an obvious constituency for finishing the job and bringing in the remaining 26 to 64 age group.

Finally, it fits within the logic of Medicare, and thereby avoids problematic asymmetries, because we do not expect children to work and, in the case of ages 18 to 25, we do not expect them to pay for their own insurance. Indeed, the logic of including kids in Medicare is so obvious that it was part of some of the initial proposals for the program under the name Kiddiecare.

To be sure, expanding Medicare to kids is not the only thing we should do to shore up the program. As I noted in my Cleaning Up the Welfare State paper, there are many things that should be done to improve Medicare and, as is relevant here, to make sure it actually serves all of the constituencies that it is supposed to serve. That means, at minimum, insuring that everyone who is age 65 or older is eligible for premium-free Medicare regardless of their work history and eliminating the two-year waiting period to receive Medicare benefits for individuals who are on Social Security Disability Insurance or other Social Security programs where the two-year waiting period is in place.