The top advocate of the Job Guarantee in Australia, Bill Mitchell, has recently teamed up with a prominent right-wing commentator in the country to advocate for a “job guarantee” program as a replacement for other unemployment and welfare benefit programs.

Unemployment is the one commonality between all disadvantaged Australians. Welfare dependency has become intergenerational as unemployment has become entrenched. Pearson, has spent his public life arguing that the social effects of welfare dependency are debilitating – and must be tackled if the Indigenous crisis is to ever be turned around.

All disadvantaged Australians face this same problem. The destructive consequences of passive welfare are not a racial or ethnic condition, they arise from what economists like Mitchell, term hysteresis: the effects of long-term unemployment.

We have combined our thinking to agree on a jobs agenda in the belief that the best welfare to work program is to provide a job opportunity for everyone who needs one.

This sort of stuff comes as a shock to people who have never actually read the decades of papers written about the Job Guarantee, but of course I have been pointing out that this is the agenda for years. Newcomers to the idea with less background in its history or development eventually denounced Bill Mitchell for this and said his views were a deviation from the Job Guarantee mainstream. This then provided fodder for one of Mitchell’s legendary marathon blog posts in which he rightly points out that this is in fact what Job Guarantee advocates have been saying all along.

Here is a Stephanie Kelton slideshow from 2012: 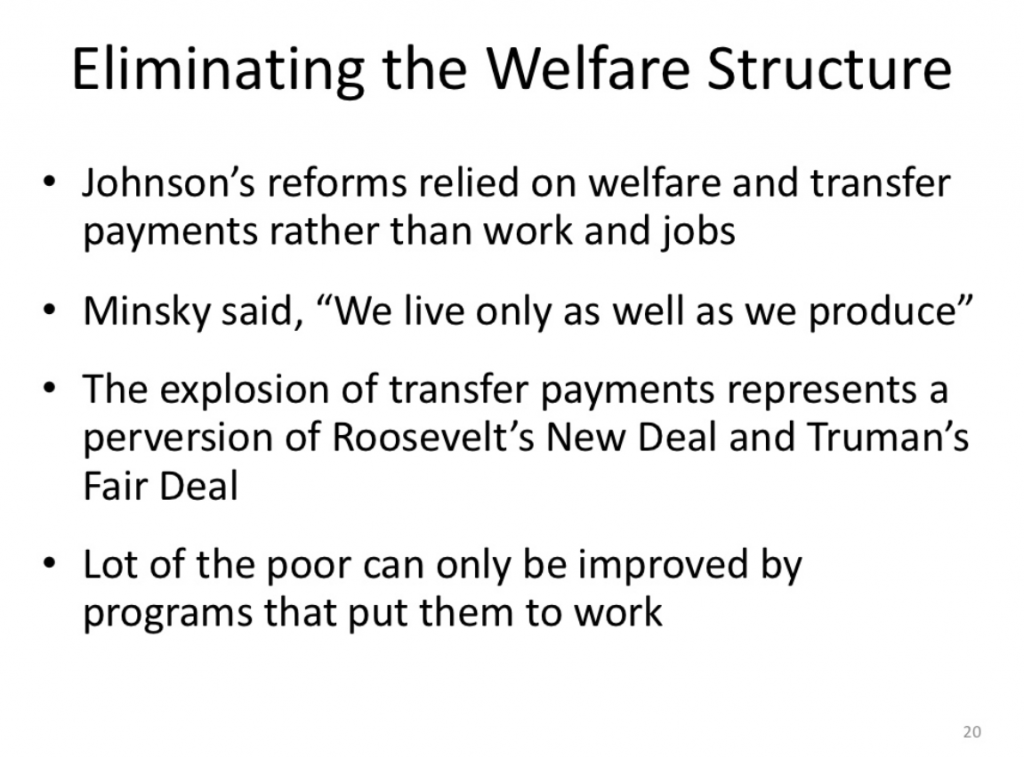 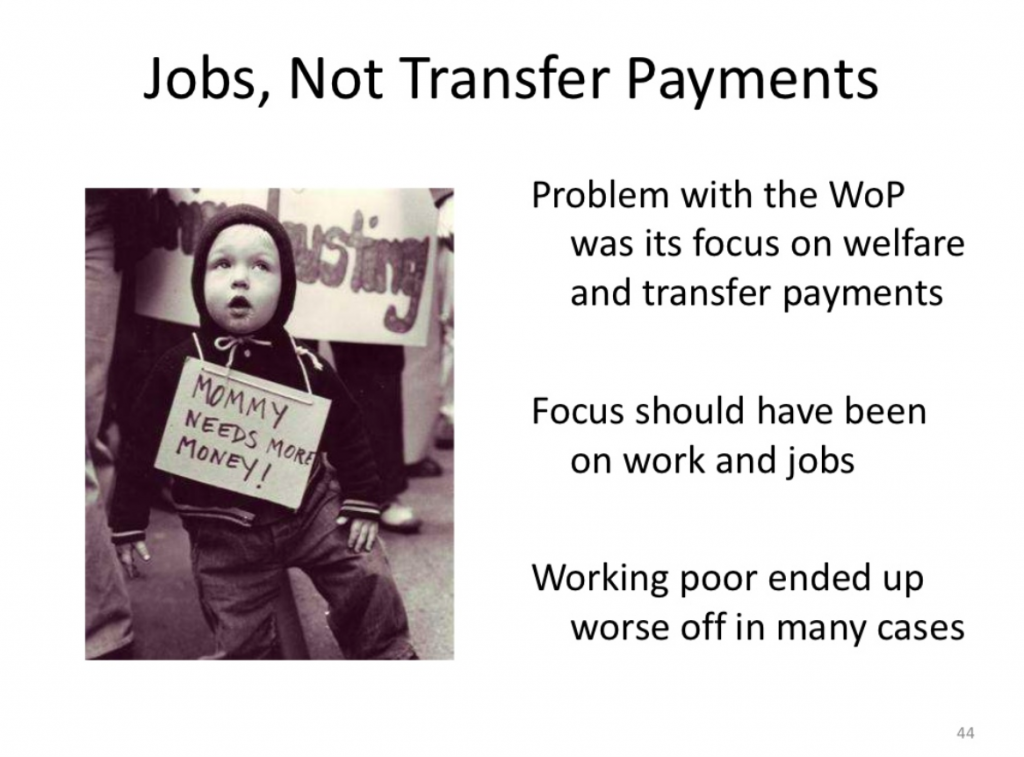 Even today, Kelton can be heard recycling an old line from this period in which she says “we need to turn the unemployment office into the employment office” or similar.

Here is a Randy Wray article from 1997, in which he approvingly argues the JG will be harder on the unemployed because it requires them to work:

In the absence of [JG], these workers can be obtained at a mark-up over the value of the package of social spending and private income obtained when unemployed (unemployment compensation, food stamps, under-the-table work, handouts, etc); this mark-up, however, is likely to be higher than the markup over $12,500 since it must be sufficient to make employment preferable over idleness.

The guarantee of an income through a job is the first step toward the elimination of the welfare mess.

A job-based, rather than a transfer-based, strategy against poverty is a first and vital step toward making our economy work better.

Permanent dependence on expanding systems of transfer payments that have not been earned is demeaning to the recipient and destructive of the social fabric. Social justice and individual liberty demand interventions to create an economy of opportunity in which everyone, except the severely handicapped, earns his or her way through the exchange of income for work.

More quotes can be found in an earlier post here.

The Job Guarantee as both an ideological and practical matter has always been rooted in a hatred of welfare benefits and especially unemployment benefits. Advocates believe that these benefits are bad for society, bad for the labor market, and even bad for their recipients who are unwittingly lured into self-destructive welfare dependency. That’s certainly a view you can hold. It seems like the majority of Americans held it in the 1990s, which is why we got welfare reform, and even today it’s a very prominent view in the American and Australian right.

In addition to rightly defending the anti-welfare provenance of the Job Guarantee agenda, Mitchell also hypothetically asks at one point: what is the alternative? Specifically he asks the following question: if you don’t like the current unemployment benefit system because, e.g. it is too stingy or harsh, and you don’t like the job guarantee, then what is the alternative? His answer: “Effectively a UBI or some version of it,” which of course is to him totally unacceptable.

This is not actually the answer to his question, but it is very revealing that he thinks it is. To understand the actual answer to the question, it is useful to remember that the Job Guarantee consists of the following two elements:

There are countries who have this kind of basic unemployment allowance or something similar to it right now. The reason he thinks it is a UBI is not because it actually is one, but because for him the “UBI” and the conventional welfare state more generally are the same thing in that both commit the sin of providing benefits to people without requiring them to work. I’ve always wondered why JG people are so obsessed with UBI when their actual agenda is a reform of unemployment benefits, but it makes more sense once you realize that for people like Mitchell, generous unemployment benefits are “effectively a UBI or some version of it.”

Of course, it’s always possible that some JG leaders have moved on from their welfare-hating days while others, like Mitchell, have not. But if that is the case, then there remains some very simple questions about what JG advocates think the overall unemployment system should look like. It’s clear that they think a basic unemployment allowance with work requirements should be part of it and, if you take them seriously, they also think that should not be the only part of it. But what then should the overall scheme look like?

In describing any overall scheme like this, what you want to do first is start with the benefit level. It’s clear what JG people want the minimum unemployment benefit to be (the minimum wage, which according to current Democratic consensus, is $600 per week), but less clear what they think benefits beyond the minimum should look like. For our purposes here imagine that in the new overall scheme, an individual is entitled to the greater of:

This would be a fairly conventional unemployment benefit design, in which jobseekers receive a percentage of their prior earnings but never below the minimum benefit.

Once you have established this income-replacement formula, the next question is: how are the Job Guarantee’s workfare activation requirements supposed to be applied to these unemployed people? This is where things get really muddled and confusing. There are the following options:

You could also make everyone do workfare to receive their check, including (previously) high-earners who are receiving high unemployment checks. But this seems to go against the idea of having “both job guarantee and unemployment insurance” as our current UI scheme does not impose these kinds of work requirements on people.

The last option then is to impose the workfare requirements on nobody. In this scenario, you could imagine having a purely voluntary program in which any person on unemployment benefits regardless of their benefit level could decide to do workfare tasks or decide not to and still receive the same benefits regardless of which decision they made. In this sense, the program would amount to volunteer opportunities, which unemployed people are already allowed to do, but perhaps could be better facilitated by a government agency. Of course, if you want to facilitate volunteering, there is no reason to limit that to unemployed people per se. You could just generally have a volunteering clearinghouse that anyone looking to volunteer could use, including teens, seniors, and whomever else.

I am genuinely curious to know how JG advocates intend to integrate their program with the overall unemployment system. In the past, I have repeatedly asked people like Pavlina Tcherneva if she would be OK allowing unemployed people to receive the same minimum unemployment benefit she has in mind ($600 per week) without submitting to the workfare requirements. But although Tcherneva is generally open to chatting about the Job Guarantee, she always freezes up and refuses to answer that question. I wonder why.