The USPS has gotten a lot of attention lately as Donald Trump is attempting to muck it up in order to make mail-in voting more difficult and less credible. This attention has reopened a variety of latent debates about the USPS that I will opine on below.

Based on the official accounting, the USPS had $71.154 billion of revenue and $79.879 billion of expenses in fiscal year 2019. Thus, its revenue was equal to 89 percent of its expenses.

Some people present this loss as a self-evident indicator of a USPS in decline. But looking at the history of USPS finances suggests that this is a pretty normal outcome. 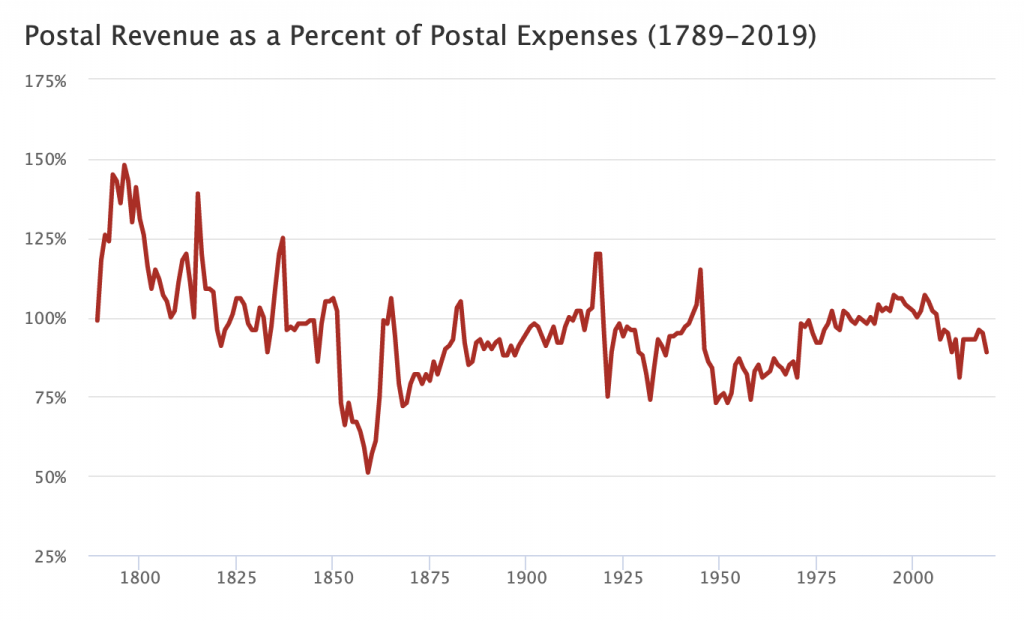 This does not necessarily mean one has to be happy with the current financial performance of USPS. It just means that the performance is fairly typical by historical standards. The USPS usually posts a loss and that loss is normally about as big as it currently is.

This is a true claim at least as it pertains to the official accounting. After the prefunding requirements were passed in 2006, retiree health benefits expenses increased pretty dramatically, both in nominal dollars and as a share of postal revenue. 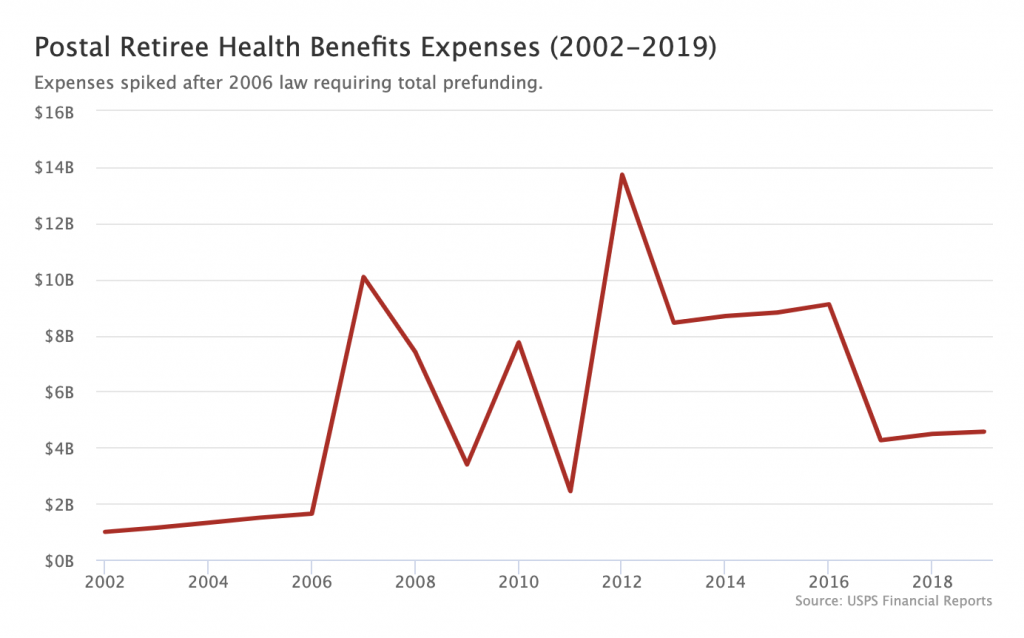 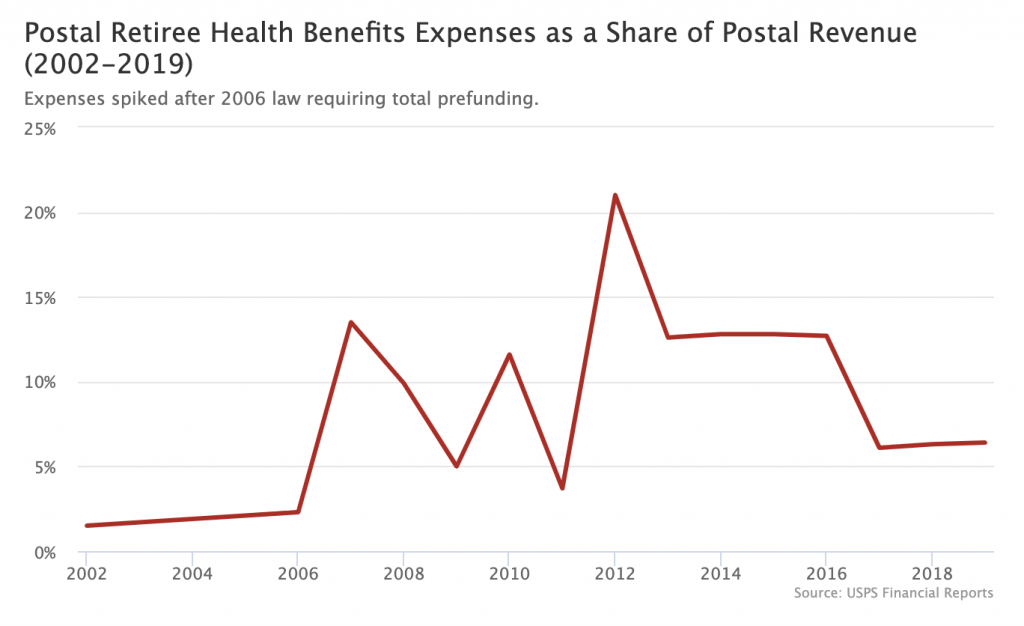 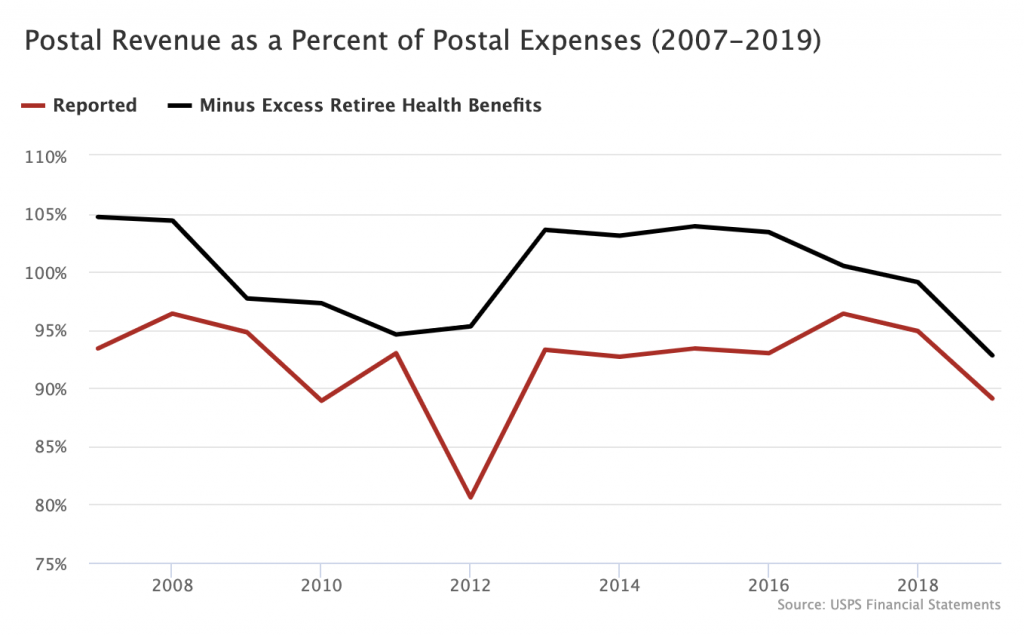 Over this period, average revenue as a percent of expenses was reportedly 92.3 percent. Removing excess retiree health benefits expenses using this rough approach brings the number just above 100 percent.

While it’s true that this prefunding requirement has mucked up the USPS’s financial statements, it does not seem to have actually caused serious operational problems. In its 10-K, the USPS explains that it simply defaults on these payments and then adds them to their liabilities. So although these amounts show up as current-year expenses, the USPS is not actually diverting cash flow to pay for them.

Another thing left-wing commentators often claim is that the USPS is a government service and so it is categorically wrong to talk about its profits and losses. The rhetoric used to make this point is a little irritating and confused, but it does hit upon a distinction that is often made between different kinds of government production. However, that distinction actually cuts against this point.

One type of government production is what are often called “general government services.” This typically refers to production that is financed with little to no user fees. Example entities include police departments, fire departments, libraries, school districts, and the military.

Another type of government production is what are often called “state-owned enterprises.” This typically refers to production that is mostly or entirely financed with user fees. Example entities include municipally-owned utility companies that provide water, electricity, and gas as well as government-owned rail and subway networks.

As a matter of taxonomy, it is pretty clear that the USPS is a state-owned enterprise, not a general government service. So the “it’s a service” type rhetoric doesn’t really make much sense on its face.

A more sophisticated way to make a similar point would be to talk about the various purposes that state-owned enterprises can have. Some SOEs have a purely commercial purpose, meaning that the goal of the SOE is simply to operate a profit-making business and remit the dividends to the state. Other SOEs have a mixture of commercial and social purposes.

In the case of the USPS, the SOE has an explicit social purpose called the universal service obligation, which requires the USPS to ensure that all users receive an adequate minimum level of services at a reasonable price. In practice, this means that the USPS, among other things, intentionally supplies money-losing postal services to remote areas of the country. A USPS that had purely commercial purposes would, as FedEx and UPS do, simply not provide services to those areas or charge them much higher prices.

People can debate about the importance of this particular social purpose and there may very well be room for the USPS to improve its net income while still meeting its universal service obligation. But for as long as the USPS is legally required to accomplish money-losing social objectives, it is silly to be mad at it for its lackluster financial performance.