The Biden Plan for Housing is presented as four verbose planks that boil down to fair housing rules, financial assistance, construction subsidy, and homelessness. As a whole, it’s an expansion of existing public-private partnership models for housing that grew out of Ronald Reagan’s Urban Recovery Act and his Tax Reform Act: the Housing Choice Voucher (HCV) and the Low-Income Housing Tax Credit (LIHTC).

While embracing some urbanist and desegregationist ideas, and even incentivizing needed zoning reform, the plan does nothing to confront four decades of bipartisan policy designed to decimate publicly owned housing and direct nearly all public expenditures on housing into private hands—mostly banks, at that.

Expectedly, there isn’t a whisper of public asset expansion (or even shared equity) in the Biden plan. There are, however, several proposals worthy of investigation or criticism: the HCV entitlement, modified LIHTC allocations, and several fair housing policy levers Biden intends to pull along the way.

A particularly notable concern that goes unaddressed in the platform is the need for the preservation of affordable housing—permanently. One approach to this is the use of public trust models, like community land trusts and real estate investment trusts, which we will briefly explore.

The Housing Choice Voucher, or HCV, is a Housing and Urban Development (HUD) program administered by public housing authorities (PHAs) that pays a family’s rent (up to a ceiling—more on that shortly), with the family’s contribution capped at 30% of their income. The crux of Biden’s housing plan is turning the Housing Choice Voucher into an entitlement—that is, providing the assistance to every household that meets the eligibility requirements (and giving households just over the eligibility limit a refundable renter tax credit for a portion of the difference between their rent and 30% of their income). 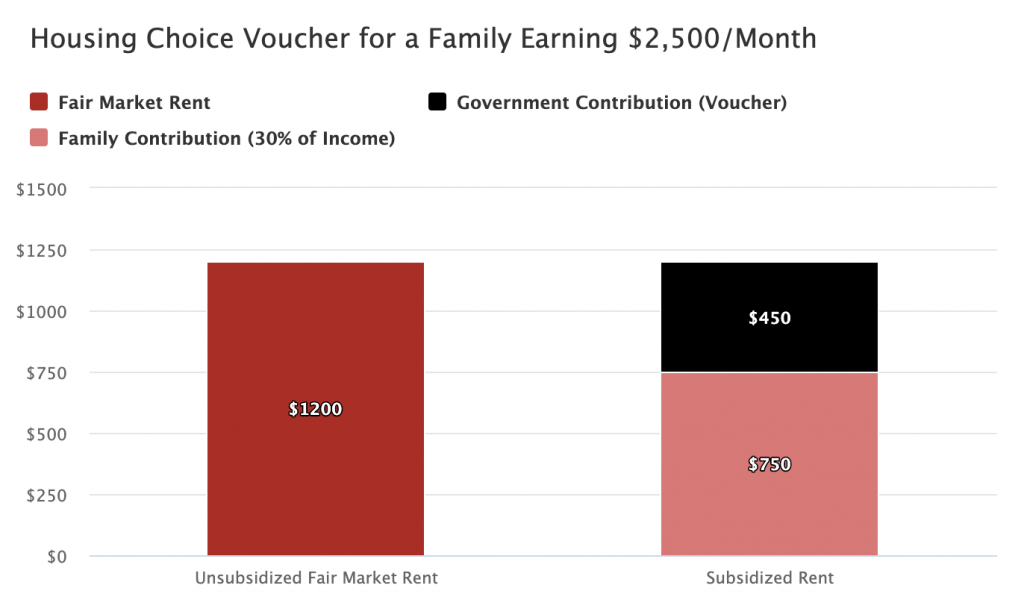 This is, on its face, a net good for the 22 million cost-burdened low-income households in the US, only 5 million of whom currently receive the vouchers. The 17 million new households receiving the voucher will benefit from stable housing and from reduced costs.

However, the criticisms of the voucher program are many. First and foremost is the incentive the program creates to reinforce economic and racial segregation. Currently, many voucher awards are calculated using HUD’s Fair Market Rent (FMR) calculations, which are based on large citywide samples—skewing the “Fair Market” ceiling much higher than the actual market rent in a disinvested neighborhood. Landlords in these neighborhoods, then, can make more money keeping voucher-holders in those neighborhoods than they would renting their apartments out to non-voucher holders at the non-subsidized market rent—and they do.

Some PHAs have recently experimented with calculating fair market rent by ZIP code (called Small Area Fair Market Rents, or SAFMRs) to mixed results. In some cities, voucher holders did move into wealthier (“Opportunity”) neighborhoods at slightly higher rates, but in others there was a regression into deeper economic segregation.

Reducing the cost-burden of low-income households via an HCV entitlement is a noble goal, and many on the left before Biden have called for it. But even with fair housing protections like banning income discrimination (i.e., telling private landlords they must accept HCVs), the program could still wind up furthering economic and racial segregation, locking poverty deeper into already disinvested communities.

However, you wouldn’t have to ban source-of-income discrimination and cover landlords’ profit margins as thanks for taking in the poor if you simply built the affordable housing that’s needed—leading us into Biden’s plan for the Low Income Housing Tax Credit.

The Low-Income Housing Tax Credit (LIHTC) is responsible for building more affordable homes than any other housing program in the United States today, contributing to about one hundred thousand each year (the estimated need is 7 million). Interestingly, the government doesn’t “spend” a dime on it. Instead, the IRS is mandated by statute to generate tax credits (pieces of paper) which, when claimed by affordable housing developers and then sold to equity investors (like banks), reduce the tax liability of those investors, resulting in reduced tax collections for the IRS. Roughly $10 billion that would otherwise be collected is foregone each year due to LIHTCs.

The Biden proposal is somewhat vague, stating that “Biden will expand the Low-Income Housing Tax Credit with a $10 billion investment” with a hyperlink to an Obama administration Treasury recommendation for converting states’ unused Private Activity Bonds (PAB) into LIHTCs, a proposal which has been explained and critiqued extensively by Novogradac, an affordable housing industry firm.

There are a couple of simpler solutions to this. Staying on the current path, one could simply issue more LIHTCs.

The other option would be to begin a transition away from tax credit funding—where significant amounts of the subsidy are eaten up by middle-men: syndicators, investors, and general partners, rather than by the housing itself—and toward grant funding. Most LIHTC projects already receive large portions of their funding from a hodge-podge of grant programs. These concerns have been pointed out repeatedly by researchers and advocates like the National Low Income Housing Coalition and the Urban Institute.

Of course, issuing tax credits—or grants—alone will not result in the amount of housing that’s needed. Luckily, the Biden campaign has proposed pulling a few policy levers and offering some incentives and directives related to inclusionary zoning. If cities were to take a Biden administration up on these incentives, it could result in large swaths of land that would be greenlighted for affordable housing development, paving the way for cities to make use of more serious allocations of funding as proposed above.

LIHTC and the Corporate Tax Rate

As LIHTC is today’s dominant player (and a transition toward grant funding could not happen overnight) it is important to consider policies that impact its effectiveness. A major concern with regards to the LIHTC is that its effectiveness is married to the corporate tax rate. The lower the corporate tax rate, the fewer units the LIHTC will produce, and vice versa. In the world of affordable housing, this was widely noted when Trump’s Tax Cuts and Jobs Act of 2017 slashed the corporate rate from 35% to 21%, resulting in an estimated 14% reduction in the effectiveness (i.e., number of units produced) of the LIHTC.

This plays out in the financing and development arenas of affordable housing deals, where large corporations (banks) purchase the tax credits from affordable housing developers, usually in the range of $0.85 to $0.95 on the $1 face value of the credits. The higher the corporate tax rate, the more banks are willing to pay to reduce their tax liability—and the more affordable units get built.

Biden should raise the corporate tax rate not to the 28% he has proposed, but to the 50% level, or higher, from our greatest age of prosperity in the mid-20th century. In terms of affordable housing development, this change alone could yield a 30% increase in the efficacy of the program by pushing up the tax credit’s exchange rate.

Besides the insufficiency of the present LIHTC allocations, the biggest issue with affordable housing produced with LIHTCs is that its affordability is only enforced by the IRS for 15-year terms, renewable once, for a total of 30 years. Created in 1986 by Reagan’s Tax Reform Act, the program’s first rental properties began popping up in the late 1980s—just over 30 years ago.

The National Low Income Housing Coalition estimates that nearly 500,000 LIHTC housing units will age out of their affordability in the coming decade, and those numbers will only grow without an expansion of preservation efforts, which Biden indirectly addresses with modest appropriations to housing trust funds. 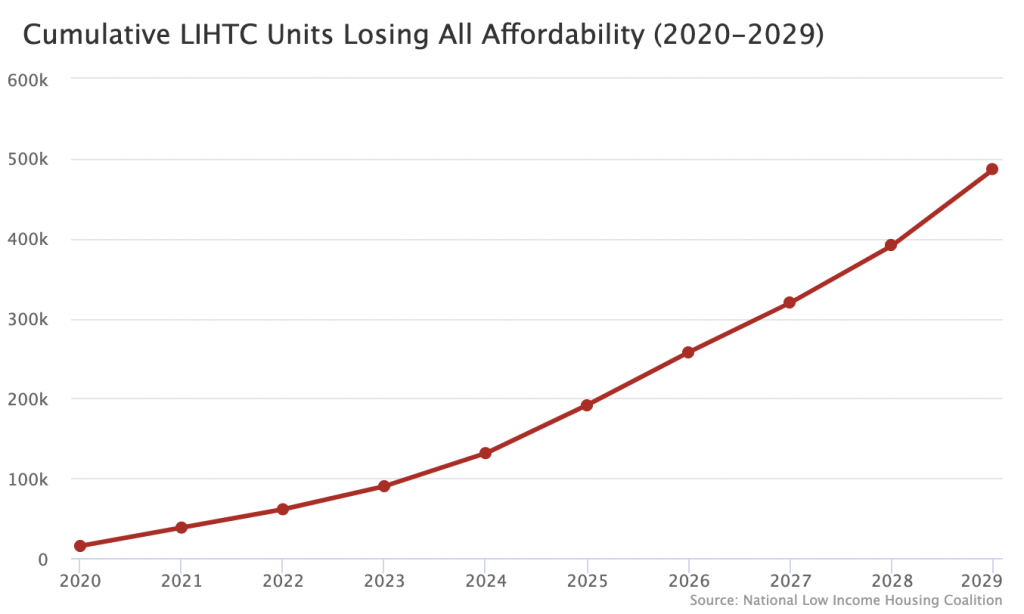 Once the affordability period expires, the government has no obligation, and the market has no incentive, to maintain the below-market rents. This creates a significant problem for 30-year-old LIHTC buildings (and their residents), especially those in need of repairs.

Conversely, one highly successful permanent affordability model in the United States is the land trust. Notably, the affordable housing strategy in 1980s Burlington, Vermont (under Mayor Bernie Sanders) involved the funding and founding of the now largest, and arguably most successful, housing land trust in the country, which owns and operates over 3,000 homes. The basic mechanism is simple: a nonprofit (perhaps a municipally owned or operated one) takes an equity stake in the property by writing deed restrictions or by using a ground lease—a tool that allows the land trust to own the land under the home and sell the actual structures, leasing the land to the homeowner for a nominal fee.

As Peter Gowan and Ryan Cooper explained in their 2018 paper for 3P, Social Housing in the United States, weaning the United States off of public-private partnerships for housing is no overnight task, but with a portfolio of half a million units ready to expire over the next decade with nowhere to go but the market, municipalities have a chance to bring hundreds of billions in public investment into permanent public hands. If well-financed, public land or real estate trusts could rehabilitate and permanently preserve expiring affordable housing for generations to come.

Any advocate for a sustainable, long-term model for housing affordability would be wise to consider a public trust approach to preservation.

Paul Williams is an Illinois-based housing policy professional working in government administration. You can find him on Twitter at @PEwilliams_.