Most policy analysts believe that the Earned Income Tax Credit (EITC) substantially reduces poverty and increases employment in an administratively efficient and well-targeted way. This is not true. In this paper, I show that simple mismeasurements have greatly overstated the efficiency and effectiveness of the EITC program.

To determine how much the EITC reduces poverty, researchers run a couple of simple calculations using the Annual Social and Economic Supplement (ASEC) of the Current Population Survey (CPS). In the first calculation, they determine how many individuals have a disposable income that puts them below the poverty line based on the Supplemental Poverty Measure (SPM). In the second calculation, they do the same thing, but this time with the EITC subtracted from each person’s income. The difference between the two numbers, which was 5.6 million people in 2018, is then declared to be the number of people pulled out of poverty by the EITC.

Unlike other benefit incomes, the EITC values in the ASEC are not based on survey questions. Instead, the Census imputes them by running a tax simulation on each unit’s reported earnings. This approach has three problems that cause the antipoverty impact of the EITC to be way overstated.

To fix these problems, I adjusted the ASEC’s EITC imputations to make them more accurate. The differences between my adjusted measure and the conventional measure are summed up in the table below.

On average, the conventional measure shows that the EITC reduces the poverty rate by 1.3 percentage points. Under the adjusted measure, it is 0.7 percentage points, which is 47 percent lower. 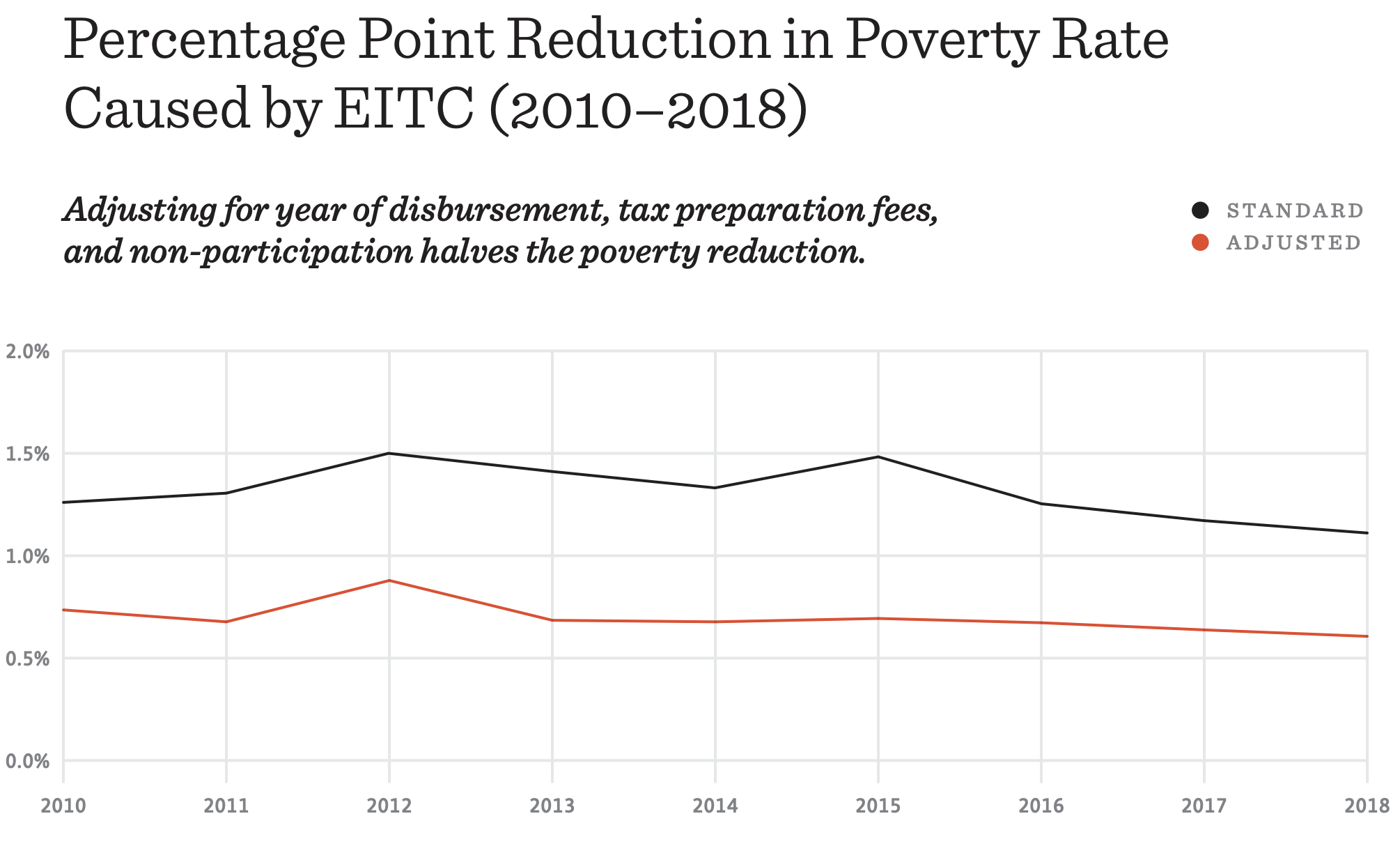 This finding is consistent with a Census study published last year that linked IRS administrative data to ASEC data to determine the degree to which the ASEC data overstates the poverty reduction. That study found that the poverty reduced by the EITC is around 33 percent lower when using the IRS administrative data as compared to using the ASEC imputations. 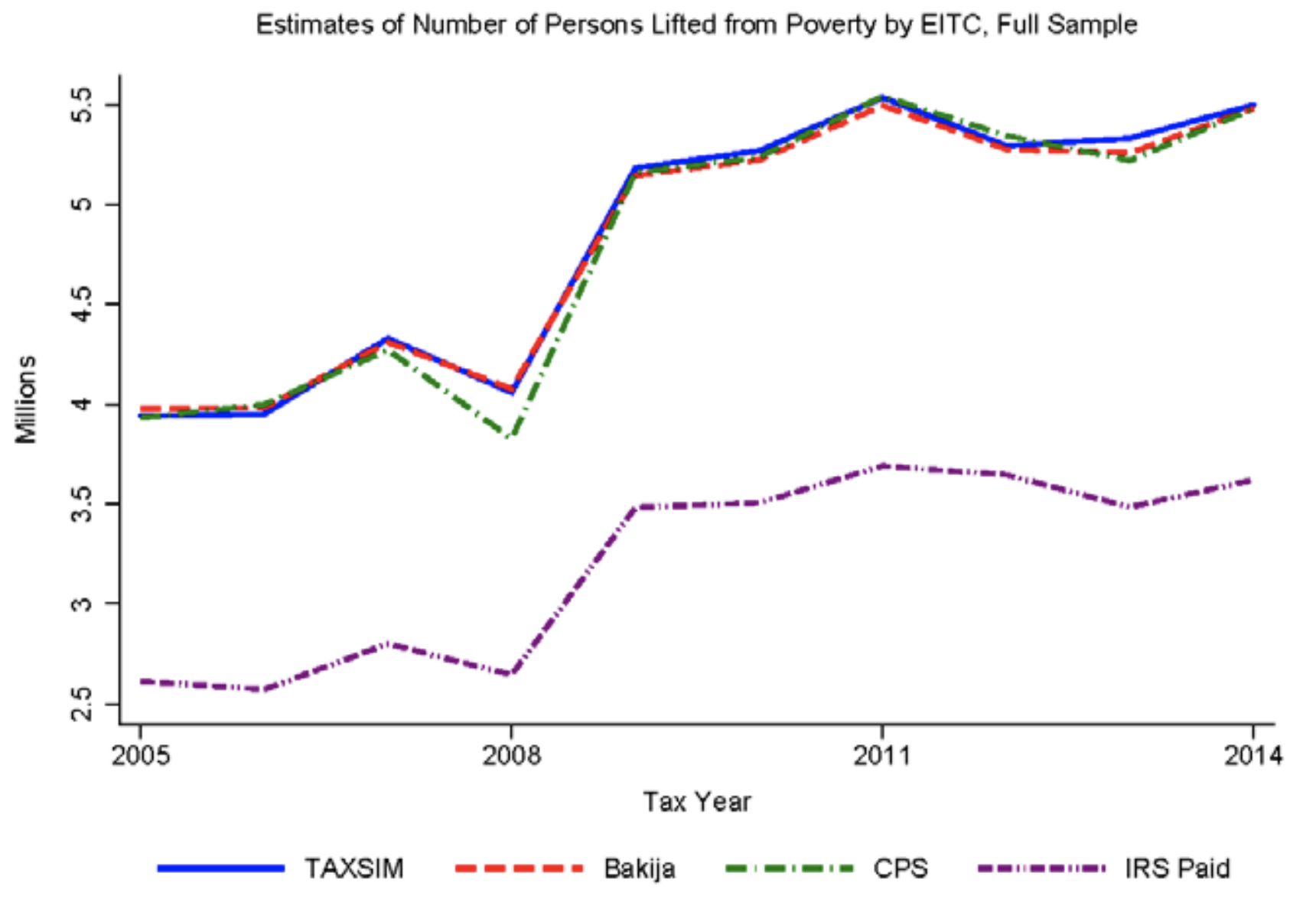 However that study only addressed the Nonparticipation Problem. It did not address the Wrong Year Problem or the Tax Preparation Fee Problem. Had it done so, it would have probably reached the same conclusion I have here, which is that the antipoverty impact of the EITC is about half of what is typically reported.

Including the private administrative costs reveals that around 11 percent of EITC money goes to administration, making it one of the least efficient welfare programs in the country.

EITC Does Not Increase Work

EITC benefits phase in based on earnings, meaning that the more labor income you earn, the more EITC benefit you receive up to a certain point.

This phase-in structure incentivizes people to work more, which is supposed to be one of the main appeals of the EITC. But it does not appear that these work incentives actually result in more work being done. Researchers have gone back and forth on this question over the years, but the most convincing study on the topic, which was recently published by Henrik Kleven, shows that EITC does not increase employment or labor force participation.

In his study, Kleven analyzed 27 state-level EITC expansions and all five federal EITC expansions. Using a synthetic control approach, Kleven found that none of the state-level expansions had any effect on employment. Kleven also found that only one of the five federal expansions—the 1993 EITC reform—is associated with any increase in the labor force participation of the single-mother target population. But that EITC reform coincided with new state-level eligibility restrictions for Aid to Families with Dependent Children and a booming macroeconomy. When those confounding factors are taken into account, Kleven shows the 1993 EITC reform also had no effect on labor force participation.

Kleven’s explanation for why there is no demonstrated increase in work is that the EITC benefit is so complicated and obscured that most potential beneficiaries do not realize it exists or do not understand how it works. This explanation is backed up by surveys of individuals showing precisely this.

Beyond Kleven’s demonstrations, it is also worth noting for policymakers that, even if someone believed the EITC increased work in the past, there is no reason to believe that future expansions will continue to have that effect without limit. And, of course, when the economy is demand-constrained, meaning there are more jobseekers than job openings, the EITC cannot increase the amount of work that is being done, only change its composition.

The case for the EITC, which has hardened into a near-consensus in the left-of-center DC policy community, is largely built on myths and mismeasurements. The EITC has not historically increased employment or labor force participation and there is even less reason to believe that further EITC expansions from our current point would do so. The EITC is not an especially efficient program. In fact, it is among the least efficient welfare programs in the country once its unique private administrative costs are counted. Finally, the standard measurements of how much the EITC reduces headcount poverty are significantly inflated because those measures use EITC benefits from the wrong year, overstate program participation, and understate administrative costs.

The best way to expand the US welfare state going forward is not to enact more EITC-like measures, but to instead use more efficient and more effective universal programs.