When policy commentators talk about the Nordic economies, they tend to focus on their comprehensive welfare states. And for good reason. Denmark, Finland, Norway, and Sweden are home to some of the most generous welfare systems in the world. Each has an efficient single-payer health care system, free college, long parental leave, heavily subsidized child care, and many other social benefits too numerous to list here. 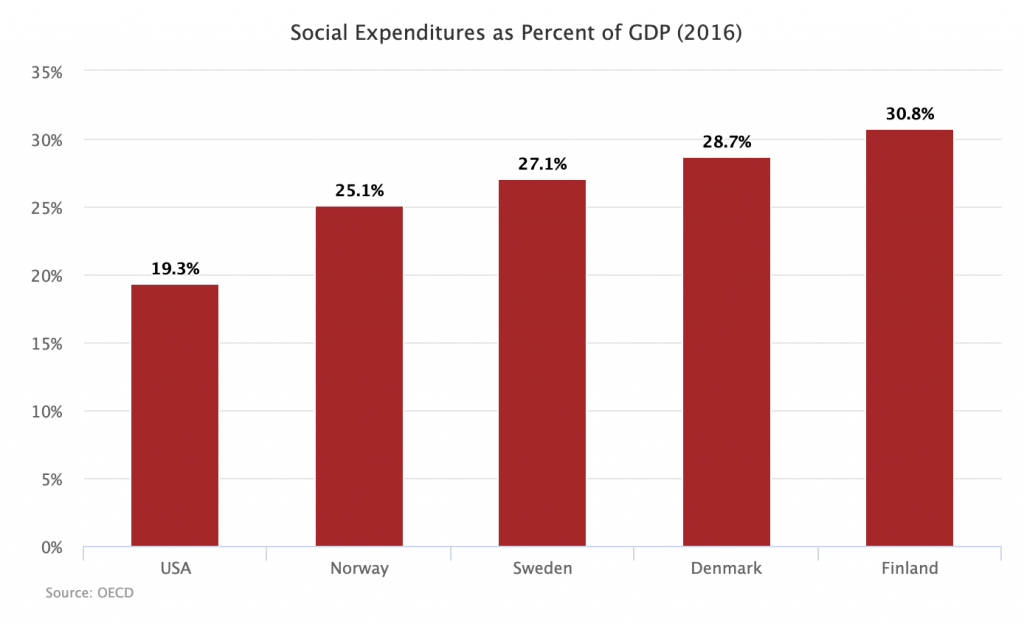 As marvelous as the Nordic welfare states are, the outsized attention they receive can sometimes lead commentators to the wrong conclusions about the peculiarities of Nordic economies. Jonathan Chait thinks the Nordic economies feature an “amped-up version of … neoliberalism” while an oddly large number of conservative and libertarian writers claim the Nordics are quasi-libertarian.

The common thread to these mistaken conclusions, aside from the desire to deny that there are leftist success stories in the world, is the apparent belief that the only extraordinary part of Nordic economies are the welfare states. Except for their generous social benefits, everything else is properly capitalist and even more capitalist than the United States. Or so the argument goes.

Labor Market
But this is not true. In addition to their large welfare states and high tax levels, Nordic economies are also home to large public sectors, strong job protections, and labor markets governed by centralized union contracts.

Around 1 in 3 workers in Denmark and Norway are employed by the government. 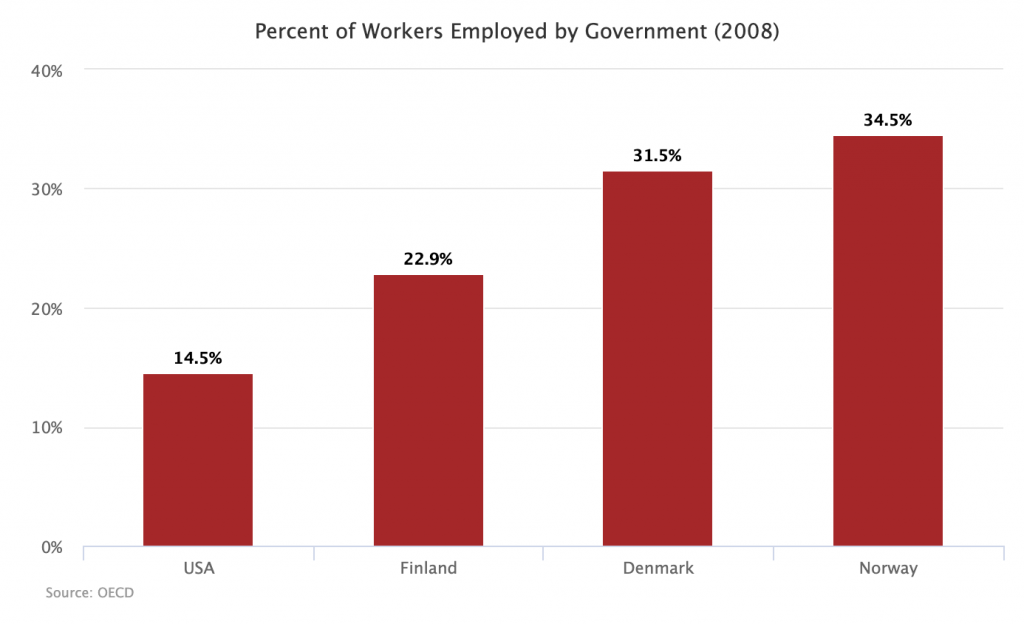 Protections against termination by employers are much stronger in the Nordic countries. 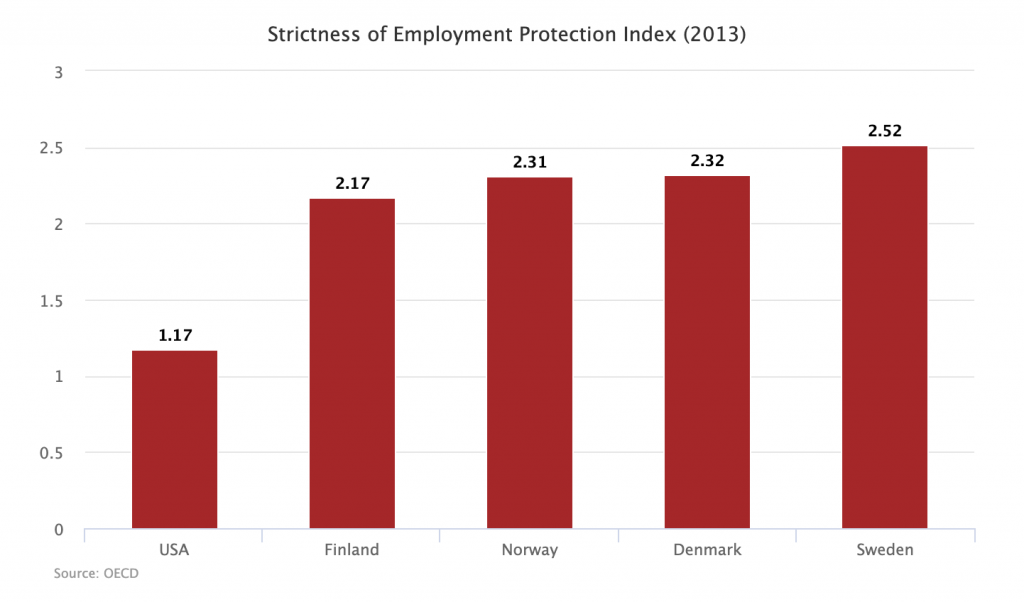 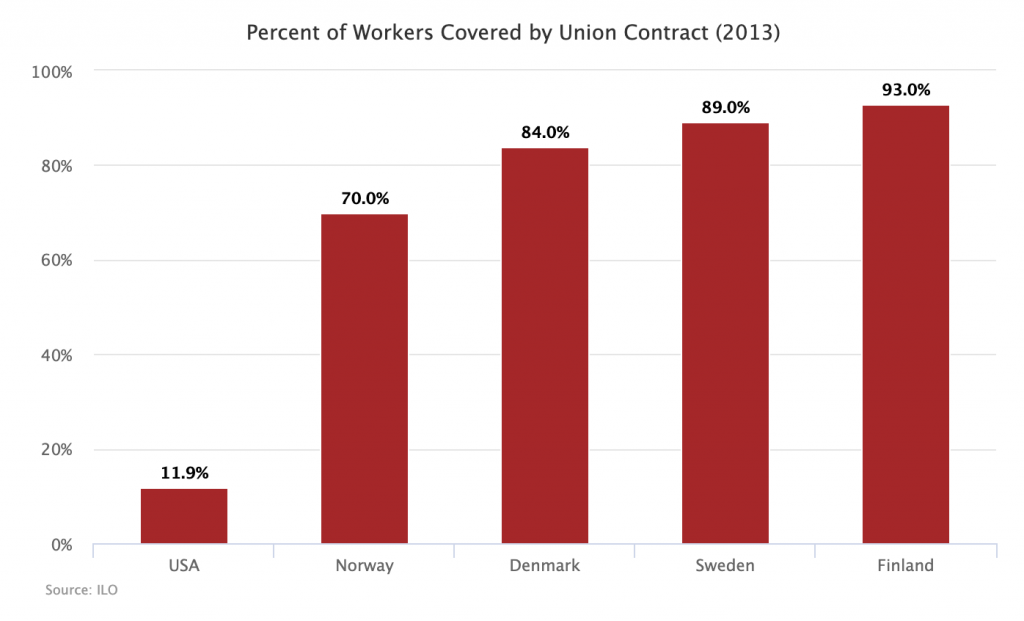 These labor market characteristics are hardly neoliberal or quasi-libertarian, at least if we stick to typical definitions of those terms. The neoliberal tendency, as exemplified most recently by France’s Emmanuel Macron, is to cut public sector jobs, reduce job protections, and push for local rather than centralized labor agreements. For the US labor market to become more like the Nordics, it would have to move in the opposite direction on all of those fronts.

State Ownership
Even more interesting than Nordic labor market institutions is Nordic state ownership. Collective ownership over capital is the hallmark of that old-school socialism that is supposed to have been entirely discredited. And yet, such public ownership figures prominently in present-day Norway and Finland and has had a role in the other two Nordic countries as well, especially in Sweden where the government embarked upon a now-defunct plan to socialize the whole of Swedish industry into wage-earner funds just a few decades ago.

The governments of Norway and Finland own financial assets equal to 330 percent and 130 percent of each country’s respective GDP. In the US, the same figure is just 26 percent. 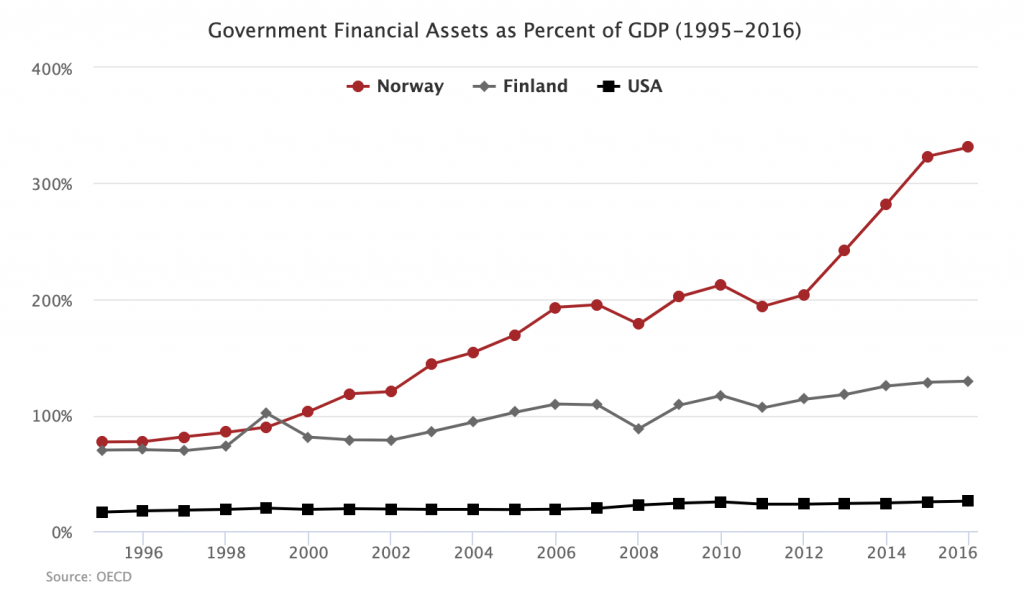 Much of this money is tied up in diversified wealth funds, which some would object to as not counting as real state ownership. I disagree with the claim that wealth funds are not really state ownership, but the observation that Nordic countries feature high levels of state ownership does not turn upon this quibble.

State-owned enterprises (SOEs), defined as commercial enterprises in which the state has a controlling stake or large minority stake, are also far more prevalent in the Nordic countries. In 2012, the value of Norwegian SOEs was equal to 87.9 percent of the country’s GDP. For Finland, that figure was 52.3 percent. In the US, it was not even 1 percent. 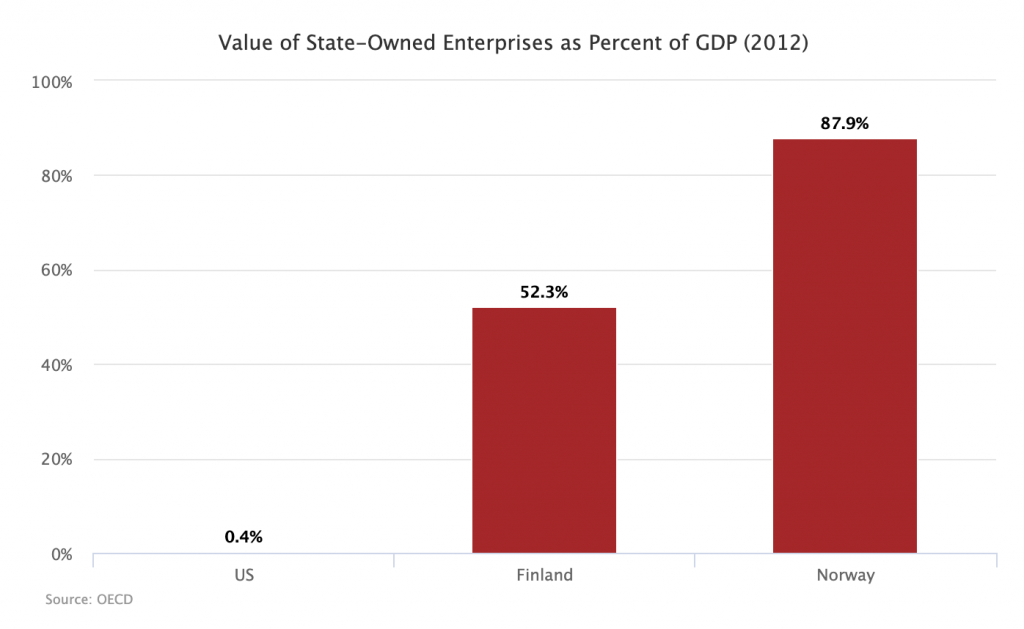 Some of these SOEs are businesses often run by states: a postal service, a public broadcasting channel, an Alcohol retail monopoly. But others are just normal businesses typically associated with the private sector.

In Finland, where I know the situation the best, there are 64 state-owned enterprises, including one called Solidium that operates as a holding company for the government’s minority stake in 13 of the companies.

Finland and Norway have their special reasons for the level of state ownership they engage in. Finnish government publications discuss the country’s late development and status as a peripheral country when justifying their relatively heavy public involvement in industry. That is, Finland does not want to expose the entirety of its marginal, late-developing, open economy to the potential ravages of international capital flows.

In Norway, the discovery of oil in the North Sea was the impetus for the creation of its enormous social wealth fund. The fund currently owns around $950 billion of assets throughout the world, including more than $325 billion of assets inside the US. In a video on the Norwegian central bank’s website, the fund is described as follows: “It is the people’s money, owned by everyone, divided equally and for generations to come.”

No one would argue that the Nordic countries are full-blown socialist countries, whatever that might mean. But it is also folly to pretend the only thing they have proven is that high taxes and large welfare states can work. Even on the narrow understanding of socialism as public ownership of enterprise, the Nordic countries are far more socialistic than most commentators seem to realize. American socialists who draw inspiration from their successes do so rightly.