The Success Sequence is back! The ad-hoc anti-poverty process first endorsed by Isabell Sawhill and Ron Haskins at the Brookings Institute has been picked up by Brad Wilcox and Wendy Wang at AEI. George Will also recently mailed in a column on the topic by doing a rewrite of the AEI product. I’ve written before about some of the problems with this particular framework, but in light of this new push, it is worth rehashing them here.

The Curious Case of the Different Success Sequences
If you are a long-time observer of the Success Sequence community (like I am), you may have noticed something a little strange about it. Though everyone in this community claims they are interested in the same anti-poverty process, in reality, each publication defines the Success Sequence somewhat differently. And those differences tell you a lot about what actually motivates the folks who push this concept.

For Sawhill and Haskins, the Success Sequence consists of the following five rules (they express them as three rules, but their third rule is a compound rule that I prefer to break up):

Rules four and five, the delay-marriage and delay-parenting rules, are gone! What happened to them? How could such an oversight have been made?

The answer is pretty obvious. Wilcox dropped the delay-marriage and delay-parenting rules because they do not mesh with his particular conservative worldview. His cultural and religious commitments make him uncomfortable advocating for the delay of marriage and childbirth. So he doesn’t.

Sawhill and Haskins have no similar compunction. In fact, Sawhill so loves delaying childbirth that she has spent the last few years of her professional life advocating that we fight poverty by giving poor women free IUDs so that they don’t have poor children, a borderline-eugenic proposal that oddly attracted praise from some prominent liberals.

This discrepancy between Haskins/Sawhill and Wilcox/Wang reveals that many of the rules of the Success Sequence are just the tacked-on cultural preferences of the authors. The rules to delay marriage and parenting after age 21 do not really do anything to cut down on poverty, which is why Wilcox can easily drop them and still arrive at a low-poverty rate for Success Sequence followers.

But the delay rules do not actually cut down poverty because none of the rules provide meaningful poverty reduction after you have applied the full-time work rule. The authors in the Success Sequence community smuggle their cultural views into the anti-poverty debate by embedding them into a sequence with full-time work, which drives nearly all of the low-poverty outcomes that they find. When their superfluous cultural preferences collide with one another, they end up coming up with different Success Sequences.

Trying to promote your cultural views as the panacea to poverty is a smart strategic move. It brings attention to your cause in excess of what it would otherwise get. Just look at the education reform folks who have been doing the same thing for decades. But one does have to wonder how a teenager reading this literature will be able to figure out which set of competing cultural preferences swirling around in the Success Sequence community constitutes the One True Success Sequence.

Work Does All of the Work
I noted this briefly in the prior section, but it deserves further explanation. You can demonstrate (as I have) that full-time work is responsible for the low-poverty results of the various Success Sequences. But you don’t even need to do that. It’s perfectly obvious if you just think about it for a second.

A full-time worker who is paid the $7.25 minimum wage has an annual income of $15,080. If they live alone, the poverty line for their one-person family is $12,486. Since $15,080 is greater than $12,486, no full-time worker who lives alone is in poverty, at least as poverty is measured in the official statistics. What this means is: a person can only be in poverty (1) if they do not work full time or (2) if they live with other people who do not work full time.

If the Success Sequence was not just a vehicle for litigating cultural beefs, what it would really say is that individuals wanting to minimize their risk of poverty should work full time and live alone. Or, if individuals insist on living with others, they should only live with other full-time workers, such as in a double-income-no-kid (DINK) arrangement. Stay away from children, individuals with a work-limiting disability, elderly people, students, unpaid family carers, and those prone to joblessness. If you keep these types of people out of your household and make sure you work full time, you will never be in poverty. That’s the truth.

Despite what the Success Sequence says, marriage does not help you except insofar as marrying adds another full-time worker to the family. If it does not do that because the person you are marrying has a disability or some other work limitation, then marriage will actually increase your risk of poverty.

A high school degree does not do much for you either. It might help you get a higher wage, but minimum wage keeps you out of poverty anyways. A minimum wage could leave you in poverty if you have dependents you are caring for (such as children), and in those cases a higher wage driven by a high school degree might pull you out of poverty. But if you have found yourself in a household with dependents, you are already ignoring the most correct wisdom about staying out of poverty, which is to never live with non-workers.

To be clear, I am not actually saying people should pursue a life where they either live alone or only with other full-time workers. My personal view here is that our economic institutions, and especially our welfare state, should be designed to ensure that nobody is in poverty and that people can form the families they would like. But in our current economic system, it is the no-dependent lifestyle described above that actually minimizes your risk of poverty, not the lifestyle envisioned by the Success Sequence.

What About the System?
Success Sequence writing, like so much other writing on poverty, proceeds by cherry-picking some characteristics that are more prevalent among those in poverty and then identifying those characteristics as the “causes” of poverty. In the case of the Success Sequence, the causes are low work activity, low education, no marriage, or insufficient delaying of childbirth and marriage. But it could be anything. Find some variable, do a regression, and you have finally proved where poverty comes from.

The problem with this type of theorizing is that it ignores the role of the system. Any given cause you identify can only result in poverty if the economic system allows it to do so. Thus, in all cases, the way we have set up the economic system to distribute income in society is a necessary cause of any observed poverty.

This might seem like a cute point, but it is not. Few would quibble with it if we were debating health uninsurance rather than poverty. Just like with poverty, you can find all sorts of things that are correlated with high rates of health uninsurance, including low work activity, low education, and so on. But if someone were to say something like “single motherhood is responsible for health uninsurance,” the most obvious response would be “only in America.” Not in Canada, where everyone has insurance. Not in the UK, where everyone has insurance. Not anywhere in the developed world where universal health care is the norm.

Just as we can set up our system to ensure nobody is without health insurance, we can also set it up to insure that nobody has an income level below the poverty line, if we want to.

The Garbage Generation?
As a final note, I think it would be fun to ask ourselves how many people have followed the Success Sequence throughout history. If this really is a standalone indicator of virtue, rather than a contemporary backfilled set of cultural grievances calibrated to blame the poor for their plight, then surely it will have some sort of universal applicability. At minimum, surely it would describe the typical behavior of people in our own country just a few decades ago, right?

Remember the first prong of the Success Sequence is to graduate high school. In 1940, three-fourths of adults aged 25 and over lacked a high school degree. Even as late as 1966, the majority of adults had no such degree. Was the Greatest Generation really the Garbage Generation? 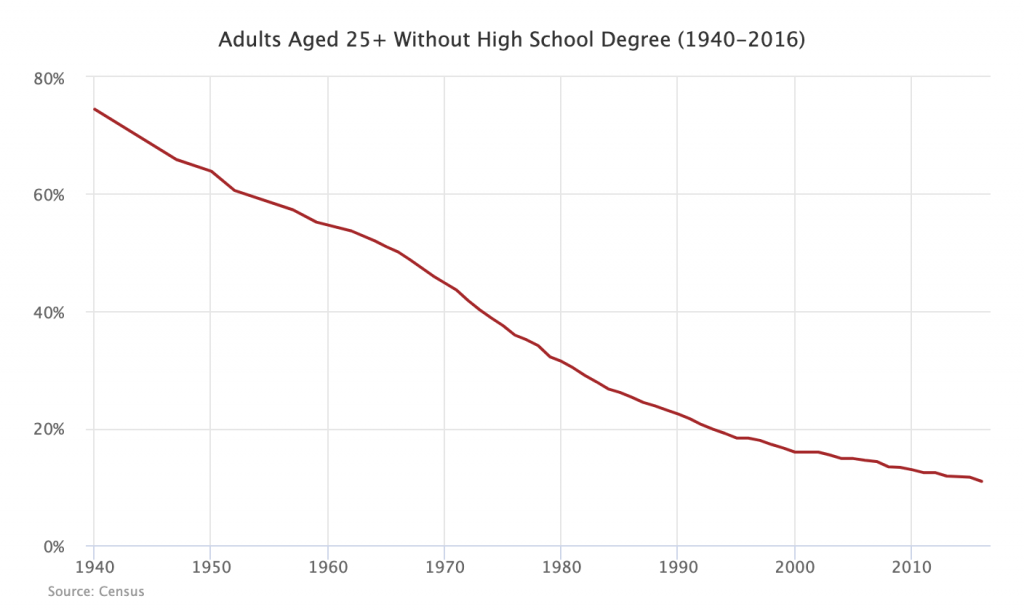 Young parenting, discouraged by Sawhill/Haskins but not Wilcox/Wang, was also far more prevalent in the past than now. The CDC data only goes back to 1970, but in that year, the mean age of first birth was 21.4. This means that nearly half of the women in that period were violating the delay-childbirth rule. 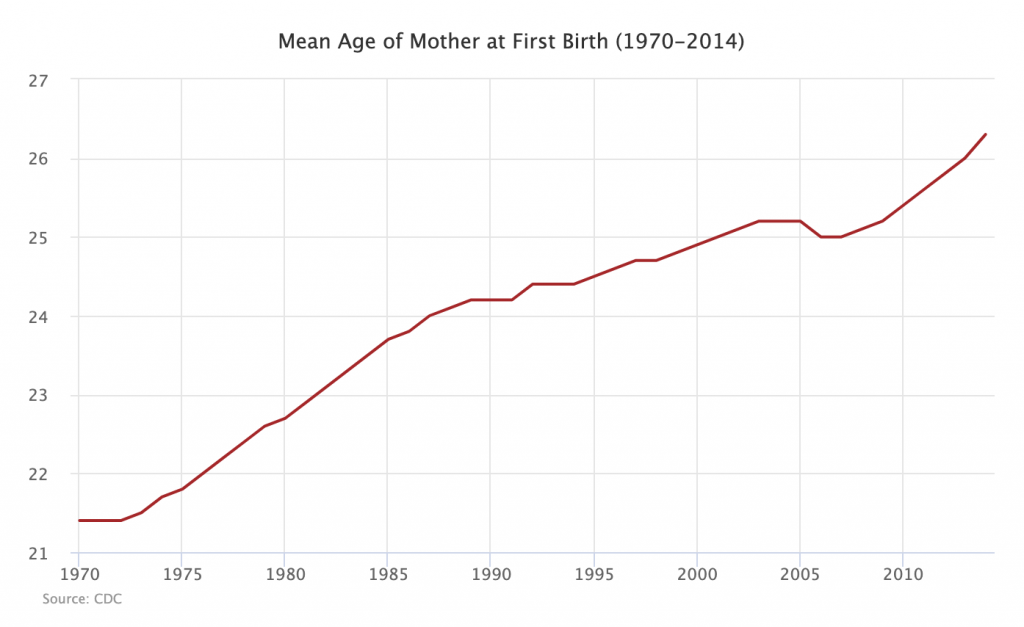 One might respond to this point by saying those were different times. That was then. This is now. But this is precisely my point. What we have in the Success Sequence is not some kind of time-immemorial wisdom about how to live a virtuous life. Indeed, if the Success Sequence were applied backward in time, it would conclude that almost everyone who has ever lived in the world is an immoral wreck.

Fifty years from now, conservatives will write op-eds saying the real trick to staying out of poverty is a college degree, cohabitation, and delaying child birth to age 30. No Success Sequence will stay around if it stops describing most middle class lives or if it begins to describe too many poor lives. The goalposts will shift constantly but the conclusion will always remain the same: the poor did this to themselves and the rich should be spared from higher taxes.