I spent a considerable amount of time in the run up to the release of the 2016 Survey of Consumer Finances thinking about how best to represent the overall racial wealth gap in a single illustration. The usual approaches and many other conceivable approaches have issues that have long bugged me.

The problem here is that if you compare them only by finding the absolute difference between the three races at each percentile, you end up with a visualization that looks mostly like a flat line hovering around zero up until you get into the higher percentiles. This is because of how much wealth is skewed towards the top of society. If you compare each percentile by dividing black and Latino wealth by white wealth at each percentile, you run into the problem of negative values creating screwy results in and around the bottom of the wealth distribution.

In an attempt to come up with a visualization that solves all these issues, I settled on the graph below, inspired by the way Branko Milanovic often likes to represent income inequality between countries. The graph might be somewhat bewildering at first glance (a negative no doubt), but it is not too difficult to explain. 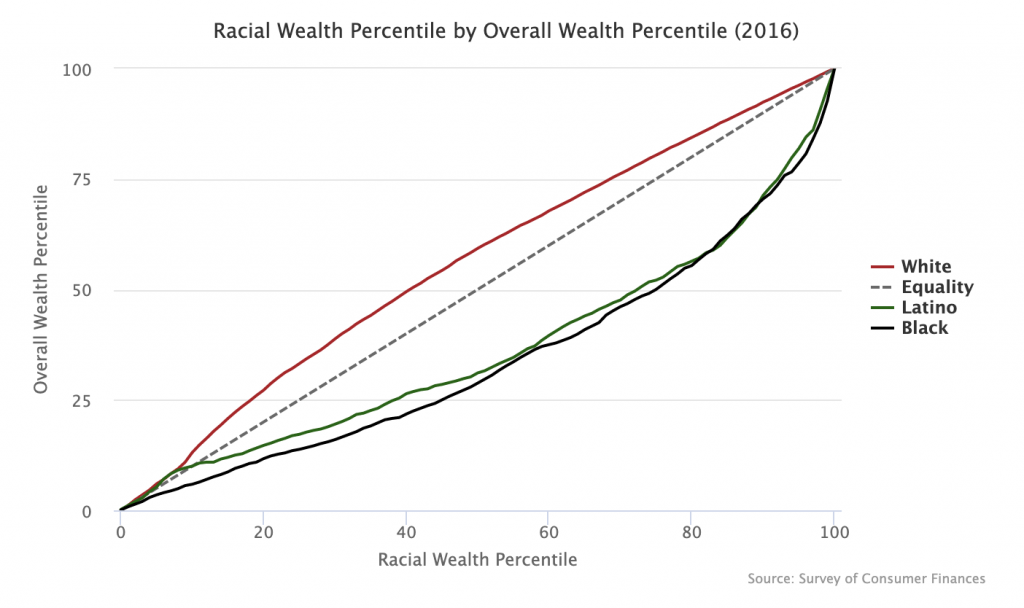 If you hover your cursor over the 50th percentile, you see the following values:

Although I think this visualization is better than most others you see, it too has at least one issue. Near the top of the wealth distribution, each race’s line tends to converge back to the line of equality. This is because, even though there are large differences in wealth magnitudes in the top percentiles of each racial group, there are not large differences in rank order. Put another way, the 99th percentile black and Latino families have far less wealth than the 99th percentile white families, but they are still close behind 99th percentile white families in the wealth order.

That issue notwithstanding, if you had to represent the whole racial wealth gap in one illustration, I think this is the best way to do it.