The idea of reparations for black people has attracted a considerable amount of attention in the last few years, especially after Ta-Nehisi Coates gave it a boost in 2014. No other think tank will touch the issue with a ten foot pole. So I figured it would be a great topic for People’s Policy Project to tackle as part of our general philosophy of filling progressive policy gaps.

To get the ball rolling, it seemed natural to play around with wealth survey data to see what reparations might look like in aggregate. When you start doing that, however, you run immediately into an odd problem created by the way that wealth is generally distributed throughout society.

Because wealth is distributed very unevenly within every racial group, any race-specific wealth transfer regime will either 1) open up massive racial wealth disparities going in the opposite direction of current disparities or 2) provide the vast majority of its benefits to the upper class.

The only way to avoid one of those two unsavory outcomes is to ensure any wealth transfer regime tackles both class and race inequality at the same time, as discussed below.

The simplest form of reparations would be to transfer enough wealth from white families to black families such that the wealth gap between the two groups was eliminated. 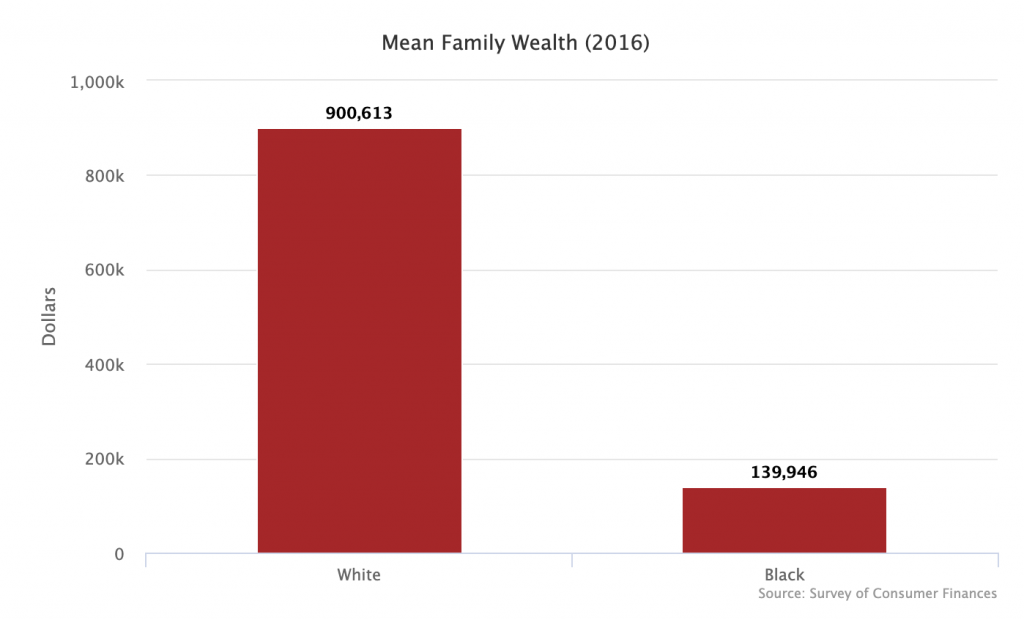 Closing the gap between those two groups would require that around $12.3 trillion of wealth be transferred from white families to black families. After such a transfer was enacted, black mean wealth would rise by around $617,000 while white mean would would fall by around $144,000, leaving both racial groups with a new mean wealth of $757,000. 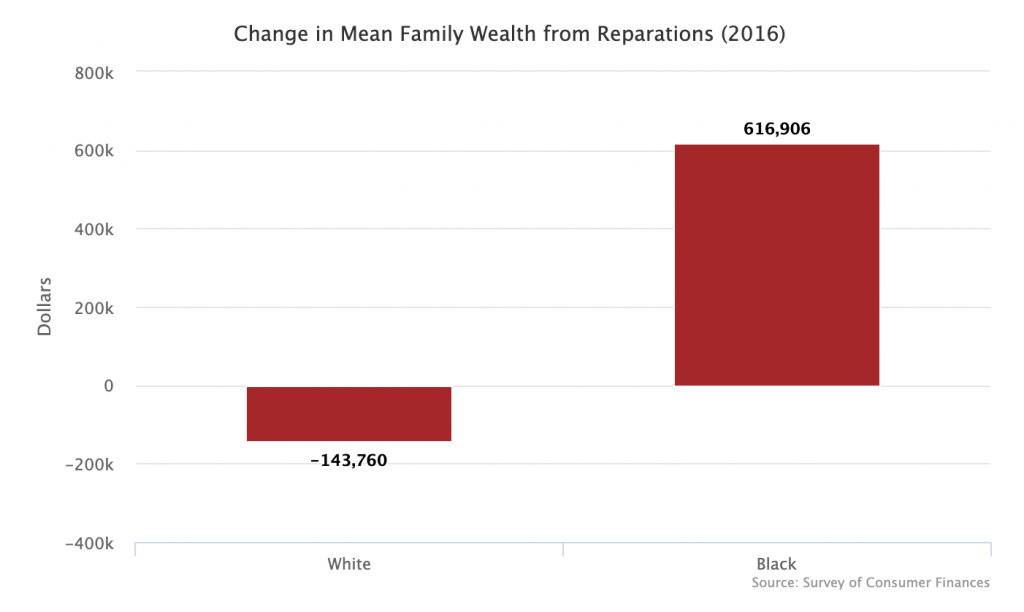 Of course, it would be impossible to snag $144,000 from every white family as 47 percent of white families have net worths below $144,000 and, even for those with net worths somewhat above that number, you probably would not want to nearly wipe them out in this process.

Most white wealth is held by a small percentage of families at the top of society and so, naturally, that is where you would need to get the money. White millionaires own around 82 percent of all white wealth, and so for these purposes, we could imagine getting the money only from them.

In the 2016 Survey of Consumer Finances, white millionaires collectively own around $63 trillion. The $12.3 trillion reparations bill would thus be around 19.5 percent of white millionaire wealth. A one-time 20 percent millionaire tax might seem like a bit of steep bill, but given that the average return on capital is 5 percent per year, the transfer would be equal to around 4 years of investment return on white millionaire money.

I am not saying that a 20 percent tax like that is the best way to do something like this, nor am I saying it would be without practical and legal problems. But for getting the ball rolling and allowing me to get to the real puzzle below, it is good enough for this exercise.

The problem arises when you start thinking about how you would distribute this $12.3 trillion to black families.

The most obvious way to do it would be through a flat payment of $617,000 to each black family. This sort of flat payment is what most people seem to have in mind when they first start thinking about reparations. However, because white wealth is so unevenly distributed among white people, such a flat payment would open up massive new gaps between white and black families.

To see what I mean consider the below graph. 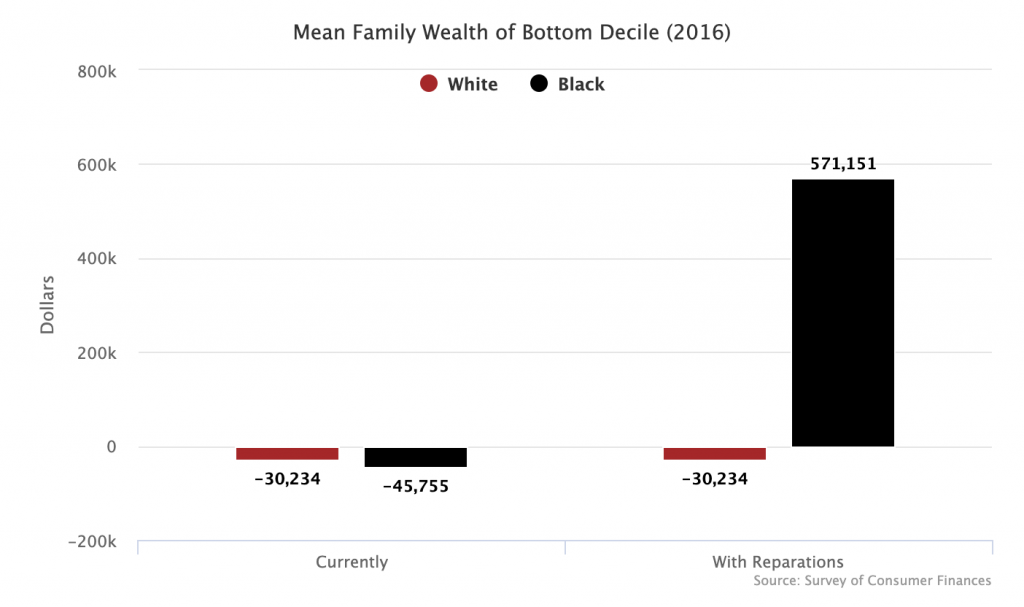 A similar situation would exist for median families as well. 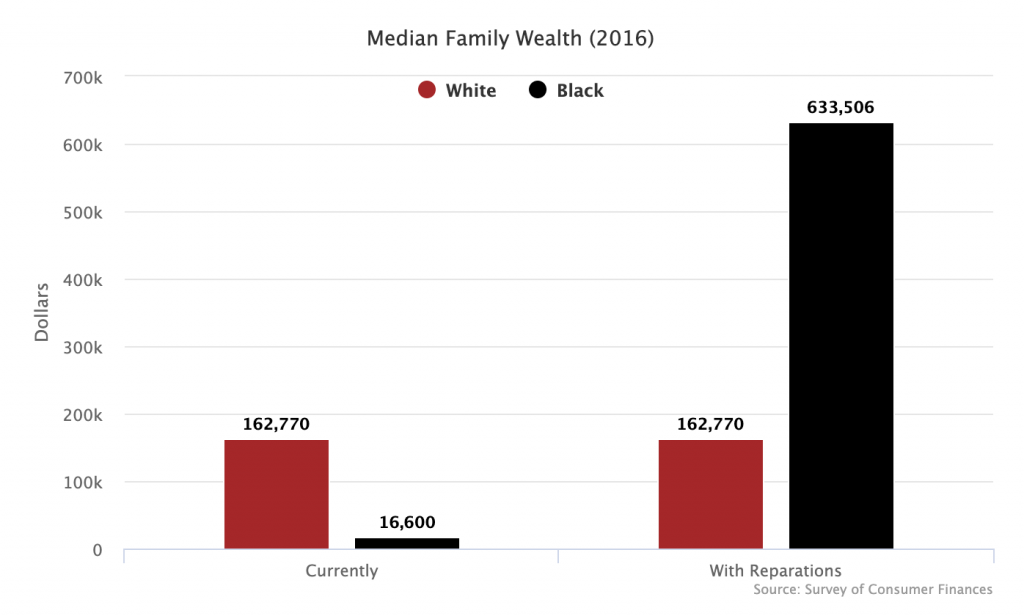 To get a full picture of how strange the resulting racial wealth distribution would be, consider the following graph, which is complicated on first glance but easy to explain. 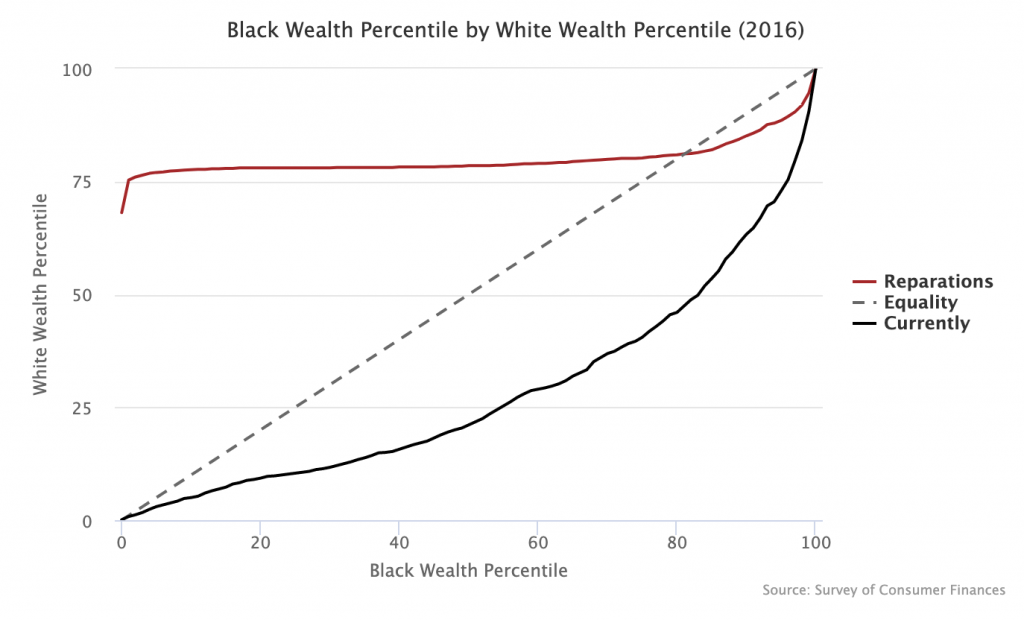 The gap between the black line and the grey dotted line shows you the current racial wealth gap in ordinal terms. As you can see, white wealth (indicated by the dotted line) is far higher than black wealth through most of the wealth distribution.

The gap between the red line and the grey dotted line shows you what the racial wealth gap would be after reparations in ordinal terms. There, you can see black wealth is far higher than white wealth until you get up into the higher percentiles. So, broadly speaking, this kind of reparations just ends up recreating racial wealth disparity, but in the opposite direction.

After reparations of this sort, the poorest black family would be wealthier than two-thirds of white families. This would be a very bizarre and inegalitarian state of affairs. It also would be odd to suppose that, but for slavery, Jim Crow, and discrimination, there would be no black family in the bottom two-thirds of society and that all black families would otherwise be in the upper middle class or better.

The problem with this approach is that, because of the reality of intrarace inequality, the vast majority of the $12.3 trillion would be paid out to the black upper class.

Any effort to do race-only reparations will wind up running into one of these two bizarre outcomes. Race-based reparations implemented with flat payments would end up creating massive racial wealth disparities that are even larger than current race disparities in the bottom half of the wealth distribution. Race-based reparations implemented with graduated payments would end up delivering the vast majority of reparation money to the black upper class and almost none to the black lower class.

There is no way out of this double-bind except to combine race and class based leveling together.