Critics argue that single payer has a unique problem in that it would remove people from employer-provided health plans.

A far more important consideration is minimizing disruption to the 156 million people who currently get insurance through their employers, and are largely satisfied with their coverage. Moving to single payer would mean taking away this coverage and imposing new taxes.

First, most people who have employer-based coverage like it and don’t want to change.

Amid the many complications of Medicare for All, the question of what would happen to the 157 million Americans who get their insurance from their employers and the 19 million who are enrolled in Medicare Advantage loom large.

One remarkable aspect of this particular criticism (which I am going to call the “switching pain” criticism) is that it never seems to be fleshed out beyond a few sentences. I do not know why exactly this is. But one reason might be because, when you do so, the argument becomes totally indefensible.

In our current healthcare system, virtually all workers are forced to switch away from an employer plan onto the public Medicare plan around age 65. Moving to a single payer plan would thus cause two offsetting outcomes:

Additionally, calling it “switching pain” is probably not even right. I adopt that term because that is how the critics describe it. But, as Zaid Jilani recently reported, we switch around 10,000 people onto Medicare every day as they turn 65 and those who go through the process seem pretty happy about it. It’s not switching pain. It’s switching pleasure. 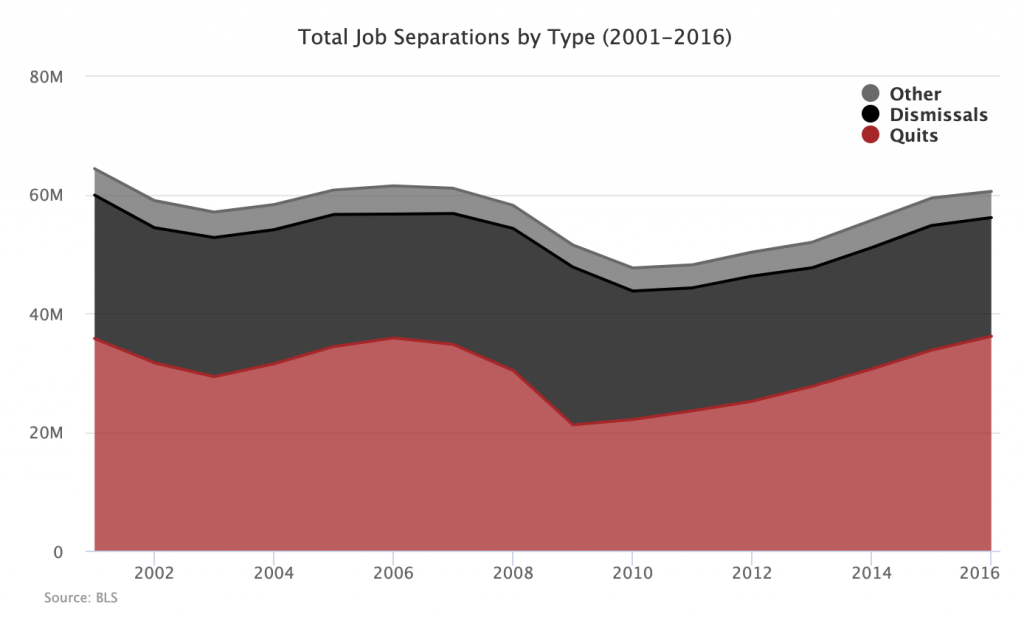 The above graph shows how many people lose their job in a given year, but what about how many jobs a given individual has over the course of their career? A longitudinal study conducted by the BLS showed that people held an average of 11.9 different jobs between ages 18 and 50. Once again, we do not know how many of those 11.9 jobs had employer-sponsored health care, but even if we assume only half did, that means that individuals suffer the pain of switching health care at least six times in their working career.

In addition to forcing people to switch every time they separate from a job, the current system also requires them to switch (or consider switching) every year that they are in a job. The only way the health insurance market works as a market is if, at open enrollment each year, workers reassess their options and switch to whatever plan is best.

Of course, in most cases, it is not workers who are tasked with the decision of whether to switch to a new insurance plan. It is their employers who, if they are behaving in the way the market requires, must go out each year and see if there are better insurance plans on offer. If the employer finds a better plan, then the employer will forcibly switch all of their employees to it.

Thus, even if you stay on with the same job, you are constantly at risk of being forcibly moved to another health plan.

Critics of single payer like to cite (or mention in passing without citing) surveys showing that people are generally satisfied with their employer-provided health insurance. There are two problems with this. 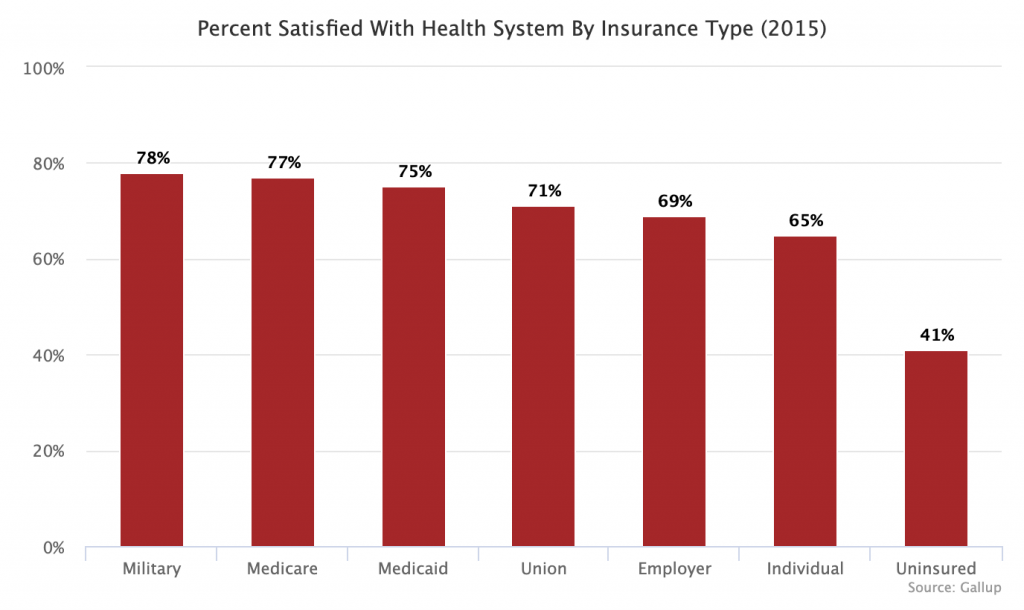 People on military or veteran’s health care, which is a full-blown UK-style system, are the most satisfied. They are followed closely in satisfaction by those on our major public health programs, Medicare and Medicaid.

Second, asking everyone if they are satisfied with the health system or their health insurance is not a good way to assess how much people actually like the insurance they have. Health insurance is insurance, meaning that some people get a lot of benefits paid out from it while most get very little, at least at a given point in time. Those who do not currently need a bunch of medical care have no idea how good their insurance is because they rarely use it.

If you asked me how I like my car insurance, life insurance, and renter’s insurance, I guess I would say “they are great, the companies never bother me.” But insofar as I’ve never made a claim on any of those policies, the real answer is “I have no idea.”

Those who do not currently use the system will of course be satisfied. But when they have an accident and get hit with a budget-busting deductible, they’ll probably reconsider. In short, the whole premise of this metric is wrong.

After you have demonstrated that the switching pain argument is wrong on the merits, critics will typically retreat to some kind of political argument about how the objective incorrectness of the point will not solve the political difficulty of it. You see this move in a lot of single payer stuff. For instance, critics will say it involves a big tax hike and then you’ll respond that the taxes will just replace private premiums and then they go “but that’s not how it will be interpreted.”

In reality, nobody knows how it will be interpreted and the conventional wisdom of the political class (which is itself often constructed in self-delusional ways) has not had a great track record recently. These political arguments proceed as if the Democratic establishment is completely incapable of persuasion and framing and as if the Republican establishment is going to say things about single payer that it hasn’t already said about every health care proposal favored by liberals. If liberals can pass a plan that Republicans say is socialized medicine run by bureaucrats who can decide to kill you when they want, why can’t they do it again?

Finally, in recent surveys, most people say they want a single payer system and, however ignorant you think poll respondents are, it seems clear from the questions asked that they at least know they would not be on their employer’s insurance anymore. If you want a “hard” indicator of where people are on this politically, actually asking them that question seems to be a more direct way of getting an answer than indirectly reading the tea leaves of health care satisfaction surveys.

This is the fourth post in our Single Payer Myths series. The series tackles common arguments against a single payer system one at a time.