When I first read reviews of Nima Sanandaji’s “Debunking Utopia: Exposing the Myth of Nordic Socialism” a couple of years ago, I found most of the reported claims of the book fairly uninteresting. For instance, Sanandaji claims that Nordic longevity is partially caused by healthy lifestyles not just high-quality public health care, which Sanandaji nonetheless thinks is a good idea (“I am myself in favor of the public sector providing health care.”). Characterizing this point as “debunking” seems a bit much insofar as I’ve never seen anyone argue that the presence of public health care is the sole determinant of lifespans.

After wading through uninteresting tidbits like this and the vague handwaving that is typical of this genre (homogeneity, egalitarian culture, etc.), Sanandaji does end up making one very interesting claim that he relies upon throughout the book and which is the central point of most of the reviews I have read: Nordic equality precedes the welfare state and (implicitly) has little to do with it.

Yes, it is true that Nordic people have low levels of poverty. And certainly, to some degree we can explain this by the aid given to the less fortunate by the public sector. However, researchers have convincingly shown that Nordic countries moved towards income equality in a time when they combined small public sectors and low taxes with free markets.

Certainly, by distributing incomes and providing services such as universal health care, the welfare states do contribute to more equal incomes. Much like long life spans and low child mortality, however, even income distribution evolved in the Nordics before the transition to large welfare states.

Despite making this claim over and over again, Sanandaji does not actually provide evidence that backs it up. Worse than that, the evidence he does cite, which is only about the pretax incomes of the top 10 percent, appears to suggest that the best way to hold down the pretax income of the top 10 percent is through a massive expropriation event, followed by high taxes and public ownership of wealth. He says nothing about this in his book and, being a libertarian of sorts, presumably does not support these ideas.

Despite reviewers writing that “Sanandaji is systematic and innovative in the use of historical and empirical data in explanation of the Nordic experience,” all he really does on this key point is cite to two papers that he does not describe in any detail. The papers are “The long-run history of income inequality in Denmark: Top incomes from 1870 to 2010” by Atkinson and Søgaard and “The Evolution of Top Incomes in an Egalitarian Society; Sweden, 1903-2004” by Roine and Waldenström.

Beyond these particular problems, Sanandaji also continually conflates the claim that 1) inequality was already low before the welfare state with the claim that 2) the Nordic countries have always been fairly equal, going as far as to quote his own brother saying that the Nordics never had “full-scale feudalism” in support of the latter claim. But the studies he cites, which again don’t measure the welfare state, actually show that pretax top incomes used to be extremely high in these countries, but that they came down at lot in the first half of the last century (i.e. during the Great Depression, World Wars).

Measuring incomes right after the early-century top-income collapse (which happened in basically every country) and before the mid-century welfare state buildup in order to suggest the countries are just generally egalitarian is kind of silly. If anything, the more plausible story of such a trend is that the welfare state locked in the one-off income collapses caused by the events in the early 20th century by imposing high taxes that prevented the rich from reaccumulating the wealth that they lost. Indeed, this is the theory offered in the Swedish paper (below).

It is hard to know whether Sanandaji is being intentionally deceptive in citing these studies in support of some of the claims he makes or if he genuinely does not understand how they work. He does not discuss the studies at all except to quote from the abstract of one of them.

The Lessons From Sweden

Although the Danish study is limited by sparse data and a shifting income concept, the Swedish study is surprisingly robust. Old Swedish tax data distinguishes between labor income and capital income and it is even possible to determine how much wealth those with top incomes owned over time. This sort of information allows for a more detailed examination of precisely why top incomes changed over time in Sweden, and the lessons of that examination appear to be that you trim down top incomes by taking their wealth.

The Swedish paper finds firstly that the pretax income share of the top 10 percent fell dramatically during the first half of the 20th century and that this drop was almost entirely driven by the collapse of the incomes of the top 1 percent. 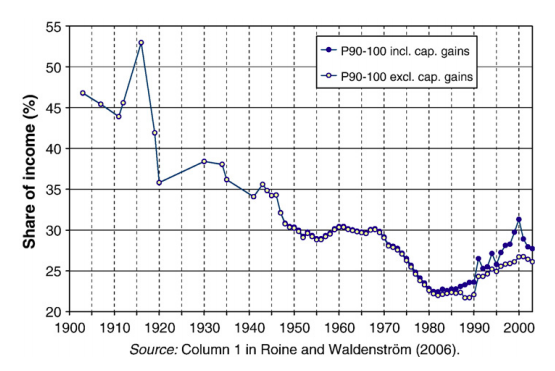 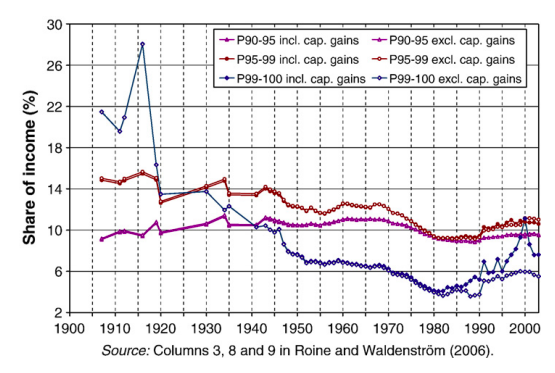 After the pre-1950 fall, the pretax income shares stabilize for a bit and then start to fall again in the 1970s.

Why did capital income drop so much for the 1 percent before 1950? Mechanically speaking, there are two possible causes, both of which happen to be the case.

The first cause is the decline of capital’s share of output. 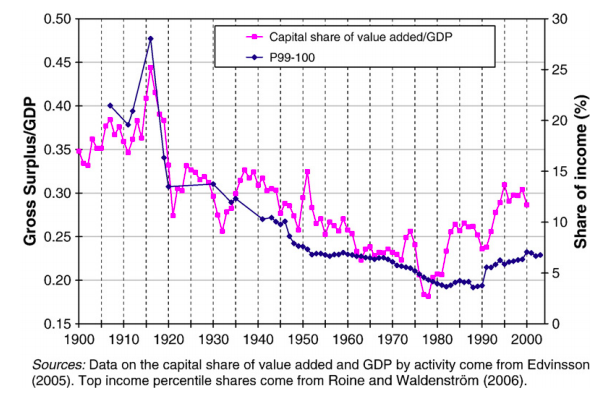 Before 1920, around 35 to 45 percent of Swedish income was being paid out to capital. By 1950, it was down around 25 percent. Capital’s share dips again in the 1970s, which is also the second time we see the pretax income shares of the top 1 percent fall considerably.

When you put the two causes together, you get a pretty clear story about what happened to the pretax incomes of the top 1 percent before 1950 in Sweden: they lost over half of their share of the national capital and the capital they had left started receiving a much lower rate of return. These two changes then dramatically reduced the amount of capital income received by the top 1 percent and thereby dramatically reduced their share of total national income.

Before we get into why the 1 percent lost so much of their capital and why capital’s share declined by so much, let us pause to reflect on what this paper, which Sanandaji cites approvingly, actually teaches us about how to reduce pretax income equality. If you were using Sweden’s pre-1950 experience as a guide, what you would do to reduce pretax income inequality is expropriate the majority of the wealth of the top 1 percent and then immiserate capital further by lowering the rate of investment return. I can hear Sanandaji right now: it’s a myth that the welfare state is what gets you equality, it’s actually the wanton destruction of the capitalist class.

Returning to our story: why did the 1 percent lose so much of their wealth during this period and why did capital’s share decline so much?

The authors don’t provide too much on this question, writing that “the question of why the top wealth share decreased so substantially has no obvious answer.” But they do go on to speculate that “the effects of the Great Depression” and the “dramatic collapse of the industrial empire controlled by the Swedish industrialist Ivar Krueger in 1932” are probably the most important causes of the wealth decline. The authors speculatively reject the idea that the World Wars played a big part since Sweden was not directly involved, but I think this is an error on their part as there are significant wealth drops during the World Wars in their dataset and affluent Swedes likely owned assets outside of their own country.

The authors don’t provide any guidance on why capital’s share declined so much. But one way or another, we know that during this period workers started getting a bigger piece of the pie. I don’t think it’s too out there to suppose that perhaps the Swedish labor movement had a lot to do with that. One of the errors Sanandaji makes in his treatment of the Nordics generally is that he only discusses their welfare state, ignoring their strong labor unions, which are just as important to the Nordic model and just as heavily emphasized by advocates of that model.

The final question is: why didn’t the 1 percent gradually reaccumulate the wealth that they lost in the one-off collapses of the first half of the 20th century and run inequality right back to where it used to be?

The authors provide two answers to this question. First, the high taxes of the post-1950s welfare state prevented the top 1 percent from having enough disposable income to amass new piles of capital. 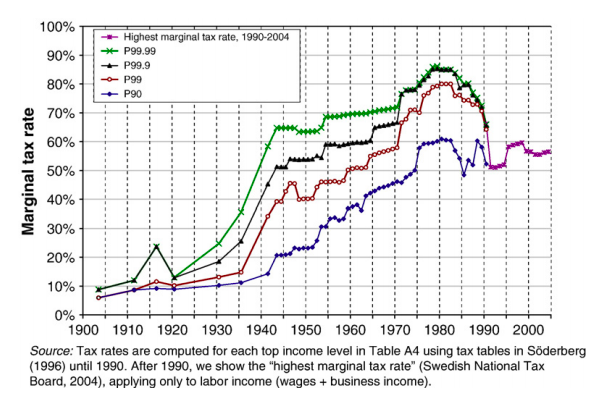 Second, since wealth could no longer accumulate at the top of society, it instead “accumulated in the corporate and government sector and among the rest of the population.” The accumulation of wealth in the government sector was especially dramatic in the post-1950 welfare state period. 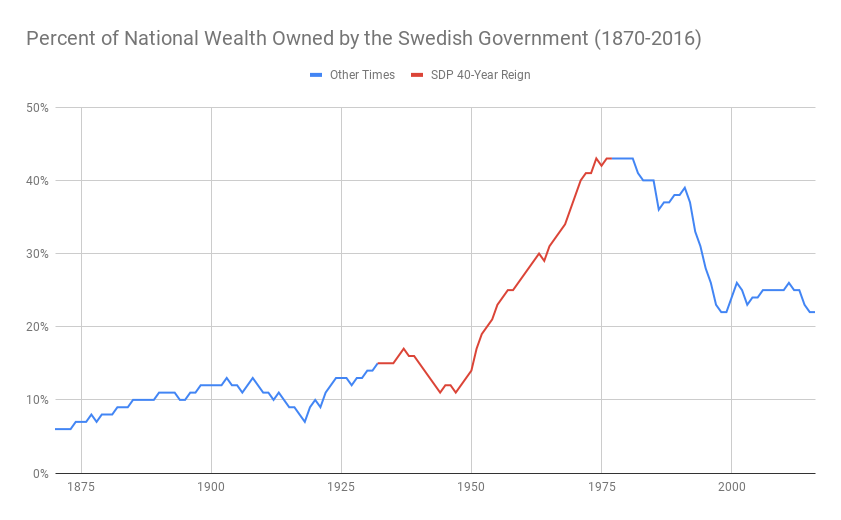 In 1950, the Swedish government owned 14 percent of the national wealth. By 1977, it was 43 percent. Once again, Sanandaji’s reduction of the Nordic model to the welfare state blinds him to its other aspects, in this case the high level of state ownership.

Needless to say, none of this debunks anything the left says about the Nordic countries or about how to tackle inequality generally.