Kamala Harris proposed a new tax credit on Thursday that is being called the LIFT credit. The LIFT credit pays people an amount equal to 100% of their earnings (or Pell grant benefits) up to a maximum of $3,000 for a single person and $6,000 for a married couple. The following TPC graph sums it up nicely: 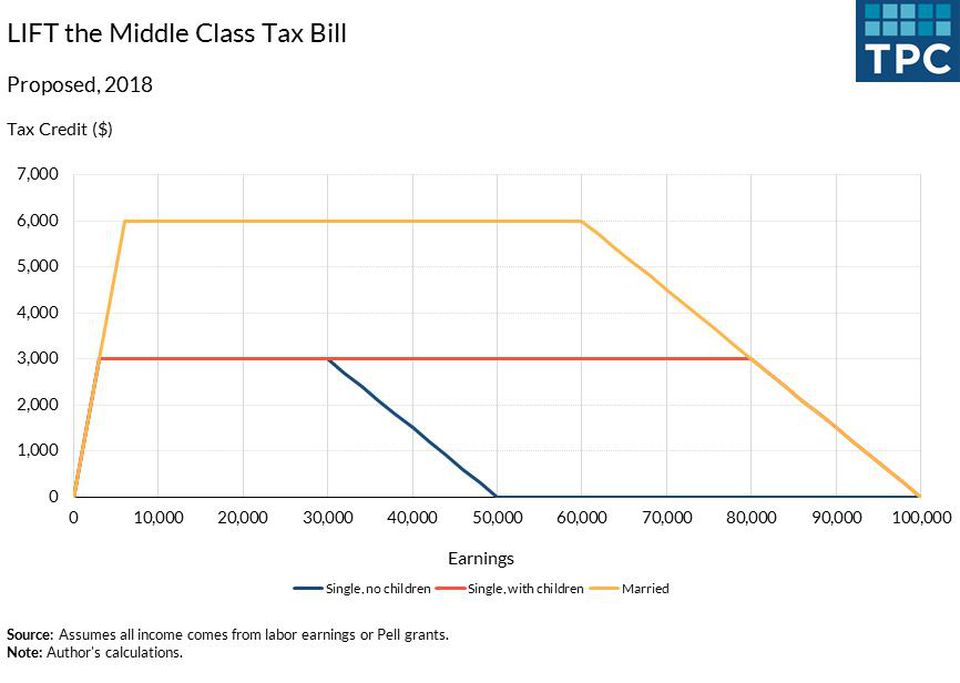 Connoisseurs of tax credits will recognize that the LIFT credit is basically the same thing as the Child Tax Credit (CTC) and the Earned Income Tax Credit (EITC). LIFT, CTC, and EITC are part of a family of policies I like to call trapezoid programs: benefits that phase in based on how much you earn, plateau at some middle income point, and then phase out at higher incomes. A program so designed creates a trapezoid-looking graph, as you can see in the CTC and EITC graphs below. 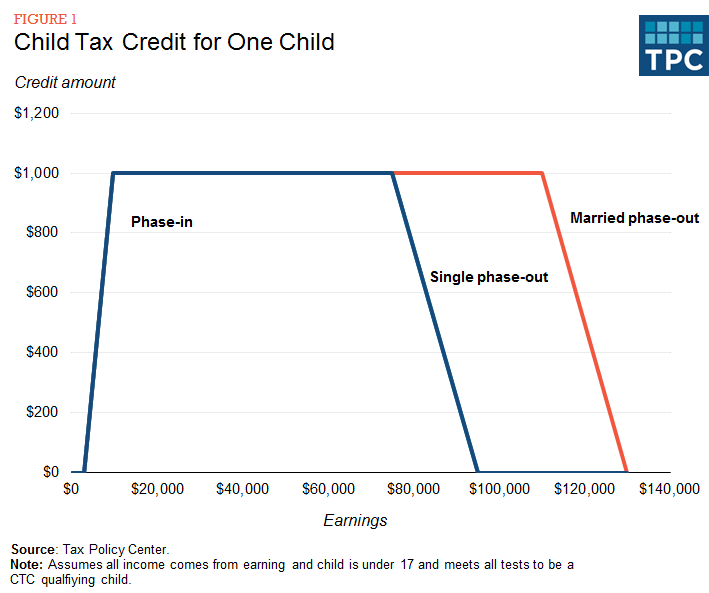 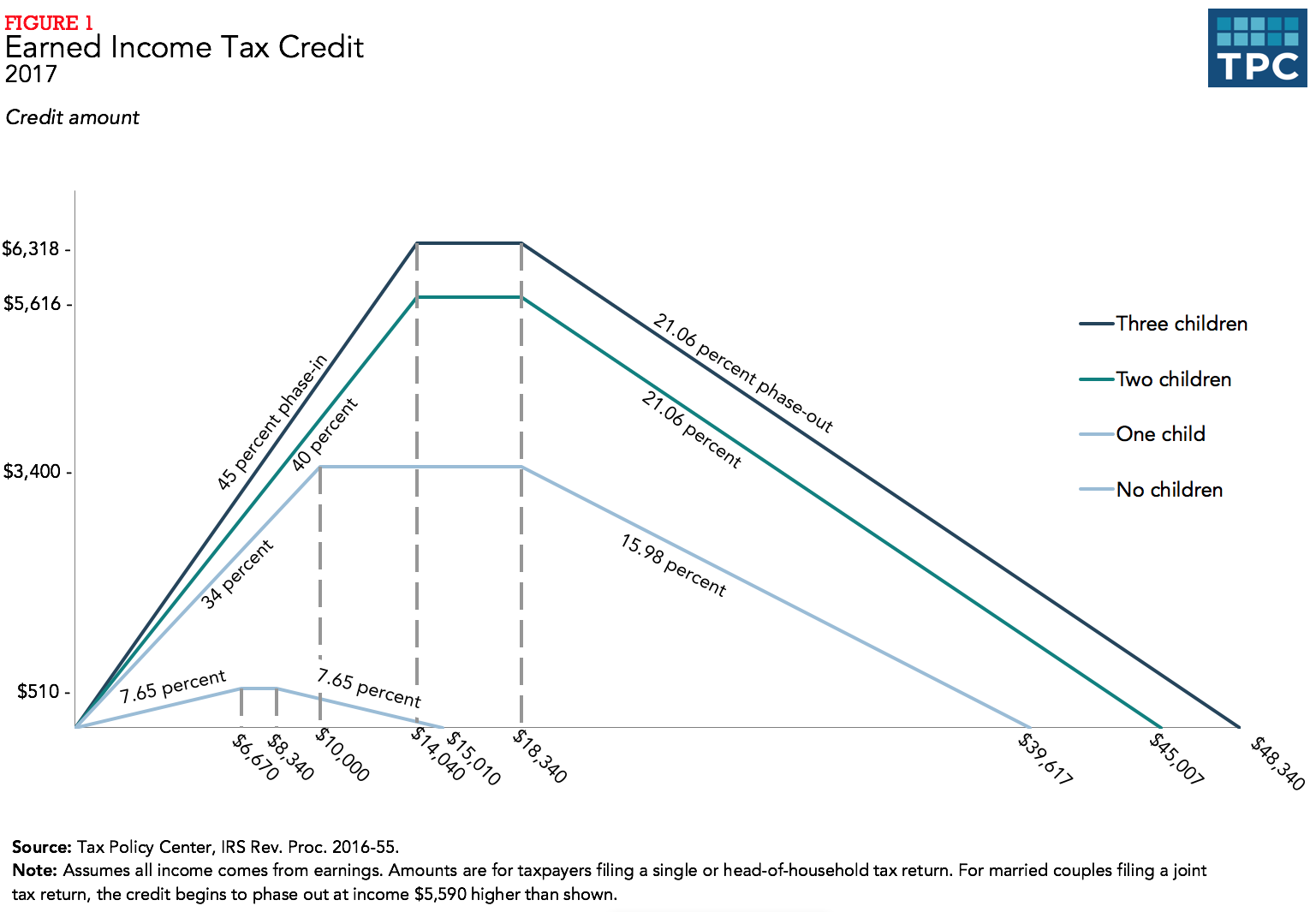 The two major trapezoid programs currently in existence — the CTC and EITC — rose to prominence primarily during the 1996 welfare reform. The CTC was created during that process in 1997 and the EITC, which was created as a modest benefit in the 1970s, was significantly expanded shortly before and after welfare reform. This was part of a general shift in US welfare policy that saw benefits cut for the very poor and expanded for the merely poor and the nearly poor. The result of this shift, according to Robert Moffitt, has been a spike in deep poverty rates.

I am not an expert in the history of why the trapezoids came into vogue. The conventional wisdom seems to be that it was driven by the rather vicious anti-welfare sentiment of the 1980s and 1990s. The very poor were cast as undeserving of public support because they hardly worked at all while the merely and nearly poor were cast more sympathetically as people who were trying to play by the rules, even if their labor did not fetch them much income. Thus, trapezoid programs made perfect sense because their phase-in design excluded the very poor and concentrated benefits on low-wage workers who put in a decent number of work hours.

Joshua T. McCabe is an expert on this history and apparently argues in his book that the conventional wisdom has it all wrong. The real drive to replace regular welfare programs with tax credits was simply an outgrowth of a generalized push towards austerity, which favored cutting taxes and spending. Tax credits are attractive in a climate of austerity because they provide benefits to people that are counted in government budgets as tax cuts rather than spending.

Whatever is the truth about the history, the effect of the trapezoids are not in dispute: they perversely exclude the most needy from assistance in favor of those who are on the rung just above them.

In the last few years, politicians have put forward a lot of new trapezoid proposals. Marco Rubio and Mike Lee proposed the creation of a second Child Tax Credit that would phase in at a lower earnings level and have a higher maximum benefit than the first CTC (which would nonetheless be retained). Hillary Clinton proposed modifying the existing CTC to do something fairly similar to what Rubio and Lee proposed. Ro Khanna and Sherrod Brown proposed massively expanding the EITC. And now of course we have Kamala Harris’s LIFT credit, which basically just creates a second EITC.

It is clear that Democratic politicians and policy shops remain very interested in trapezoid programs, but it is less clear why that is exactly. The trapezoid design is bad on the merits because it excludes the very poor from benefit receipt. This seems like it would be especially problematic in the current political climate because the very poor that these programs deprive are disproportionately women, people of color, and disabled people. The programs are also complicated, hard to explain, and even undetectable by most people because they are buried in the tax code. Those are not the attributes that generally make for good campaign fodder, to say the least.

As best as I can tell, Democrats go for trapezoid programs basically because they believe they have to give in to anti-welfare attitudes in the American public. That is, they think that the 1980s/1990s mood still reigns in American life and you cannot win an election or passage of a bill if it includes increasing the disposable incomes of the country’s poorest. This may be true, though in an age of polarization (and especially negative polarization), it seems to me that there is a good chance it is false. Given the severe downsides of the trapezoid design, it seems inexcusable to me to continue advocating for trapezoids based on vague speculations about the anti-welfare attitudes of the demos.

Not all Democratic proposals have given in to the siren song of the trapezoid. Michael Bennet and Sherrod Brown released a child allowance proposal last year that gives every family $3,600 per year for every child they are taking care of. Their child allowance proposal does (unfortunately) phase out at higher earnings but crucially has no phase-in. This means that even the poorest families in the country would receive the $3,600 benefit, not just the middle class and the merely poor.

The Brown-Bennet proposal, and others like it, is the way forward for any policymakers who are actually serious about improving the lives of the most desperate people in the country. We do not need another trapezoid, whether that’s a new and improved CTC (such as Rubio-Lee and Clinton) or a new and improved EITC (such as Khanna-Brown and Harris). Rather we need to expand the welfare state through the use of universal benefits that ideally includes everyone, but at the very least includes the poorest among us. The LIFT credit does not do this and so it should be rejected along with all the other trapezoid proposals.