Democrats introduced a bill today called the Working Families Tax Relief Act (WFTRA) that is being touted as the consensus synthesis of a bunch of tax credit proposals Democrats have floated over the past 3 years. Like all means-tested tax credit proposals, this one is a hideous kludge far inferior to regular social democratic family benefits. But worse than that, the WFTRA uses the dreaded trapezoid design that has the effect of depriving the poorest children in favor of richer children.

The US currently has two major child tax credit schemes. The first, called the “Child Tax Credit,” phases in based on earnings, meaning that richer parents get more benefits than poorer parents unless they are so rich that their earnings exceed the phase-out threshold. The second, called the “Earned Income Tax Credit,” is actually two different tax credits smooshed together in a bizarre formation. The first part of the EITC is what some other countries call a Working Tax Credit and it provides trapezoidal-shaped benefits to childless workers. The second part of the EITC is just another Child Tax Credit that has all the problems of the official CTC.

The bill wisely realizes that these two programs (CTC and EITC) are basically duplicative of one another and so envisions a grand reformation of them into a better shape. The new shape makes the official Child Tax Credit “fully refundable,” meaning that poor children get the same amount as less poor children. But it does not make the second CTC that lives inside the EITC fully refundable. So, taken together, we have a new child tax benefits regime that continues to screw over the poorest children in the country for absolutely no reason. 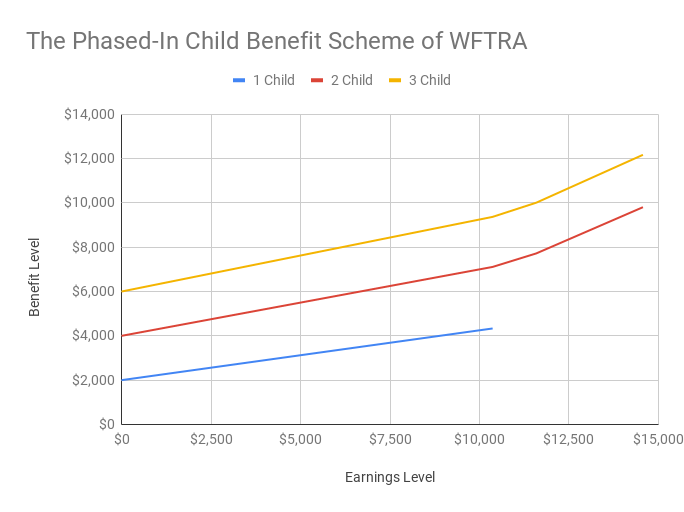 As you can see, the poorest children are receiving less than half as much as their richer peers.

What’s so ironic about this is that proponents of the WFTRA make a big deal about the fact that it makes the official CTC fully refundable, which shows that they understand it is mean, cruel, and dumb to phase in child benefits. Yet they maintain that exact same mean, cruel, and dumb design for the hidden CTC and even add on to it.

But I do expect moderate Democrats to at least commit to the principle that benefits for children should not phase in. Never phase them in. Never. Don’t do it. Poor children should always get at least as much as what other kids get in a child benefit scheme. Only total sickos think otherwise.

If Democrats are in the mood to fix the CTC and EITC so that they aren’t awful, the way forward, besides doing a real welfare state, is extremely obvious:

There is absolutely no excuse for retaining phased-in child tax benefits and, as I noted already, the sad thing is that these guys know this. The supposed reason they made the CTC fully refundable is because they acknowledged that phasing in child tax benefits is a big ‘fuck you’ to poor children. And yet, they continue to phase them in. If we can’t have a well-designed welfare state, can we at least have a poorly-designed one that doesn’t intentionally deprive the poorest children?