Regular 3P readers know that I am not fond of income supplements that phase in based on current earnings, or what I call trapezoid benefits. My main beef with the trapezoid design is that it excludes the very poor, as you can see in the illustration below.

Defenders of trapezoids generally say two things. The first is that, though it is not ideal, the politics demand that we exclude those without much work activity, and so it is better than nothing. I don’t really care about this point because politics arguments are mostly unfalsifiable and, regardless of the politics, we should still have a notion of what the objectively best way to do welfare benefits actually is.

The second point is that the design hugely increases labor supply and work activity, which improves the plight of the poor who are induced to work even more and greatly reduces the program’s net fiscal cost because workers pay taxes on the extra work activity that they engage in. Although these arguments struck me initially as implausible on their face, a decent number of papers have been written apparently showing it’s true. So my point has mostly been that I don’t really care about the increase in work activity or net fiscal costs, certainly not as much as I care about provisioning the poor.

Furthermore, surely whatever labor supply boost we are hoping to get from this stuff has mostly already been gotten by the EITC and CTC and myriad other similarly designed programs, meaning we don’t need to add even more trapezoids to the mix, as the RISE credit, LIFT credit, GAIN Act, and Working Families Tax Relief Act would.

The EITC Does Not Increase Labor Supply

But these arguments no longer appear necessary as new research from Henrik Kleven indicates that the second point is empirically baseless. Trapezoid structures — the EITC in particular — do not appear to increase labor supply, and the belief that they do comes from questionable studies focused on a single EITC expansion in the 1990s.

The argument that trapezoids have dramatic labor supply effects is basically entirely driven by the fact that the purple line in the graph below runs up between 1993 and 1997. That line shows the labor force participation rate of single women with children, which is the major target population of the EITC. This run up followed the EITC expansion in 1993, which is indicated in the graph by the vertical line titled OBRA93.

However the graph also indicates the four other expansions of the EITC with vertical lines, and none of those are followed by any particularly pronounced hike for the purple line. As Kleven notes, the gap between the purple and black lines is totally stable across 50 years during five different EITC events with the sole exception of the 1990s. 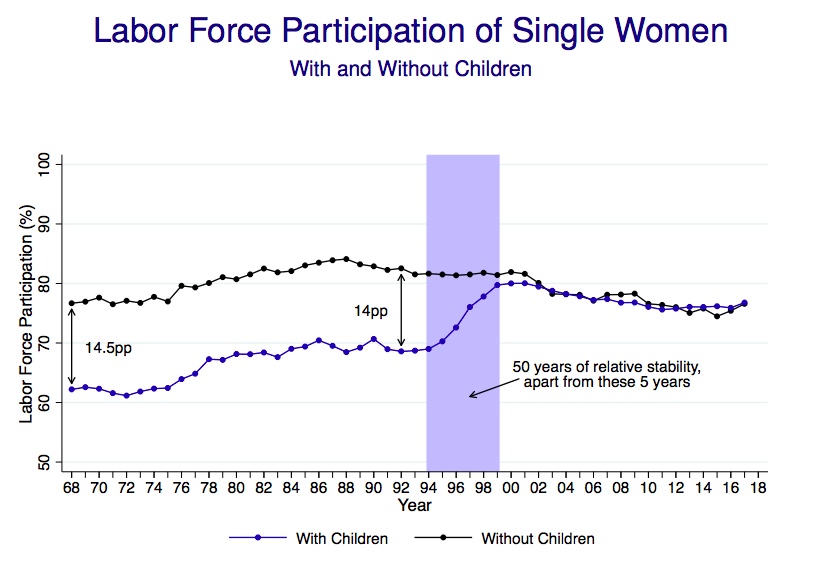 It’s not just these other four EITC expansions that were duds either. Between 1984 and 2018, states implemented 28 state-level EITC supplements. Kleven looks at the eight largest state-level EITC increases and finds no clear evidence of an increase in labor supply.

It’s not just the US either. The UK has an EITC-like program called the Working Tax Credit (WTC), which Kleven also looked at. The WTC was massively expanded in 1999, but Kleven’s statistical tests could find no increase in labor supply after applying various controls.

Finally, to cap it all off, Kleven takes his own look at the 1993 expansion, the apparent outlier in the group that has nevertheless motivated an entire policy consensus that trapezoids massively increase labor supply. His analysis shows that, after you control for state unemployment and welfare waivers, there is no significant increase in labor supply for single women with children relative to single women without children during the 1993 to 1997 period.

After Kleven is done walking through the various trapezoidal events, there is simply nothing left of the labor supply theory. Thus the only substantive defense for phased-in trapezoids that exclude the poor is apparently built on a myth.

Why Would They Increase Labor Supply?

When I read Kleven’s presentation, I was reminded of the reaction I had when I first heard the claim that the EITC causes a lot more people to go to work, which was: how on earth do the people who could benefit from the EITC even understand what the EITC is? Creating a refundable tax credit that increases take home pay for every unit of work up to a certain threshold can only incentivize people to work if they know the tax credit exists and can comprehend how it works. 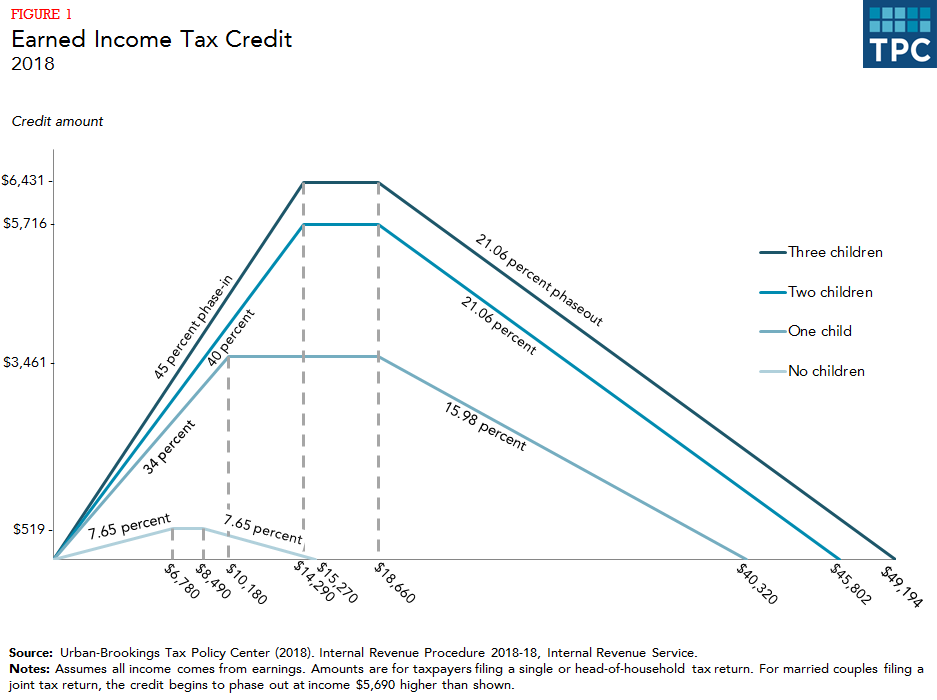 It seems preposterous to imagine that the average person in the US could explain even the basics of how the EITC works, let alone low-earning single mothers who have a lot on their plates already. The idea that they took notice of the 1993 tax reform and went out to work to soak up the more generous EITC benefit just seems ridiculous.

It is even more ridiculous when you realize that the EITC benefit is not paid to workers while they work but instead at the end of the year as part of a nebulous tax refund check. Thus to believe that nonworking single mothers were nudged into the labor force by the EITC expansion itself, you’d have to believe that working single mothers noticed their end-of-year tax refunds were higher, somehow connected this specifically to the EITC, and then somehow connected that to an understanding that the EITC was a phased-in benefit that paid out more for every unit of labor, and then from there communicated this to nonworking single mothers who took up work as a result. It’s nuts.

Even if you believed that the incentive to work that is inherent in the phase-in design could get more people working, it is hard to imagine how the EITC in particular could do that. Perhaps a direct wage subsidy program that was able to clearly communicate to low earners that they will receive a higher payoff for each hour they work could increase the number of people working. But the EITC is not like that at all. Its design as an end-of-year addition to a lump sump tax refund that is mixed in with everything else that goes into a refund just seems like it cannot convey the kind of information it would need to convey to actually get people to respond in the way that the old studies said they did.

Going forward, we should avoid trapezoid benefits and turn ideally towards universal benefits or at minimum towards benefits that do not phase in. Excluding the poor from supplements to current income is distributively heinous and has no other positive side effects.