Jeff Stein reported that Bernie Sanders is planning to endorse some sort of funds socialism proposal in the upcoming election. This will no doubt ignite a conversation on the left that has already begun (me, McCarthy, Matthews) about how best to go about this program.

As I noted in my piece on the subject last week, we can break down the funds socialism family into a 3×3 matrix with ownership level on one side and how the fund returns are used on the other side.

One natural answer to both questions, which you see adopted most often by advocates of worker cooperatives but also to some degree by the Labour Party’s inclusive ownership funds (IOFs), is that the workers in each firm should vote the shares for that firm and receive the return on the shares for that firm. This is the middle-left box in the matrix above.

The seeming obviousness of this answer is no doubt why proposals for “worker ownership” or even the Labour’s inclusive ownership fund manage to attract fairly wide appeal when polled. As Peter Gowan noted in Vox when asked why not do funds socialism on a society level rather than a firm level:

I think there is a stronger intuition among people that they are entitled to share in control and ownership over the company they spend their time in than, for instance, 1 share in hundreds of millions of every company in America.

But before we go headlong into organizing funds socialism on the firm level, we need to be clear-eyed about the problems of doing so. Those problems are many, but here I want to focus on the main problem that undergirds all of the others: firm boundaries are arbitrary, meaning capital and labor factors are spread across firms in very unequal and meaningless ways.

A firm is a legal unit that engages in some kind of productive activity. No firms are entirely vertically integrated meaning that they literally own or employ every single input that goes into their productive process from the “ore forward.” Instead, most production occurs within long value chains that are sliced and diced into different firms. The mining company digs the coal. The trucking company moves it to the coal plant. The electricity generation company burns it for electricity. The electric utility distributes it to customers. These firms all buy supplies from other companies: desks, paper, etc. They also probably use various contractors that are not formally employed by their firms. And on and on.

The idea that the value-added that formally occurs inside each firm is the sole province of the workers in that firm seems clearly ridiculous when you consider how complicated and arbitrary the organization of value chains actually are. This idea is made even more ridiculous when you start thinking about how easy it would be to reorganize firms to dramatically alter the location of capital and labor factors across firms.

Consider the following simple diagram of four firms, three of which provide intermediate inputs to a fourth one which provides a final output sold to an end consumer. 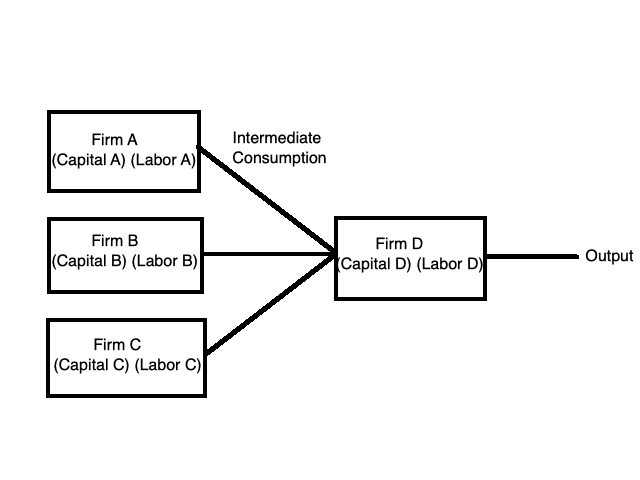 Firm-based socialist ownership policies would basically make it so that the labor in each firm now owns the firm and, effectively, the capital in that firm. But workers and capital can easily be shifted between the firms without altering the productive process in any meaningful sense.

For instance, suppose Firm D owns a bunch of buildings where it does its production, which is part of what is contained in Capital D. Firm D could easily spin those buildings off to Firm A and then lease them back. Now some of Capital D sits in Firm A.

Suppose further that Firm D has a lot of employees (part of Labor D) that aren’t necessarily part of their main business, such as janitors and cafeteria workers. Firm D could easily move the janitors into Firm B, which is a janitorial services company and the cafeteria workers into Firm C, which is a food services contractor. Now some of Labor D sits in Firms B and C.

I raise this point not to say that firm-based socialism would incentivize such reorganizations of people, but rather to point out that how you organize labor and capital across firms is somewhat arbitrary, which means that matching the labor and capital in each firm to one another is also kind of arbitrary and will generate random and very inegalitarian results.

For another example, consider companies like Duke Realty, which employs a relatively small number of workers to lease out and manage its huge stock of logistics warehouses. Duke Realty makes millions of dollars of profit per worker it employs, but its workers don’t necessary do work that is substantially more difficult than somebody who works in the front office of an apartment complex. Under a firm-based approach to socialism, those workers could pull down million dollar dividends every year simply because of the arbitrary way in which that firm is structured to have way more capital than it has employees.

Firms are useful legal constructs, but they aren’t necessarily meaningful economic units. Labor and capital factors are bundled together into firms for legal and accounting purposes, but those bundles are quite arbitrary. It would be weird to say that the way forward is to have the workers in each firm receive the benefit of the capital in each firm when workers and capital can be slotted into firms in all sorts of different ways, each yielding very different outcomes for how much capital income identical workers will receive.

The solution to this problem is to own capital at a higher level than the firm, such as the society level in the diagram above. Or, at minimum, the return on capital should go out to society as a whole, not just the workers in the firm where the capital is located. The smart advocates of firm-focused socialism already realize this of course. This is why David Schweickart’s coop socialism imposes a capital tax on each worker-owned firm to spread out the benefit of the capital factors and why Labour’s inclusive ownership funds cap the dividend that flows to the workers in each firm with dividends paid in excess of that amount flowing to society as whole.

The cleanest way to resolve this problem would be to use a social wealth fund (bottom-right box in the diagram above), but to the extent that this is politically impractical, the next cleanest way to resolve it is to nominally do socialism on the firm level but design that socialism in such a way as to simulate a social wealth fund on the back end.