Over the weekend, Anu Partanen and Trevor Corson published a piece in the New York Times that argues Finland is actually a capitalist paradise. The article is a very familiar one to those who keep track of this debate. It notes that Finland has high taxes and a generous welfare state, but then says that it is otherwise quite capitalist and perhaps even more capitalist than America.

Unlike most people who write this sort of piece, the authors here are not being malicious. Partanen is trying to open Americans up to the glories of a comprehensive welfare state and thinks that downplaying the other socialized aspects of the Finnish economy is a good way to do that. She might very well be right about her rhetorical strategy, but ultimately it is simply not true that Finland’s economic model is just ordinary capitalism with generous social benefits.

For starters, the Finnish government owns nearly one-third of the nation’s wealth. For the United States to match that amount, the US government would need to move about $35 trillion of assets into public ownership. 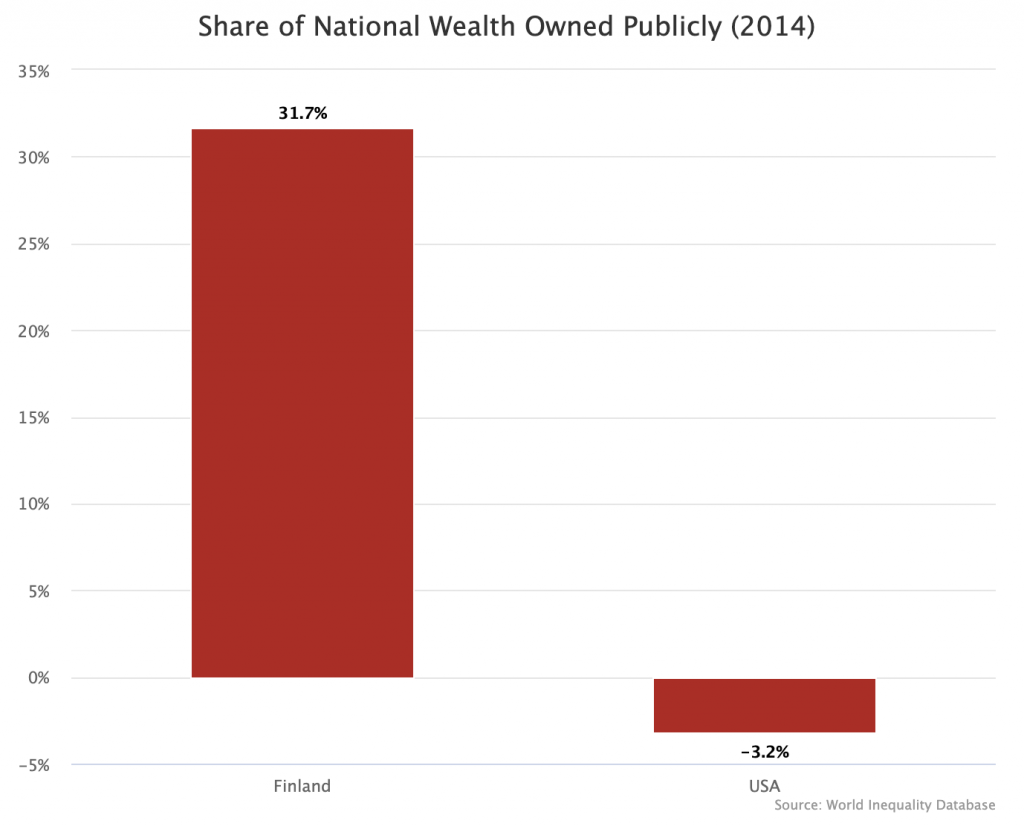 The Finns also have a large public sector, meaning that it’s not just wealth that is much more socialized but also production. Around one-fourth of Finnish workers are employed in general government services like child care, education, and health care. Another seven percent are employed in state-owned enterprises like the country’s nationalized airliner, Finnair. 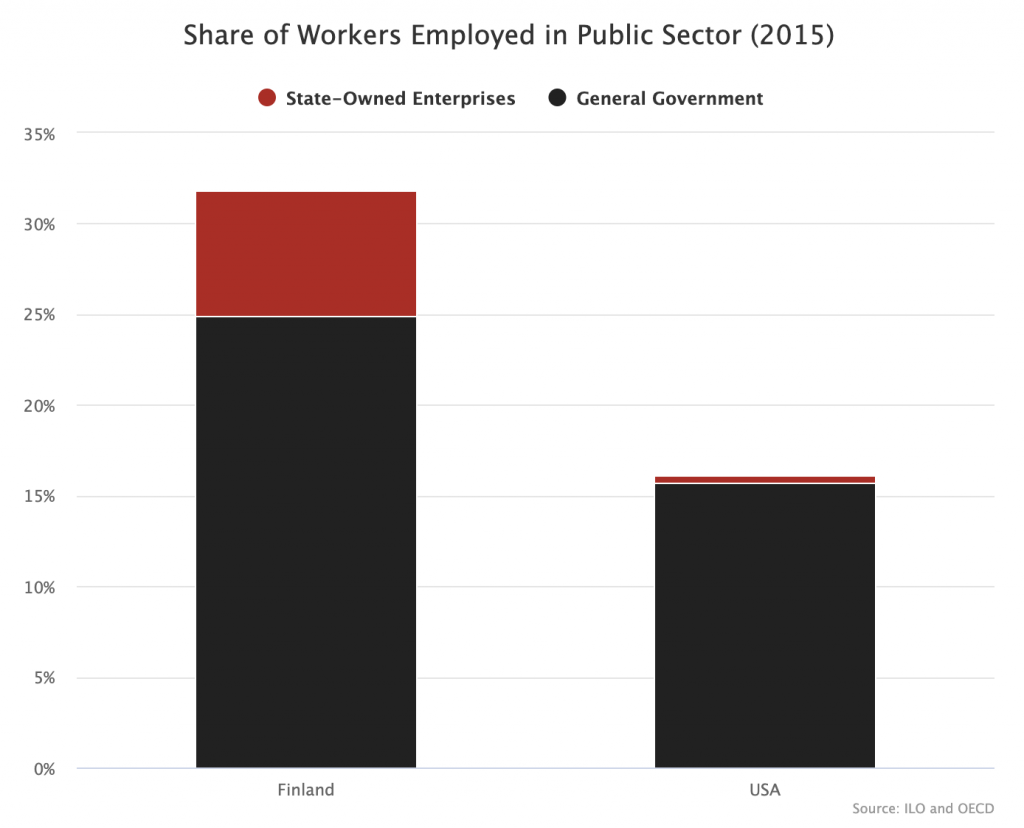 The United States would need to shift 24.7 million workers out of the private sector and into the public sector to match Finland. It would also need to expand its SOE portfolio beyond the Postal Service, Amtrak, and the Tennessee Valley Authority to include things like American Airlines, Exxon Mobil, and Verizon.

Outside of the explicitly socialized areas of public ownership and public production, Finland also has a large labor movement that clearly gives Finnish workers significant power over the economy. Around 90 percent of Finnish workers are covered by a union contract. To get America up to Finnish levels, we would need to unionize an additional 119 million workers. 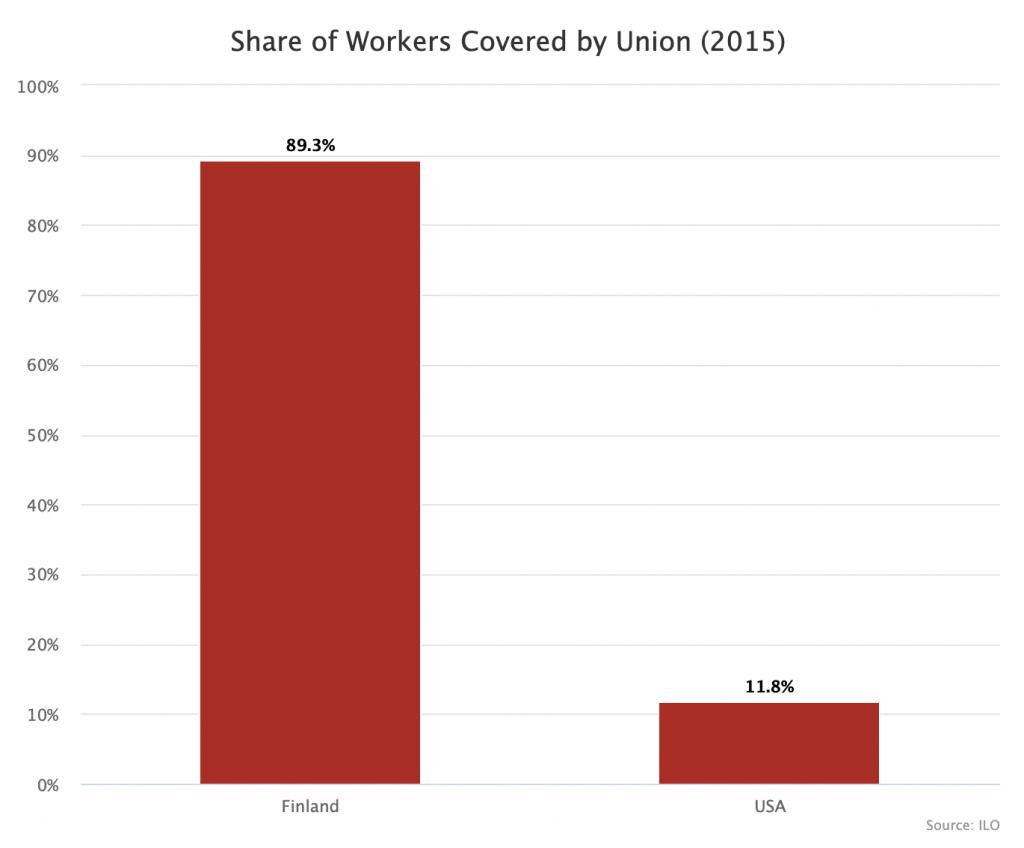 As we learned a couple of weeks ago, unionized Finns are not mere paper members either. In November, as a response to 700 postal workers receiving a pay cut, as many as 60,000 workers (in a nation of 2.2 million workers) went out on strike in solidarity, shutting down ports, railroads, buses, and airlines. The pay cuts were cancelled and the prime minister resigned after misleading the public about the matter. Another 100,000 Finnish workers are expected to go on strike this week, causing production losses of hundreds of millions of euros, as part of contract negotiations in the industrial sector.

None of this is to say that Finland is a full-blown socialist society, whatever that might look like. It definitely could and should be more socialized and left wing than it is. But in saying this, we should not lose sight of how different Finland really is from the United States. To match the Finnish economic model, the United States would need to not only build a social democratic welfare state, but also socialize $35 trillion of assets, unionize 120 million workers, and move 25 million workers into the public sector.

As much as moderates like to posture as admirers of Finland and the Nordic model more generally, they never seem much interested in proposals to move the US in these socializing directions.