The serial plagiarist Fareed Zakaria has faked his way through another column about something he knows nothing about. In this one, Zakaria slaps together a hodgepodge of false and misleading claims to insist that the Nordic countries are nothing like what socialists and social democrats in the United States say they are. As with most people who write in this genre, Zakaria is incorrect and completely out of his depth.

Inheritance taxes in Sweden and Norway are zero, and in Denmark 15 percent. The United States, by contrast, has the fourth-highest estate taxes in the industrialized world at 40 percent. 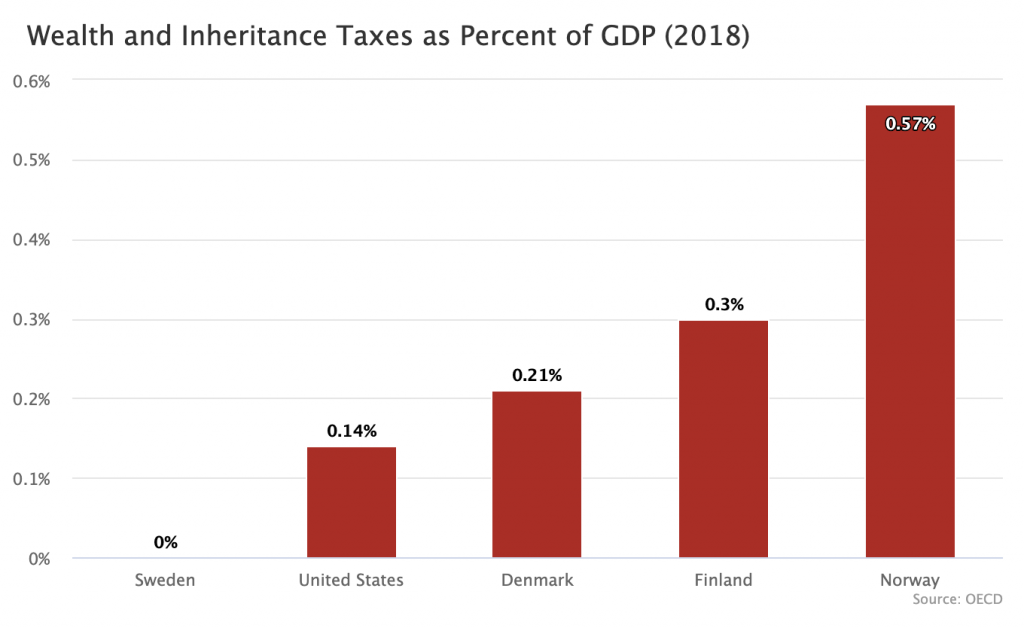 Zakaria does not understand that Denmark’s inheritance tax is much larger than America’s because all he did was pull up a report from the right-wing Tax Foundation that cited the top estate tax rate without including information on how much of a person’s estate is actually exempted from the tax. The Danish estate tax only exempts the first $45,000 while America exempts $11.58 million for individuals and $23.16 million for married couples. Furthermore, the Danish top rate is not actually 15 percent, as there is a supplementary 25 percent rate charged to estates left to individuals other than children or parents.

Sweden currently has a zero percent rate, but this is a relatively new development generally opposed by the left in the country. Sweden had an inheritance tax for 119 years from 1885 to 2004 and a wealth tax for 96 years from 1911 to 2007. During these years, Sweden grew into one of the highest-income countries in the world. These taxes were not especially problematic, but sometimes conservatives win elections. Sweden is now an outlier on this among Nordic countries.

In addition to having higher wealth taxes, the Nordic countries also own a lot more of the national wealth publicly. In a socialist society, you don’t really need wealth taxes because the state owns the wealth. In total, Nordic governments own around 33 percent of the region’s wealth. Even Sweden, after many years of right-wing privatization, still owns about one-fourth of the national wealth publicly. 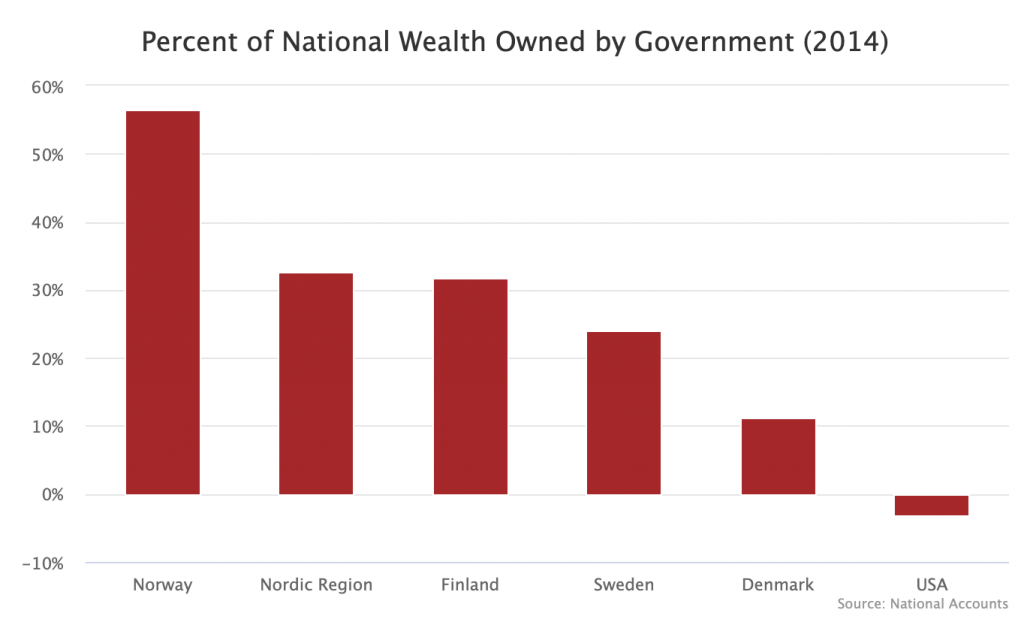 In Sweden, government spending as a percentage of gross domestic product doubled from 1960 to 1980, going from approximately 30 percent to 60 percent. But as Swedish commentator Johan Norberg points out, this experiment in Sanders-style democratic socialism tanked the Swedish economy. Between 1970 and 1995, he notes, Sweden did not create a single net new job in the private sector. In 1991, a free-market prime minister, Carl Bildt, initiated a series of reforms to kick-start the economy. By the mid-2000s, Sweden had cut the size of its government by a third and emerged from its long economic slump.

The increase in government spending between 1960 and 1980 did not tank the economy. In fact, during those years, real GDP per capita doubled in Sweden, according to the IMF. Between 1980 and 1990, per capita GDP grew another 20 percent. Swedish gains over this period were even more pronounced in hourly productivity. The OECD hourly productivity data only go back to 1970 not 1960. But between 1970 and 1990, Sweden’s GDP per hour worked increased by 42 percent. In the US, the same number was 35 percent.

The claim that Sweden did not create a single net new job in the private sector between 1970 and 1995 is one of the most misleading statistics I have ever seen. To see why, look at the trend of total employment over this period: 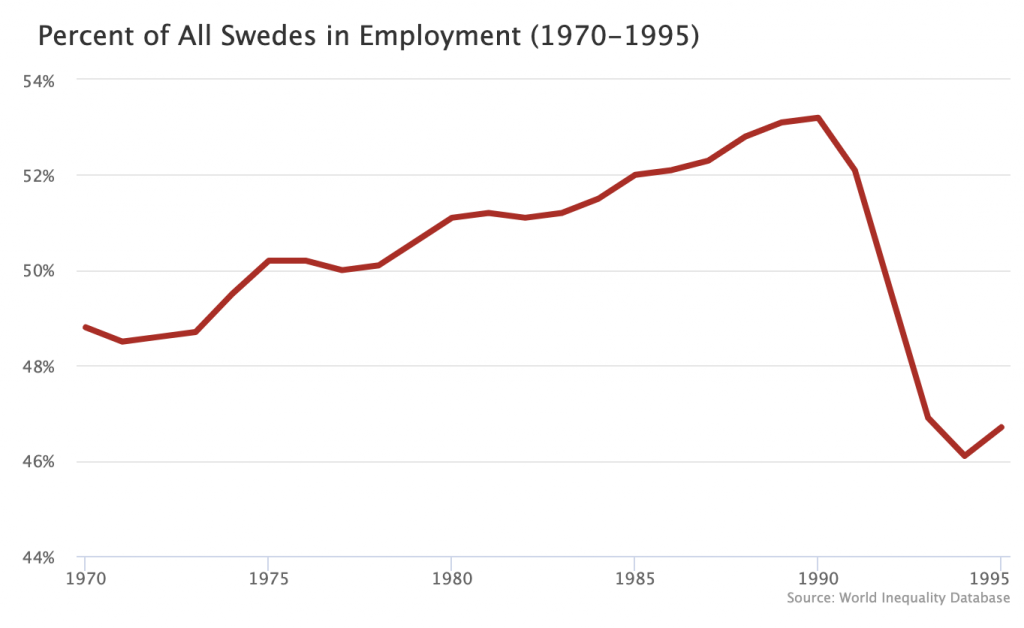 Employment (public and private) actually steadily rose 5 percentage points between 1970 and 1990 (the dreaded socialist period) and then collapsed after the right-wing got into power in 1991. This collapse was driven by a housing bubble and banking crisis that followed from the deregulation of credit markets (sound familiar?).

The claim that Sweden cut the size of its government by a third is also wrong. According to the Swedish national accounts, Swedish government spending in 1990 (the year before Bildt) was 56 percent of GDP. In 2005, it was 51 percent of GDP. Certainly spending went down a bit, but what the right-wing in Sweden really focused on was privatization, not reducing social expenditure per se.

Literally this whole paragraph is wrong, everything about it. What got Zakaria off on the wrong foot is that he just took Johan Norberg, writing for the right-wing Cato Institute, at face value. Norberg has made a cottage industry of duping Americans. He writes books, writes columns and even produces movies all aimed at tricking American audiences about this period. He is currently the Executive Director of Free to Choose Media of Milton Friedman fame.

I remember meeting the Danish prime minister, Poul Nyrup Rasmussen, who enacted many of the reforms in Denmark in the 1990s. He emphasized that the first part of the model was key: ensuring employers had the flexibility to hire and fire workers easily, without excessive regulation or litigation.

The Danes love to talk about this. But when they do so, they are comparing themselves, not to the US, but to other continental European countries like France, Belgium, and Germany that have a much more corporatist tradition. None of the Nordic countries have employment protections as weak as the US where basically every single worker can be fired at any time without notice for any reason or no reason at all. The OECD produces an index for strictness of employment protection that attempts to quantify how hard and costly it is to fire someone. Not surprisingly, it is way harder to do so in the Nordic countries (DK, FIN, NOR, SWE) than in the US. 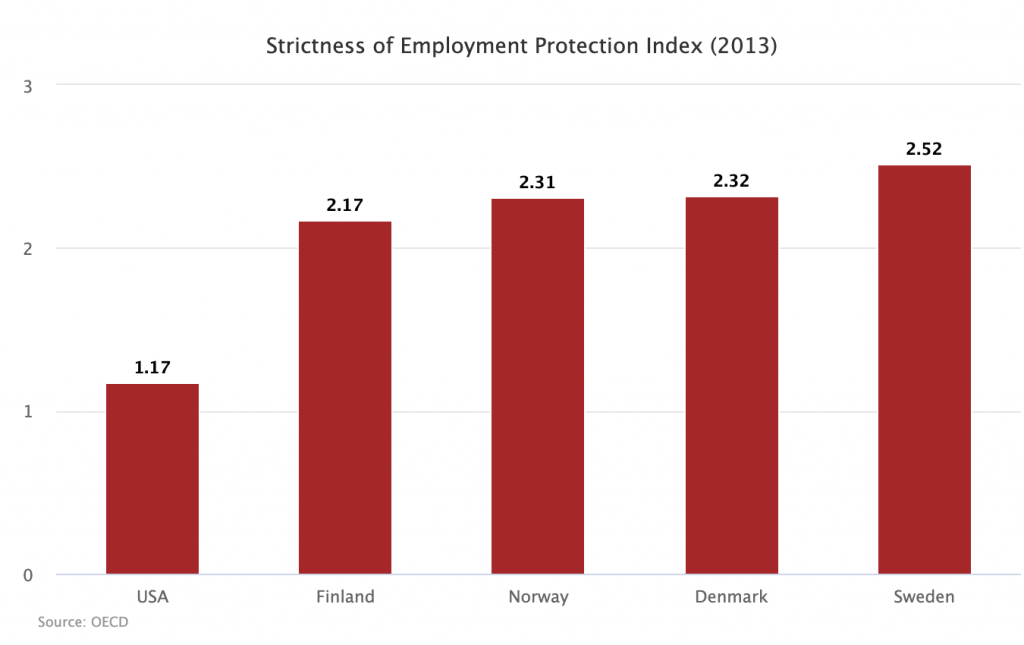 When looking across Northern Europe today, one finds many innovative market-friendly policies such as educational vouchers, health-care deductibles and co-pays, and light regulatory burdens. None of these countries, for example, has a minimum wage.

Education vouchers are only available in Sweden, following the right-wing reforms of the early 1990s. They have been an undisputed failure, with achievement scores in the country now well below where they were before privatization. The failure is so well understood in the region that in a discussion I had with a right-wing MP in Finland a couple of years ago, he said he was in favor of privatizing health care providing in Finland, but not education due to the experience in Sweden.

The International Health Care System Profiles provided by The Commonwealth Fund include Sweden, Denmark, and Norway. None of them have deductibles. I assume he is confusing deductibles with cost-sharing caps, which are what we call out-of-pocket maximums.

Denmark has the highest cost-sharing caps of the three and even there hospital visits and primary care services are completely free. The cost-sharing only really comes in for dental, vision, and drugs and even then is capped at around $2,400 per year, with means-tested assistance for some. About half of the population buys supplemental insurance to eliminate even that cost-sharing, meaning that the supposed purpose of the cost-sharing, curbing utilization by making people have skin in the game, is not actually present for those people.

Claims that the Nordics have a light regulatory burden are, as I’ve written before, utterly ridiculous. These claims are based on metrics that essentially add up how many discrete steps it takes to start up and run a business and the Nordic countries excel on those measures because they have a very efficient centralized state rather than the horrific federalist hodgepodge Americans deal with. Actual regulation that people care about — environment, product liability, labor, and so on — are not captured in these measures.

Finally, Zakaria citing the lack of minimum wage in these countries as an indicator that they are actually sort of right wing reveals once again how unbelievably ignorant he is. In these countries, the vast majority of workers are organized into unions that negotiate wages and conditions for virtually every worker in each country on a sector by sector basis. This approach to setting wages has dramatically compressed the distribution of wages in the countries, with workers near the bottom of the market receiving some of the highest wages in the world: 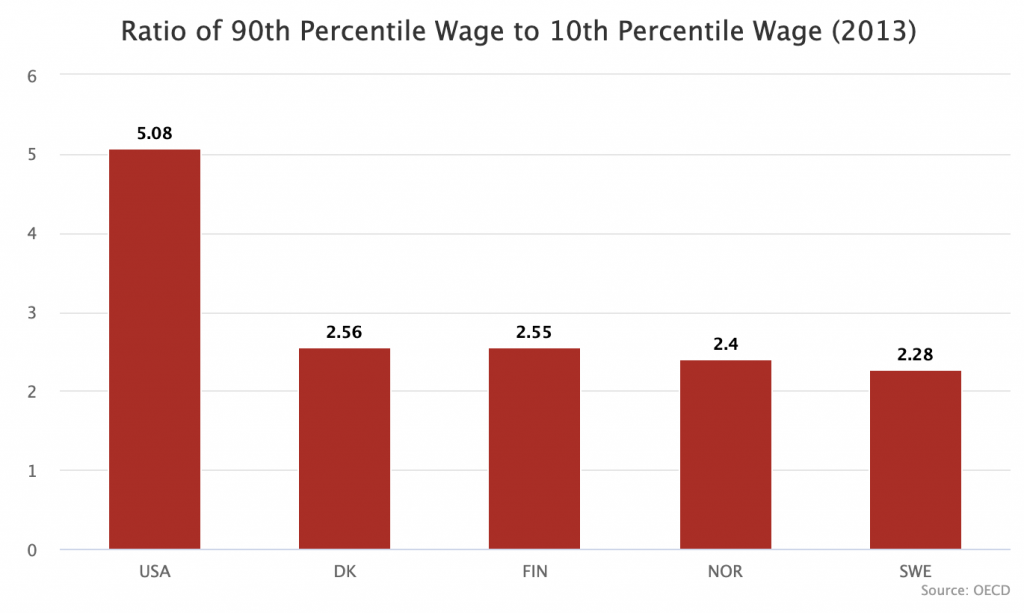 In Finland, it is the business lobby that pleads for the creation of a minimum wage and the unions that repeatedly slam the idea as a right-wing ploy meant to undermine the wages of workers. The lack of minimum wage is not because of market liberalism. It’s because the labor institutions in the country are so far left that the minimum wage is seen as conservative by comparison.

Distribution of the Tax Burden

The last point Zakaria makes over several paragraphs is that the tax burden is distributed less progressively in these countries than in the US. There are three basic problems with his presentation of this point.

Second, as far as tax systems themselves go, the Nordic countries clearly soak the rich more than America does and by a large margin. 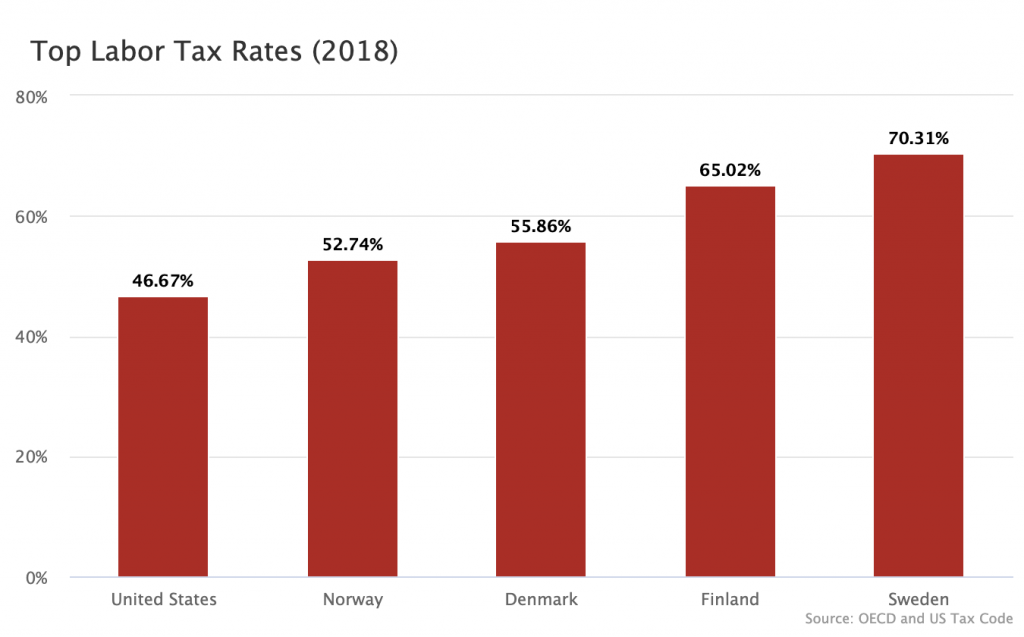 Zakaria tries to massage this point a bit by saying that, though it is true the top marginal tax rates are a lot higher, those tax rates kick in at a lower income level, and so that undermines the idea that they are soaking the rich. But this gets it exactly backwards. If you start your top rate at $500,000 instead of $100,000, that means you exempt an extra $400,000 of very rich people’s income from the top tax rate. The lower the income threshold for the top rate, the more you soak the rich.

To be like the Nordics on taxes, the US can’t just apply their tax schedule to our much more unequal market income distribution. Instead we either have to make the market distribution more equal through union-driven wage compression or we need to tax higher up the ladder. Until you’ve accomplished the former, you have no choice (and no good reason) but to do the latter.

In short, just about everything in Zakaria’s article is incorrect. The Sanders agenda differs in some respects from Nordic countries, just as Nordic countries differ from one another. But it’s fundamentally very similar. He supports much higher unionization, a universal social democratic welfare state featuring national health insurance, expansive college subsidies, and expansive child care subsidies, and a shift towards greater collective ownership and control of the economy. This is what the Nordic countries still have, even as some have seen their system decline some from their golden years.