A strange argument has been brewing in parts of the American left that says that the COVID economic response was a massive corporate giveaway. It seems like Matt Stoller, David Dayen, and Zach Carter are leading this argument, but it has recently been effectively adopted by Lydia DePillis, Justin Elliott and Paul Kiel at ProPublica.

For those familiar with the COVID economic response, mostly contained in the CARES Act, it is initially hard to understand how this can be the case. Broadly speaking, the economic relief provided by the CARES Act consisted of cash transfers to households and small businesses plus loans to large corporations. Insofar as corporate debt has to be paid back while cash transfers don’t, it would seem like the relief was clearly slanted towards households and small businesses, not large corporations.

In order to argue otherwise, what proponents do is act like there is no difference between a loan and a cash transfer. So for example, in the below graph from ProPublica, money that TransDigm borrowed from the bond market is graphed alongside cash transfers (EIDL and PPP loans are forgivable) with the deceptive headline that “TransDigm Got More Than All Stimulus Checks in Cuyahoga County Combined.” 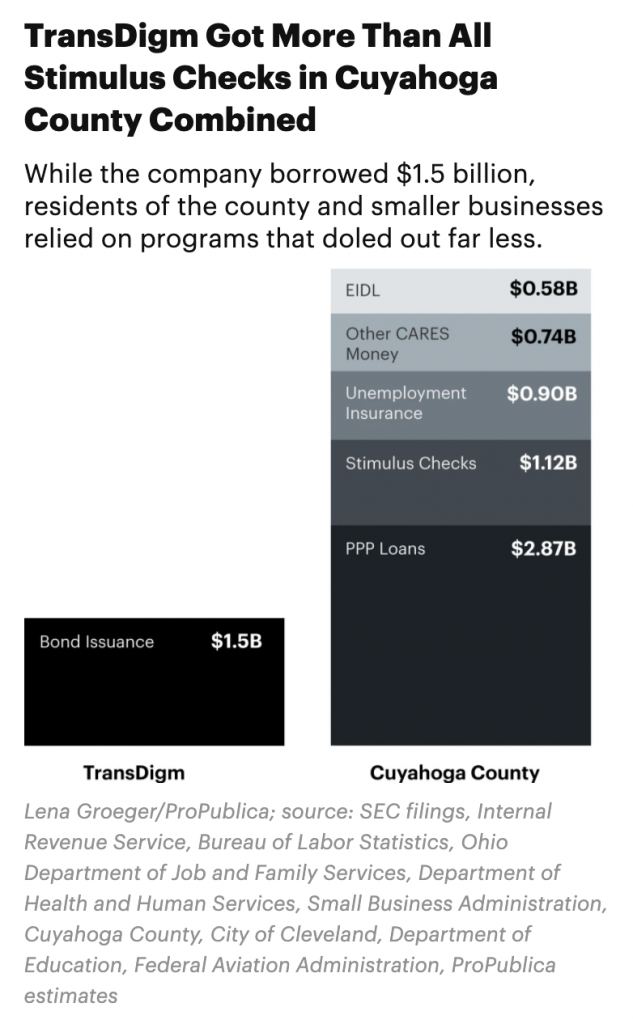 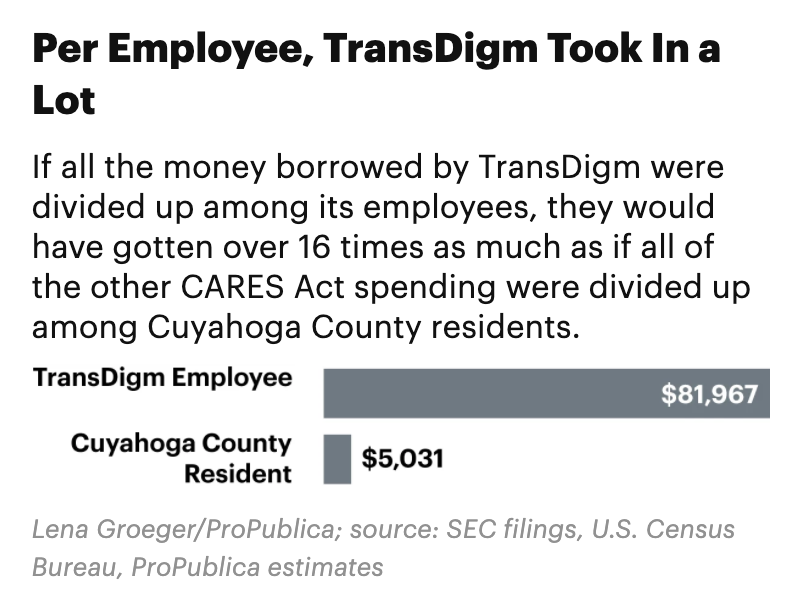 Sophisticated purveyors of this argument realize that it doesn’t make sense to pretend that debt and transfers are equivalent. So what they do is talk about how the Federal Reserve’s monetary stimulus efforts, i.e. through the Secondary Market Corporate Credit Facility (SMCCF), drove down the interest rates on corporate bonds.

It’s true that the Fed has pushed interest rates down across the board, including on corporate debt, but it is hard to understand how that constitutes a giveaway. Were the interest rates that existed right before the pandemic hit the “correct” interest rates? Is everything below those rates a subsidy and everything above them a tax? Obviously not. So what do non-giveaway interest rates look like? Do we really think that in the middle of an extreme economic contraction that interest rates should be higher than they are right now? It’s all very undertheorized.

Of course, even if you assumed that the decline in interest rates was a giveaway to corporations, the appropriate way to measure the magnitude of that giveaway is not the amount of money they borrowed, but rather the amount of interest they are saving on that debt. According to a recent NBER working paper, the SMCCF announcement and then administration pushed corporate bond interest rates down by 0.25 percentage points. Applying this 0.25pp interest rate savings to the $1.5 billion TransDigm bond issue featured in the ProPublica piece above reveals an interest savings of $3.75 million per year. The $1.1 billion of stimulus checks in Cuyahoga County are 298 times greater.

What’s also important to remember here is that the $3.75 million of interest savings for TransDigm comes out of the pockets of bond investors, which are, like all financial investors, extremely affluent. So to the extent that these lower interest rates represent any kind of a transfer at all, it is a transfer from an overwhelmingly affluent investor class to corporations whose stock the investor class also overwhelmingly owns. In short: who cares?

What’s especially weird about this particular complaining is that ensuring that large corporations remain afloat through the pandemic seems like an obviously good thing, seeing as they employ a large share of the workforce and coordinate a large share of our economic activity. This differs somewhat from the 2008 bailouts where banks, who were themselves responsible for the economic collapse and don’t actually employ that many people or coordinate that much production, were provided loan packages. That may have been necessary in order to keep the financial system afloat, but it still leaves a bad taste in the mouth. In this case, the corporations staying afloat on cheap debt had nothing to do with the pandemic.

Based on the narratives in the ProPublica article, it seems like there may also be a general sense of sadness about the fact that large corporations are more resilient to economic shocks than small businesses, in part due to the fact that large corporations can easily access financial markets. I don’t have the same sense of sadness about that. Instead, I’d say it is a pretty good argument for keeping the small business sector relatively small. But even if you do have that sense of sadness, the effort to translate that into policy grievance is a little confusing. Small businesses were offered free money via the Paycheck Protection Program and almost all of them managed to get it.

There are a lot of things to complain about when it comes to the COVID economic response. The fact that corporations were able to access cheaper debt due to monetary stimulus efforts is not one of them.