Conservatives generally engage the public debate in intentionally dishonest ways, whether that’s Charles Blahous deceiving people about provider payment cuts in Medicare for All or Kevin Williamson saying that giving workers 40 percent of the seats on corporate boards is nationalization. If you watch the public debate a lot, you get used to this, but it still remains somewhat annoying.

This new piece by Giancarlo Sopo at the Federalist is a classic in the conservative genre of takes that are both intentionally deceptive and totally incoherent. The argument of Sopo’s piece goes like this (seriously):

If you think there is no way that this is an accurate account of his argument, read the piece for yourself.

The fun thing about this argument is that literally every piece of it is false.

Sopo claims that the Mexican state owned 60 percent of the country’s wealth in 2009. He says his source for this is the World Inequality Report. But the WIR does not contain any data about Mexico in it.

When I asked for clarification on this, Sopo said that he had gotten it from the World Inequality Database (WID) that is also on that site. The WID has a lot of different data in it from different countries at varying stages of completeness and reliability. The Mexican data is compiled by researchers Wouter Leenders and Luis Bauluz and is described on the site as a “work in progress.”

I emailed Leenders about this seemingly odd figure and he explained:

For Mexico, the private wealth and public series are “my” series that relied on very limited data. The “market-value national wealth” series are those updated by Luis and these are therefore not comparable with my old series. If you want to get an indication of the share of public wealth in total wealth: you can see from the old series in the graph, net public wealth is considerably lower than net private wealth.

To understand what he is saying here, you can look at the following graph. 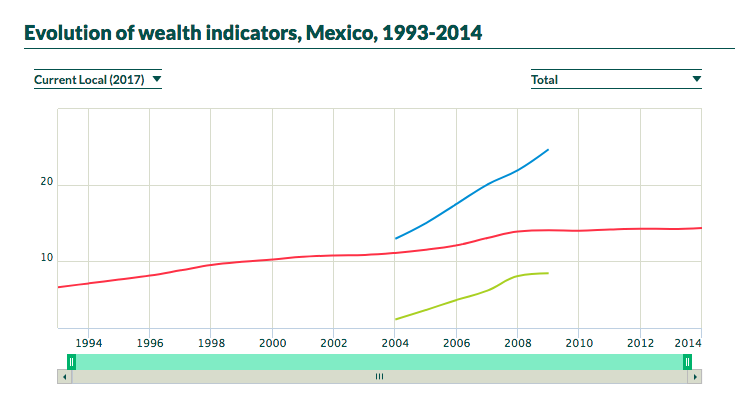 What Sopo did instead was take Leenders green (net public wealth) line and divide it by Bauluz’s red (market-value national wealth) line. But these are not compatible series that permit that kind of calculation. Of course, Sopo must know this because dividing the green by the red line says that the Mexican state increased its share of the national wealth from 21.5 percent in 2004 to 60 percent in 2009, an obviously insane finding.

I guess if you wanted to be really charitable to Sopo here, you could say that he was trying to demonstrate the unreliability of all these data. But they aren’t all unreliable. In particular, the data published in the WIR (not the WID) are very reliable and are from countries with very detailed national accounts. The Norwegian figures, which show that the government owned around 60 percent of the national wealth in 2016, come straight from the the country’s national accountants who I contacted directly by email before I started publishing the claim.

The weird thing is that Sopo seems to know that his Mexican figures are unreliable because in his piece he also says that, using his calculation method, South Korea owns 21,205 percent of the country’s national wealth, which obviously cannot be true. But instead of questioning whether his calculation method is wrong or getting the authors to clarify, he just publishes these figures. Like I said: intentional dishonesty is the calling card of conservative punditry.

In a separate email, the WIR’s Gabriel Zucman said “The national wealth data for Korea and Mexico are wrong and we don’t use them in the WIR. They should not be in our database—our mistake, we’ll fix the database asap.”

By the time we get to step 3 in the argument, it’s already failed two times. But Sopo is not satisfied with two points of failure and decides to go for the hat trick by arguing that Mexico cannot be socialist because its head of state was conservative in 2009. This is more of a judgment call than it is an outright factual mistake (like the other two), but it is clearly nonsensical.

I know the precise contours of socialism are disputed, but even within those disputes people generally acknowledge that a country is socialist or not based on its economic institutions, not based on the self-professed ideology of its leaders. If you have a full-blown socialist economy (whatever that might be) and then the head of state changes hands to someone who is not a socialist, that country does not flip to being capitalist on inauguration day. Likewise, when you have a capitalist country whose head of state flips to a self-professed socialist, the country does not toggle into socialism.

Since socialism refers to economic institutions, what matters is whether the institutions are in fact socialist. So if the Mexican state did own as much wealth as Sopo falsely claimed they did, they certainly would be a quite socialistic state regardless of what their head of state’s personal ideology was.

So the argument is both wrong on every level and unnecessarily elaborate. Sopo is apparently angling for that Kevin Williamson market.