On Friday, I wrote a piece noting that Giancarlo Sopo’s article in the Federalist about the Nordic countries was full of errors. Sopo tells me he has asked the Federalist to issue corrections on the errors I identified in my piece, but so far the Federalist has not done that.

If they do get into the mood to do corrections, then there are a lot more to make than the ones I identified in my initial piece. Before listing all of those errors, let’s start with some facts.

In the below graph, I have calculated how much of the national wealth each Nordic government owned in 2014. That is the last year in which all four have data. I have also produced a figure for the Nordic region as a whole (i.e. if you combine the figures of all four countries). 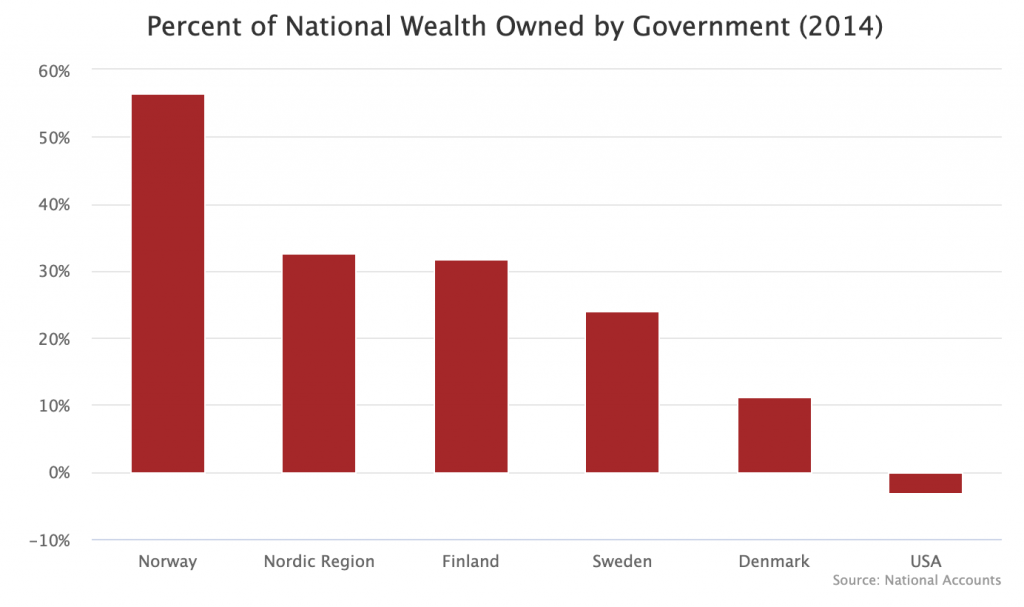 These figures come initially from the World Inequality Database, but were subsequently double-checked with each country’s national account or with the economist responsible for them. What they say is that in 2014, the Norwegian state owned 54.6 percent of its nation’s wealth; Finland owned 31.7 percent; Sweden owned 24.1 percent; and Denmark owned 11.2 percent. For the Nordic region as a whole, the figure is 32.6 percent. In 2014, the US government owned -3.2 percent of its nation’s wealth.

Given the facts contained in the graph above, Sopo’s piece contains the following errors that also need to be corrected:

Also, unrelated to his statistical mess up, Sopo keeps saying that Finland is a Scandinavian country. It’s a Nordic country, but not a Scandinavian one.

I look forward to the Federalist’s corrections on these points. If they are made, the article will be basically entirely gone.