Cory Booker released some details of his new American Opportunity Account Act proposal on Monday (Vox, Senate). Under the proposal, the federal government would use 18 years to capitalize a social wealth fund and then, in year 19 of the program, start using the fund to pay out means-tested grants to 18-year-olds. The grant recipients would only be able to use the money for approved purposes such as education fees, a down payment on a house, or contributions to a retirement account.

The centerpiece of Booker’s proposal is the capitalization of a moderately-sized social wealth fund. To understand how this would work, it is useful to put some hard numbers to it.

If you assume that around 4 million children are born each year, then the annual contribution into the fund starts at $4 billion in year one of the program. It then steadily rises based on the phase-in method discussed above so that $62.5 billion is contributed in year 18 of the program and every year after that. 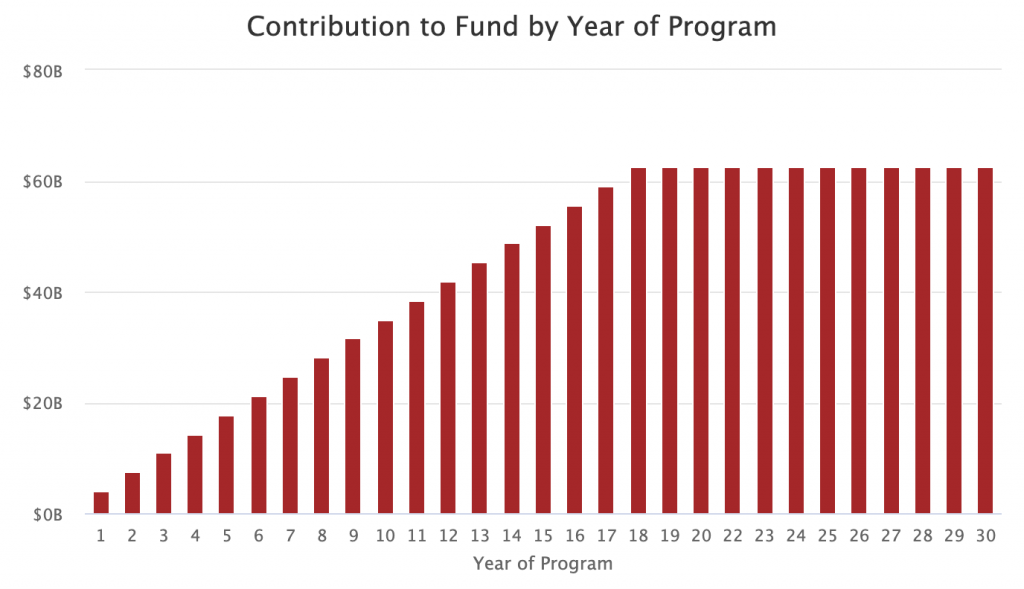 Booker says he intends to invest the fund’s capital conservatively with the goal of achieving a 3 percent nominal rate of return. Based on the contribution schedule above and the same assumption of 4 million annual births, the fund will grow in size to around $715 billion in year 18 of the program. The fund’s size levels out in year 18 because, in year 19 and every year afterwards, the program pays out lump sum grants to 18-year-olds. 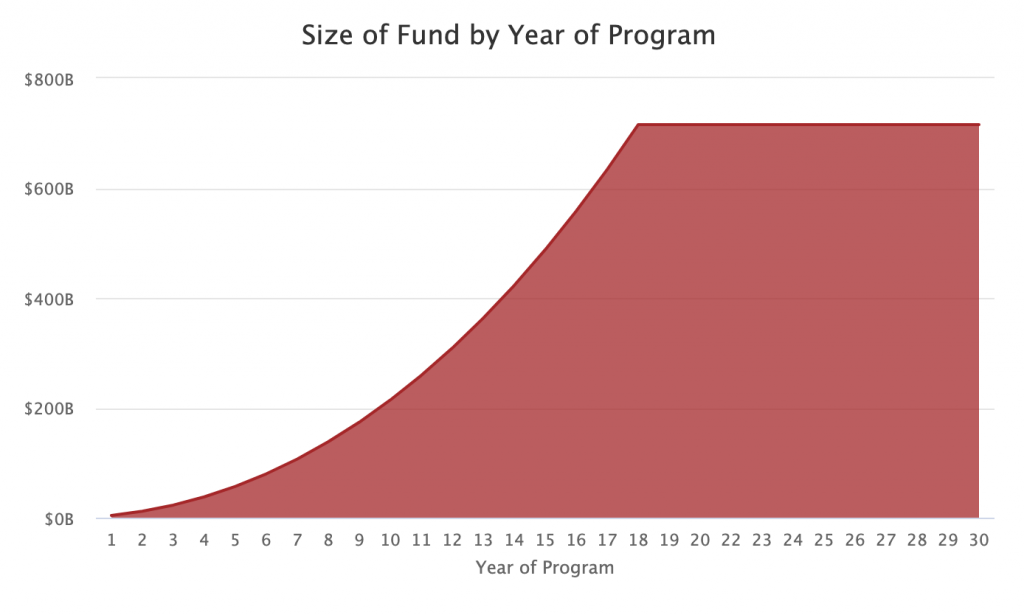 After the fund is fully capitalized in year 18, it will be putting off around $19 billion per year in investment returns. That return is then combined with the $62.5 billion annual contribution to finance the annual grant for 18-year-olds. To be clear, this is not how Booker frames what he is doing, but this is the cleanest explanation of how it would work overall.

Starting in year 19 of the program, every 18-year-old would receive a grant of money. According to Vox’s piece on the proposal, the average grant would be around $21,000. The precise grant given to each individual varies based on the earnings record of their parents during the prior 18 years. Thus, 18-year-olds whose parents had high incomes during their childhood will receive a lower grant while 18-year-olds who parents had low incomes during their childhood will receive a higher grant.

Grant recipients will not just get a $21,000 check, but instead will be forced to put the money towards a list of approved items. Right now, the three items mentioned are education fees, down payments on a home, and retirement accounts. The goal here is to ensure that the money goes into building each individual’s wealth in some way.

From my perspective, the main good thing about the program is that it is at least an entry point into the idea of a dividend-paying social wealth fund, something we have been pushing here at People’s Policy Project. The core feature of Booker’s plan is to build up a moderately-sized pile of publicly-owned capital, the return from which will be paid out in the form of a grant to 18-year-olds. This is structurally similar to my social wealth fund proposal, just much more modest in scope.

The bad things about the proposal are unfortunately somewhat numerous.

But if one insists on doing a program that involves providing lump sum grants to 18-year-olds, there are ways of doing that better as well.

Second, start providing the grants to 18-year-olds right away. The ostensible reason why Booker’s plan waits nearly two decades before actually providing grants to anyone is because it uses that time to capitalize the (in the exercise above) $715 billion social wealth fund. But you do not need 18 years to capitalize a social wealth fund that large. At the end of last month, the total market capitalization of publicly-traded US companies was around $32 trillion. This means that a one-off 2.2 percent market capitalization tax, payable in scrip rather than cash, could capitalize the fund in year one. This should allow you to start paying out grants in year two.

Finally, get rid of the restrictions on what the money can be spent on. This keeps the administrative costs and surveillance of the program down. It also allows people to put the money towards the best use as they see it. If you do not trust that 18-year-olds can spend lump sum grants wisely, then you probably should reconsider the whole premise of the program in the first place.