Dylan Matthews has a piece at Vox saying that Booker’s Baby Bonds program would nearly close the racial wealth gap for young adults. Matthews’ piece is based on a working paper by Naomi Zewde that uses the PSID to model the effect of providing means-tested demogrants to 18-year-olds. Under the flawed racial wealth gap metric commonly used, it is possible that Booker’s program would significantly reduce it. But under a comprehensive measure, it is hard to imagine how such a program would make much of a dent.

Booker’s plan, in brief, is to spend 18 years gradually capitalizing an approximately $700 billion social wealth fund. In the 19th year, the annual return on that fund plus some current revenue will be bundled together to provide an annual lump sum grant to 18-year-olds. The race-neutral grants will be heavily means-tested based on the earnings records of each 18-year-old’s parents and the spending of the grants will be restricted to approved purposes such as education, retirement accounts, or a down payment on a house.

The plan Zewde writes about in her paper is largely the same as Booker’s plan except the means-testing is done by parental wealth rather than parental earnings records.

How Big Is The Racial Wealth Gap? 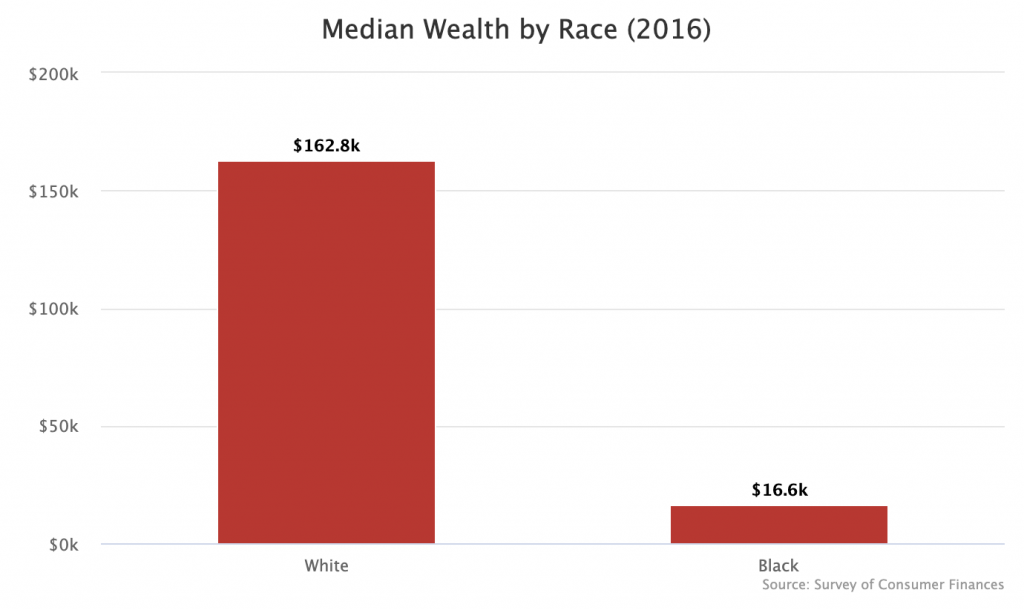 The problem with this conventional measure is that, by comparing median to median, it misses the people who actually own virtually all of the wealth in this country. It is not the middle that owns the wealth, but rather the very top. In 2016, the median white quintile owned just 3.7 percent of white wealth. For black families, the same figure was 2.8 percent. Across all people it was 2.9 percent. 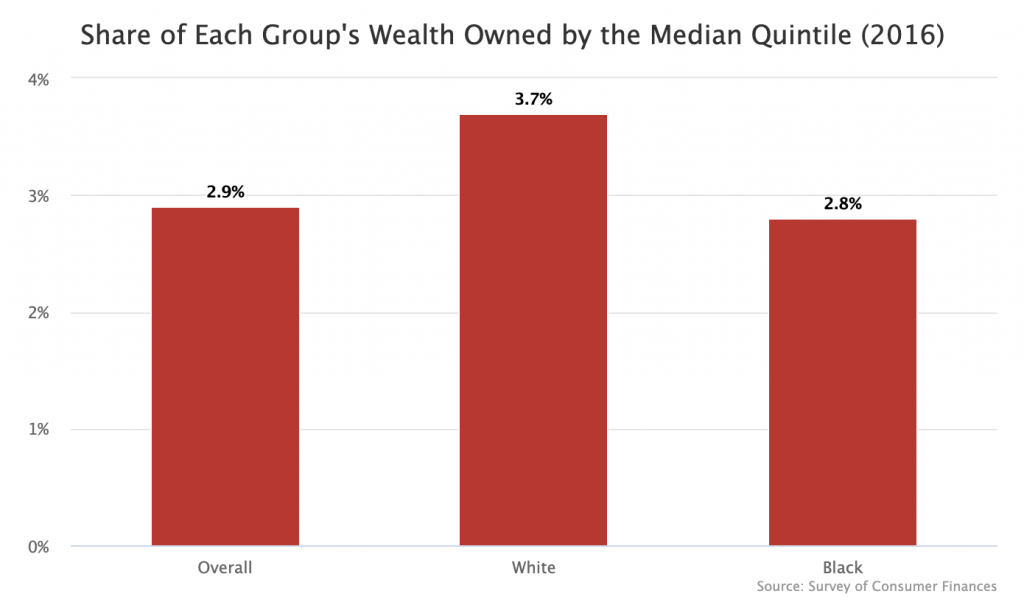 By comparison, the top quintile owned over 85 percent of each group’s wealth. 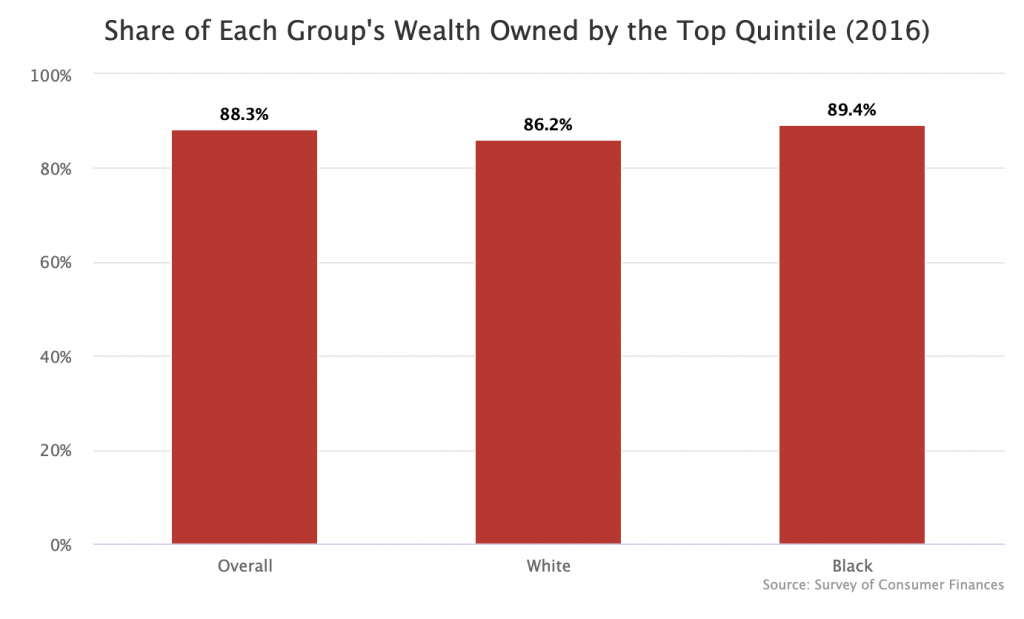 When it comes to wealth, comparing 50th percentiles against one another does not really give you a good picture of the disparity since it compares people who own almost none of the wealth. Instead, as I’ve argued before, the best single statistic for the racial wealth gap is mean wealth. On that measure, the gap is not $146,200 but rather $760,700. Instead of being 10.2 cents on the dollar, the racial gap is 15.5 cents on the dollar, but it is nonetheless much bigger in absolute terms. 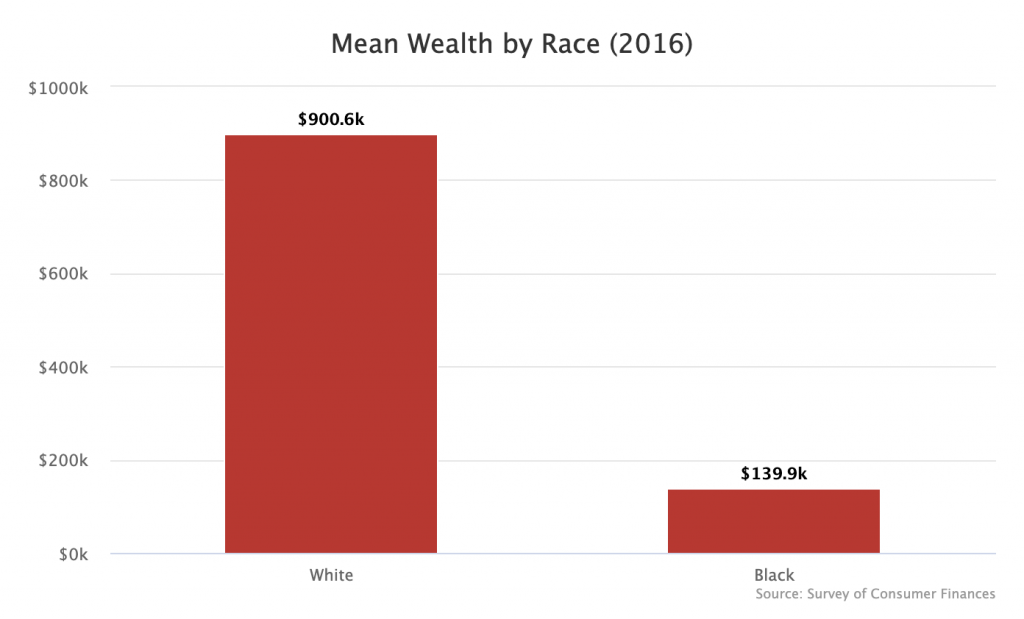 As we’ll see in the exercise below, getting the black median and white median to become equal is relatively easy. So if you define the racial wealth gap that way, fairly modest programs can get the job done (especially if you define it as getting the 18-25 black and white median wealth to line up). But getting mean black and white wealth to line up would require a program vastly more ambitious than baby bonds.

The median black family has a net worth of $16.6k while the median white family has a net worth of $162.8k. Thus, if your sole goal was to get the medians to align, the cheapest way to do so would be to take all black families with net worths between $16.6k and $162.7k and transfer each of them the amount of wealth they need to get up to $162.8k. After this process, the black and white median would both be $162.8k and the racial wealth gap, so defined, would be over.

Some simple math shows that this sort of policy would require transfers of $456 billion, or 0.5 percent of total wealth in 2016.

By contrast, if the goal is to make it so that the black community and the white community have the same total amount of wealth relative to their population sizes (i.e. mean wealth), then the required transfers are $15.2 trillion, or 17.5 percent of US wealth in 2016. If you imagine this program as a direct transfer from white to black (such that each dollar transferred actually closes the gap by $2 dollars), then it goes to $7.6 trillion, or 8.6 percent of US wealth.

What these figures show is that you can eliminate or nearly eliminate the “racial wealth gap” as it is normally understood with fairly modest programs that basically operate by gaming the statistic. Since blacks and whites near the middle of their respective wealth distributions own almost none of the wealth anyways, it simply is not that hard to get them to own the same or similar amounts of approximately nothing. This is basically how the baby bonds policy works.

From that reported starting point, Zewde constructs a counterfactual scenario in which baby bonds were paid out in a means-tested way according to parental wealth. She finds in that scenario that young black median wealth goes to $57,845 while young white median wealth goes to $79,159. This then prompts the conclusion (emphasized by Matthews) that the program reduces the racial wealth gap from young whites owning 16x young black wealth ($46,000/$2,900) to young whites owning 1.4x young black wealth ($79,159/$57,845).

This sort of thing lends itself to a great headline statistic, but it’s not really doing that much to close the overall gap. The age group being focused on here — 18 to 25 — owns just 0.7 percent of the overall wealth (in the SCF data). And then the middle quintile of that age group, which is where the action is really at, owns just 2.4 percent of that wealth (according to Zewde’s PSID analysis). In the baby bond counterfactual, they end up owning 5.2 percent of their age group’s wealth, which is able, along with disproportionate benefit to black families, to get you the eye-popping statistic of nearly eliminating the racial wealth gap.

But if the goal is to converge overall mean black and white wealth over time, this sort of policy just is not going to get you anywhere close to there. Indeed, even these median young adults who have a brief convergence around the time they turn adults will themselves end up diverging again with differential incomes, differential savings, differential rates of return (especially on real estate), and differential inheritances — none of which have significantly kicked in yet at that age but which are the drivers of the continuation of the racial wealth gap.

None of this is to say that you shouldn’t do baby bonds. It’s just to say that you should be cognizant of how much they can actually achieve in their current modest construction. The total wealth gap between the black and white population is over $15 trillion. A program that annually pays out $80 billion of race-neutral grants is not going to nearly close it. Just as it is not that difficult to rack up big reductions in headcount poverty by targeting modest amounts of cash to those right below the poverty line, it is possible to rack up big reductions in the racial wealth gap by delivering modest transfers that disproportionately flow to median black families. But both sorts of policies take advantage of measurement quirks more than they actually eliminate the evil they target.

I have my objections to the way Booker has designed his plan in particular, and of course I’d prefer to use my social wealth fund proposal to eradicate both the racial wealth gap and all other wealth gaps. But, if it is cleaned up in various ways — less means-tested, less restricted in what the grant could be used for, quicker to pay out initial benefits — the baby bond proposal could be a compelling, albeit modest, way to compress the distribution of wealth a bit and thereby trim down racial disparities a bit at the same time.